Last weekend marked the opening of “Thrice Upon A Time” at Magasin 3 Konsthall in Stockholm, Sweden. The exhibition, which runs through December 12, 2010, is the institution’s most comprehensive to date. Curated by Richard Julin, Elisabeth Millqvist, and Tessa Praun, the exhibition draws on Magasin 3’s rich collection of works by established international and emerging contemporary artists. The ambitious show features over 200 pieces of photography, drawing, painting, film and sculpture. Just a week away from the Swedish elections, the opening was filled with political hopefuls and those in the know in Stockholm’s growing art scene. 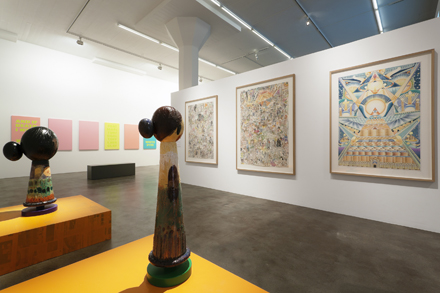 Narrated as a story, the exhibition unfolds in three “chapters” (i.e. thematic points of access to the work on view). Chapter I covers the conventions of art history and provides a fresh look at portraiture. The second chapter focuses on creativity and the artistic process, offering plaques with artists’ reflections about their studio spaces. Chapter III constructs a space where the viewer and his/her associations are in focus, a journey where works from the collection are shown through the lens of the collecting process itself.

Janine Antoni’s self-portrait Inhabit is one of the first images the viewer encounters, and is striking both in content and color. In the photograph, Antoni hangs from a corrective corset, suspended above the ground in a child’s room. The image’s central figure alludes to medieval and Renaissance depictions of the Madonna, but also, with the dollhouse, to Lewis Carroll’s novel Alice in Wonderland. The most obvious reference, perhaps, is to the Mexican artist Frida Kahlo’s 1944 self-portrait The Broken Column. In this work, Kahlo depicts herself naked under her back brace, her long, dark hair flowing and her metal spinal column exposed. Central to Kahlo’s work was a lifelong spinal injury sustained in an unfortunate accident, and “the pain in her many portraits is multifaceted,” explains co-curator Elisabeth Millqvist, “both physical and emotional – love and betrayal.” Antoni’s piece is at once an homage to Kahlo and an exploration of chilhood rooms and collections. In its reworking of canonical images, Antoni embodies the focus of the historically-bent first chapter of the exhibition. 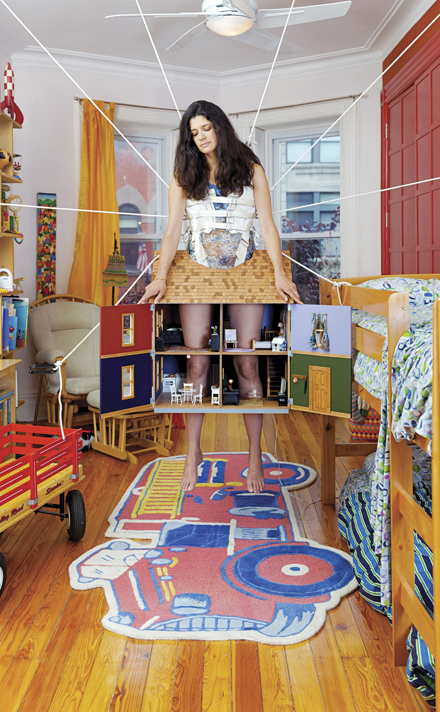 Another piece working with history and personal histories is Matts Leiderstam’s self-portrait, Sarcophagus. Comprised of 84 acrylic paintings, Leiderstam’s canvases lean against one another towards the wall. In denying access to the viewer, the artist forsakes his own physical description. Taken singularly, each painting depicts volcanic eruptions, and refer to what the artist names “the powerful and fatal sexual eruptions” that led to the AIDS crisis. Grouped together, the paintings take the form and length of his own coffin, and the jar resting on top is made to resemble a vase available for mourners at graveyards. In this work, Leiderstam refers to death and life’s fragility, and in so doing, nods to the tradition of memento mori paintings popular in the seventeenth-century Netherlands. In depicting skulls or skeletons as part of their compositions, artists provided viewers with a reminder of their mortality. Some paintings even use the inscription “Ars Longa Vita Brevis” – art is eternal, life is short. In this sense, artists were able to imply their craft’s eternity; while the viewers’ fleeting lives will pass, the artwork will endure. Gabriel Orozco’s Black Kites Perspective can also be read as such. 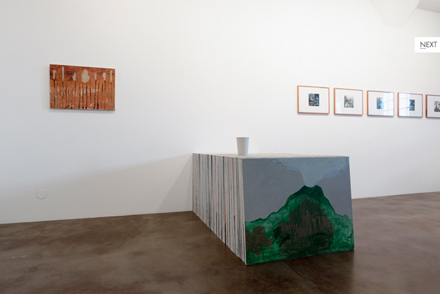 Boo Ritson, Cindy, 2007. All images courtesy of Magasin 3 Stockholm Konsthall unless otherwise noted.Boo Ritson’s Cindy (pictured above) takes as its portraiture technique something very plastic: he paints directly on his subjects and then photographs them. The result is disorienting: we see the individual, under the paint, but the facial features are general. The work is both the painting and the photograph, which both hides and exposes. Boo Ritson’s subjects look cooly at us behind their sunglasses; their faces don’t show expectation, hate, sorrow, anger, fear, or happiness. In that sense, these erasure of ephemeral feelings can also be seen in relation to memento mori.

Ulf Rollof reworks the classical vase of antiquity with his highlighter-yellow sculpture Container. In a break from traditional portraiture, the artist takes just one body part as his focus – the molds of over twenty women’s breasts are used as a decorative border of his vase. Cindy Sherman finds her home in this chapter as well. 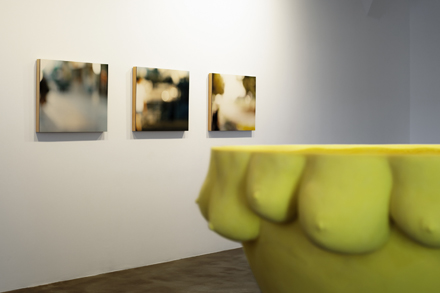 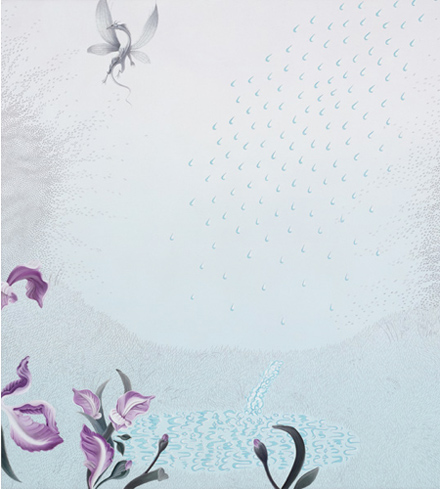 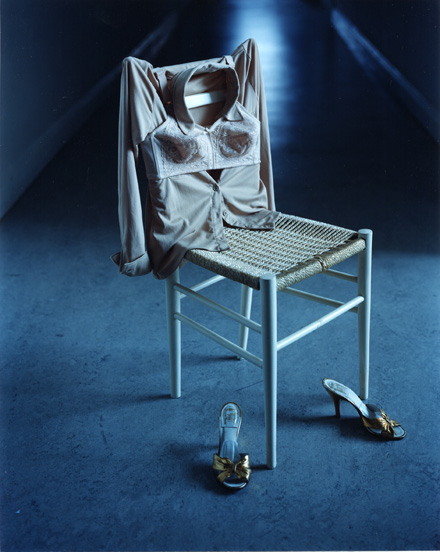 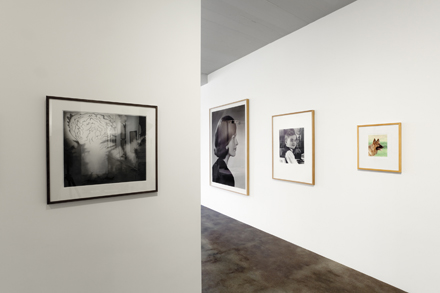 The second chapter deals with creative spaces. It was born from, as curator Tessa Praun explains, the best part of her job – the studio visit. The artist’s studio has long been the subject of fascination for art lovers, curators, and collectors alike. “The studio is the place where ideas and creative momentum meet practical processes, and in some cases,” as in the case of Karin Mamma Andersson, “it is the space itself that inspires creativity.” In Studio (2007), the viewer is allowed a glimpse into the artist’s creative space, and, as such, mind. The typical studio one might imagine – a mess of paints and papers, the physical manifestation of a disorderly genius mind – comes to life. Andersson also brings a chair from her studio into the installation, and the 3D object makes tangible that at which the 2D can only hint. 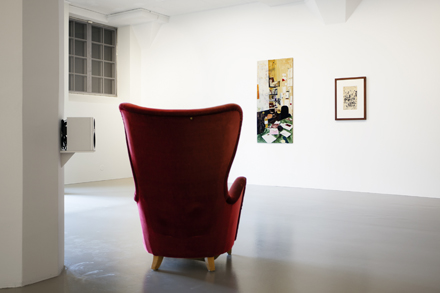 As one moves between the works, borders between real, fictitious, and mental spaces blur and give glimpses of the stories inherent in all the works. In Jens Fänge’s Nachtspiel, the walls themselves become the studio surrounding the viewer. A nod to trompe l’oiel painting of classical origin, a “trick of the eye” which employs realistic imagery to create an optical illusion. Surrounded by a studio, the viewer is suddenly taken out of the comfortable position as history-tracer and put in the position of the creator. The viewer is challenged to create. 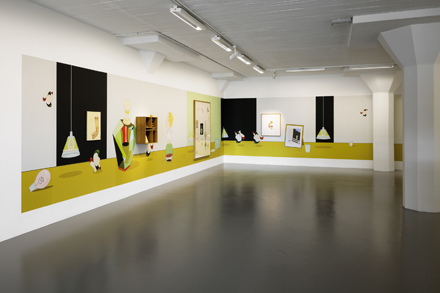 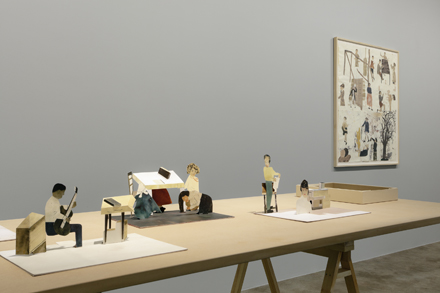 Jockum Nordström, Guitarplayer, The Readers, The Middle-Age, The Table – four scenes from pop up box By and to Jockum. Seven scenes that will be produced later this fall in an edition of 25 by Christophe Daviet-Thery Livres d’artistes et éditions, Paris. 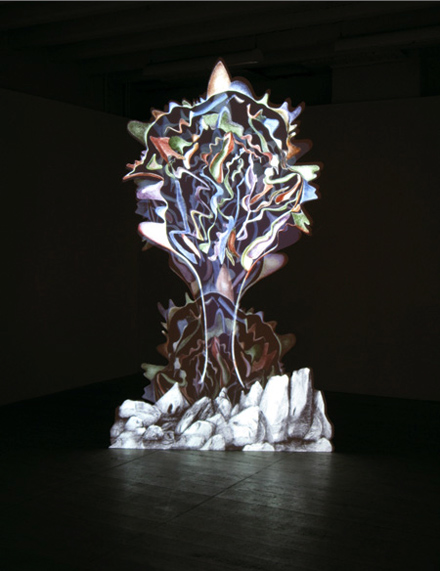 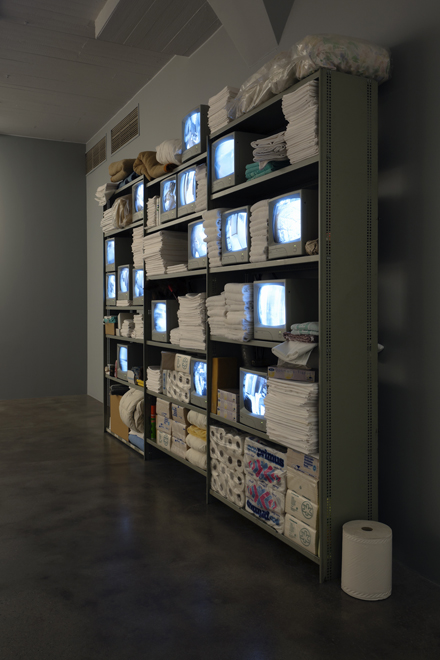 The third and final section is arranged by Richard Julin, who spent generous time conceiving of and constructing a platform in the lower level of the institution, in which objects could be collected and seen. Through the construction of this labyrinth, Julin is able to evoke an exploratory space in which conversations can take place between viewers, between the viewer and the objects, and between the objects themselves.

To Julin, exhibitions mean “people encountering ideas in the shape of artworks,” and he strives to create an exhibition architecture “in which you as a visitor can experience the art in a spatial environment that comes from the works themselves.” The associative nature of the installation hopes to “create the joy of discovery in visitors similar to a collector’s enthusiasm.” 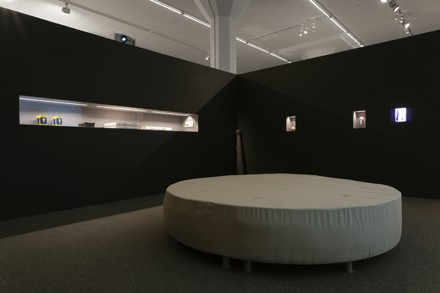 Installation view, Thrice Upon a Time. 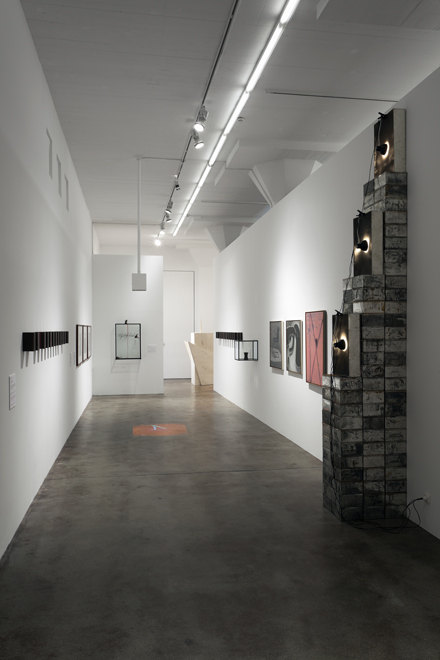 The title of the exhibition, a play on the classic fairytale opener “Once Upon a Time,” alludes both to the institution’s name, as well as the three-fold story occuring within the show. Taken one by one, the chapter divides create links between objects which better allow them to tell their stories. It is up to the viewer to decide whether or not these links are cohesive. But taken as a whole, this all-encompassing exhibition underlines the richness of Magasin 3’s collection, and proves that “the stories and ancedotes are more important than the objects themselves.”

Magasin 3 Stockholm Konsthall is a privately funded art space with a collection of approximately 600 works. Founded in 1987, it filled a gap in the national scene and quickly became one of the most important spaces for exhibiting mid-career and internationally-established artists. Magasin 3 is part of a collaboration of FACE (Foundation of Arts for a Contemporary Europe), a newly formed group of five European arts nonprofits that also includes Athens’s DESTE Foundation, the Ellipse Foundation of Cascais, Portugal, Fondazione Sandretto Re Rebaudengo of Turin, Italy, and Paris’s La Maison Rouge.

This entry was posted on Thursday, September 16th, 2010 at 1:00 am and is filed under AO On Site, Go See. You can follow any responses to this entry through the RSS 2.0 feed. You can leave a response, or trackback from your own site.