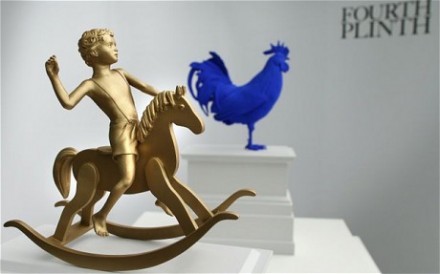 In the center of London, Trafalgar Square’s Fourth Plinth will display sculptures of a bronze boy on a rocking horse in 2012, and a bright blue rooster in 2013. Danish artist Michael Elmgreen and Norwegian artist Ingar Dragset created Powerless Structures, Fig. 101 to playfully contrast the ‘ordinary’ and a hope for peace against the other plinths’ weathered war heroes. Hahn/Cock, by German artist Katharina Fritsch is a colorful 14 foot tall addition to the square, representing regeneration and awakening, as well as male domination (with no specific nationality). 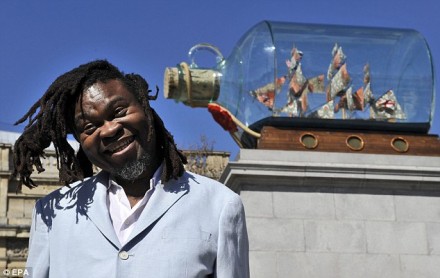 Yinka Shonibare, next to his Nelson’s Ship in a Bottle. Via Daily Mail

Replacing Yinka Shonibare‘s Nelson’s Ship in a Bottle, the two winners were selected from six shortlisted works by the Fourth Plinth Commissioning Group and announced by mayor Boris Johnson on Friday. The works will stand upon one of four plinths at the corners of the square; the other three holding traditional sculptures of British heroes, the fourth’s planned equestrian statue of William IV never found the necessary funds and became a platform for contemporary art in 1998. Among the many works displayed, Antony Gormley‘s One and Other (2009) stands out, which included 2,400 people—100 people occupying the plinth each day for 24 days. 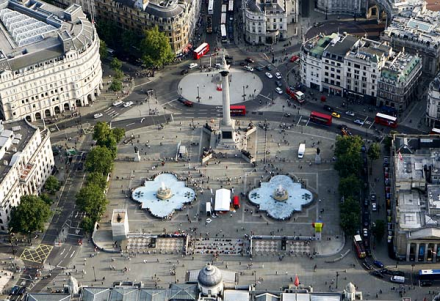 This entry was posted on Sunday, January 16th, 2011 at 3:14 pm and is filed under Art News. You can follow any responses to this entry through the RSS 2.0 feed. You can leave a response, or trackback from your own site.