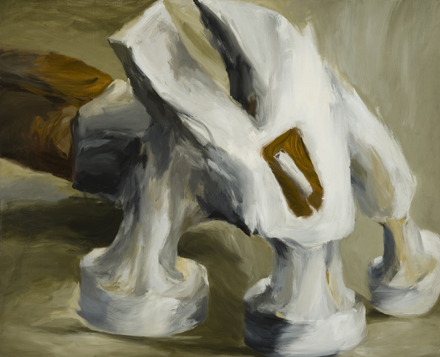 New York in the 1960s and early 1970s held no shortage of female artists making a name for themselves: Louise Bourgeois, Eva Hesse, Lee Bontecou, Joan Jonas, Yayoi Kusama, Jo Baer, and Agnes Martin, among others.  These names ring familiar in our ears, and almost all have had well-earned retrospectives throughout the following decades. But there is one name we do not often see—Lee Lozano.  The new exhibition at Hauser & Wirth sheds light on Lozano’s practice, a legacy shrouded in dramatic acts of rebuff. 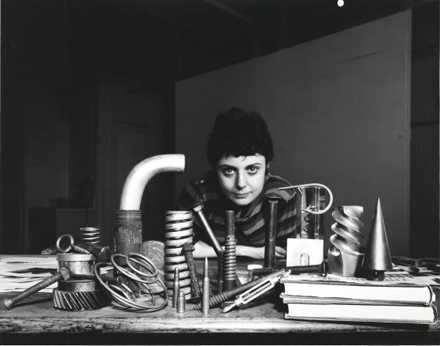 The artist, photographed in 1963 by Hollis Frampton

A self-proclaimed dropout of the art world, Lozano rejected the commerciality of the art scene by committing an act of defiance, in four parts: General Strike Piece, a performance that began in February 1969 as a protest to the banality of the existing artistic atmosphere; Decide to Boycott Women, a twenty-seven year hiatus from contact with her female supporters, including artists, gallerists, and critics, begun in August 1971; Dialogue Piece, an invitation to dialogue that blurred the roles between artist as sender and viewer as receiver. Late 1972 marked Lozano’s final and most daring act of all: Drop Out Piece. After being evicted from her Soho loft in 1972, Lozano moved to Texas, omitting herself (albeit temporarily) from contemporary art history.

Born in 1933, Lozano was educated in Chicago, first with a B.A. at the University of Chicago and then a B.F.A. at the Art Institute of Chicago. Her move to New York in the early 60s brought her into a friend circle which included the likes of Carl Andre, Hollis Frampton, Robert Smithson, Stephen Kaltenbach, and Dan Graham. Along with an initial solo show at the Whitney Museum, she also exhibited at Green Gallery, “the most important avant-garde gallery in New York” at the time, according to Iris Müller-Westermann. Directed by Richard Bellamy, the gallery showcased a new generation of artists, including, among others, Donald Judd, Robert Morris, Dan Flavin, Claes Oldenburg, Tom Wesselmann, James Rosenquist, George Segal, Yayoi Kusama, and Mark di Suvero. 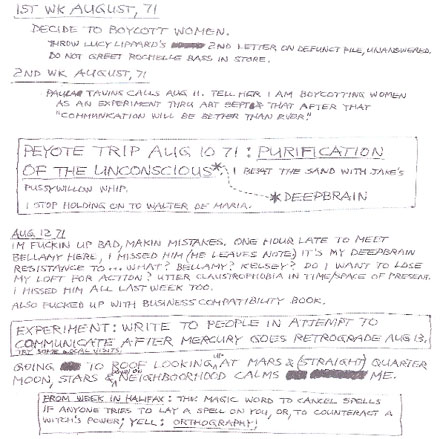 It takes a long and deep investigation into her work to understand what Lozano was like as an artist, and as a person. For one, she was manically productive; considering that Hauser & Wirth’s Tools show exhibits just the artist’s paintings and drawings of tools from the years 1963 and 1964, this is not hard to believe. One of her earlier notebooks reveal telling mantras, such as, “Making art is the greatest act of all,” “Ideas are the most powerful thing in the world,” and the oxymoronic “Win first don’t last,” and, “Win last don’t care.”

Her 2010 retrospective at the Moderna Museet in Stockholm organized the works into eight categories: early works and beginnings in New York, the Airplane series, A phallic world, Tools, abstract paintings, text-based conceptual works, “the end of painting,” and the Wave series.

Characterized by what curator Iris Müller-Westermann calls a “nervous resetlessness,” Lozano’s early work is comprised of still lifes sketched in her studio. Her airplanes are interpreted as “an eternal cycle of energy that is absorbed only to be regurgitated and re-circulated,” while her phallic works are described as negotiations of power, potential, and restrictive forces of success. Lozano’s abstract paintings, reaching a peak of geometrical clarity in 1965, were explorations in the artist’s understanding of space; similar work was being done by the conceptual and minimalist artists of the era, such as Donald Judd, Sol Lewitt, and Mel Bochner. Lozano’s Wave series consists of eleven canvases painted between 1967–1970. Conceptualized as scientific experiments about the electromagnetic spectrum from an artistic approach, Lozano writes, “I wanted to give the people a fantasy of being in space.” During this time, the artist was also considering where her work could go beyond painting. The rise of conceptual art prompted Lozano to perforate her earlier abstract paintings. 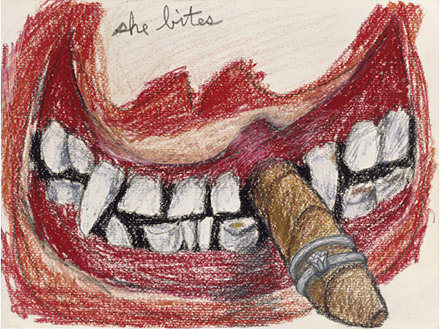 No title (she bites), 1962. From Lozano’s 2010 retrospective at Moderna Museet, Stockholm. 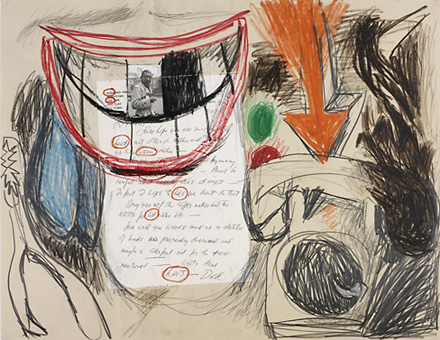 Among the everyday hardware on view in Tools are hammers, razors, and screwdrivers. Energy emanates from each tool, threatening to jump off the page or canvas in an anthropomorphized rampage. Lozano’s tools grew from her surreal, colorful mouth sketches, developing into overtly sinister, cheeky cartoons she dubbed “comix.” At times precise and patient, at other times loose and violent, Lozano’s hand was as versatile and changing as her motifs. Critic/curator Helen Molesworth described the tool works as “lushly painted and lustily suggesting the violent, combinative nature of sexual desire… the inanimate is not a working concept for Lozano—everything possesses some kind of energy, life, or drive. This is true not only of content but also of form.” 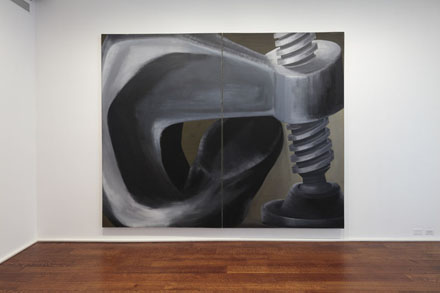 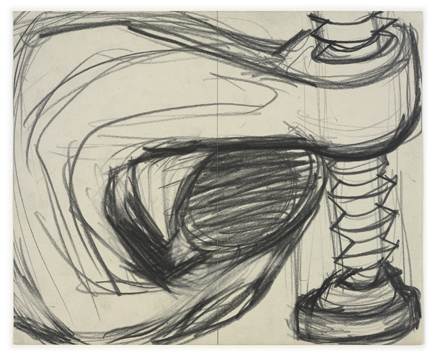 While the earlier, slightly expressionist tool paintings read as creamy and almost soft, the later tools become hard, cold, and mean. As Molesworth suggests, this visual transition acts as a harbinger for Lozano’s conceptual “language” pieces which come into being directly after.  The suggestive nature of the tools isn’t indecipherable, they resemble genitalia. Molesworth continues, “Deleuze and Guattari’s theories of the hookups between machines and bodies seem mild-mannered compared with Lozano’s whacked-out erotic porosity. Penises sprout from ears and are propelled out of revolvers. Toasters get plugged into cunts. Assholes spit Swingline staples. Tits harden in excitation to cock-like turgidness… In a series of drawings of her studio, also made in the early ’60s, electric sockets, water spigots, and radiators are conduits not only of energy and heat but of a sexual life force that appears ready to vaporize the architecture.” Playing off the metaphor, Molesworth writes that “Lozano offers a model” in which “you are capable of becoming a tool that transforms the rules of the game.” 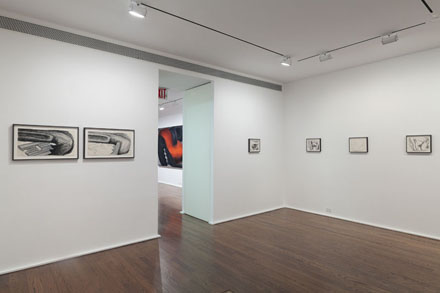 The last we “see” of Lozano are her “language paintings,” in which she inflicted certain rules on her life that mirrored her frustrations and deep-seated ideals. These restrictions were intended to counteract the commercial forces that drove the art market and, as she saw it, disturbed the purity of artistic practice. Unlike performative works by Vito Acconci and Marina Abramovic, one could not buy documentation or photographs of these pieces, and this dematerialization delighted Lozano. Her exit from artistic practice at age 41 was an unprecedented move, one that reads as drastic in its time and nearly impossible to attempt today.

Lozano’s notebooks elucidate her rage and provide insight into her somewhat perplexing attitudes toward her work. Carefully composed and written mottos include “see the extremes—that’s where all the action is,” and were written whenever the thought solidified itself. In 1969, at a hearing of the Art Workers Coalition, she wrote: “I will not call myself an art worker but an art dreamer and I will participate only in a total revolution simultaneously personal and public.” A clear motivation for Drop Out Piece is provided in the unfaltering statement, “If there is no love left in the art world, I do not want anything to do with it.” In a September 1969 notation, Lozano writes, “People (in some ways) are more important than art.” She later removes the parentheses. Throwing Up Piece (1969) was a work that laid the basis for Drop Out Piece, consisting of instructions for the artist to throw the twelve most recent issues of Artforum into the air. 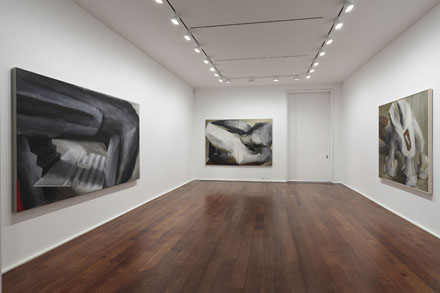 But it was not all confidence in her defiant acts. As Artforum critic Katy Siegel writes, “her withdrawal was conflicted. In the final note to General Strike, Lozano laments having hurt certain individuals in pursuing her larger artistic statement… Lozano’s ambivalence is recognizable to anyone who has questioned the cost of social and financial success. Her desire to separate herself belongs on a continuum not only with artists who have deliberately retreated but also with the anonymous thousands who do not get shown or sold, who either stop making art or continue their work in involuntary privacy… Her work resonates because it dramatizes feelings that most artists—and in fact most people—have.”

Lozano has now become somewhat of a cult figure; her legacy is retold through those she rejected. Art historian Lucy Lippard has written extensively about the artist, calling her life-as-art approach “extreme” and her personality “extraordinarily intense.” PS1 Director Alanna Heiss was acquainted with Lozano; in a recent interview with the New York Times’ Dorothy Spears, she shared that “Lee was cruelly caught in the space between art and madness. [She] was such a great artist. But she was also a pretty dangerous person.”

With this exhibition at Hauser & Wirth, the revival remains in full swing. Her ten-year career is bold and brilliant, and we are sure to see more of her work in years to come. Hauser & Wirth is located on 32 East 69th St. 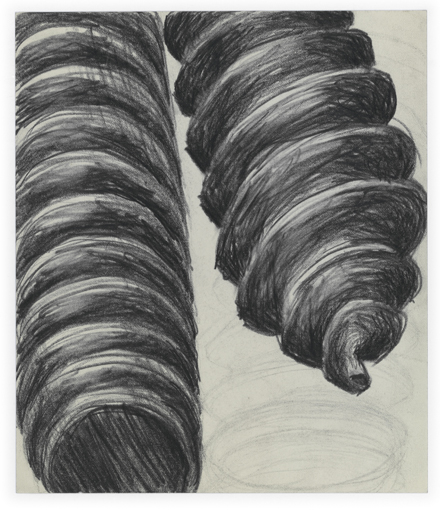 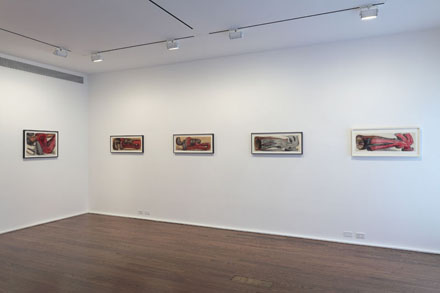 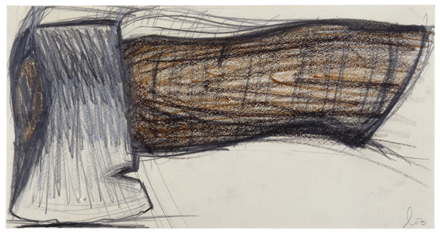 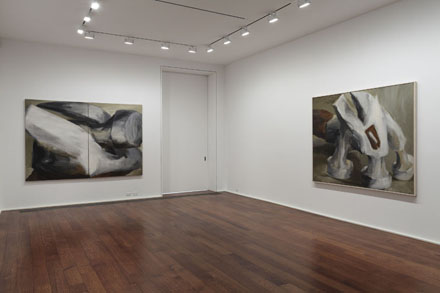 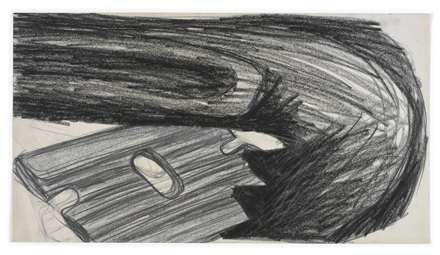 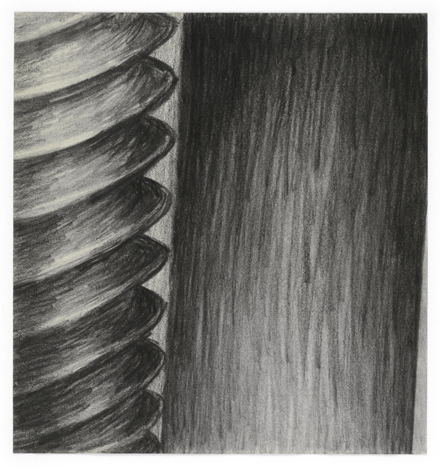 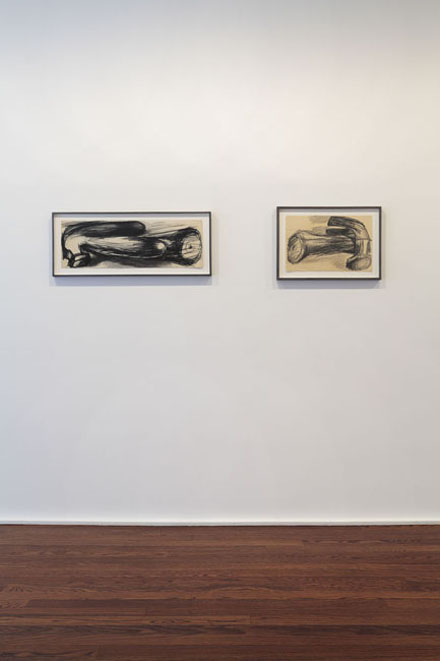 This entry was posted on Saturday, January 15th, 2011 at 1:08 pm and is filed under Go See. You can follow any responses to this entry through the RSS 2.0 feed. You can leave a response, or trackback from your own site.