Christie’s London hosted two back-to-back sales on Wednesday evening that brought in a combined total of £84.9 million. The forty-five lot Impressionist and Modern sale realized £61.9 million for thirty-five lots sold. The estimate of £54-80 million for that auction included a Franz Marc painting that was withdrawn from the sale (it carried an estimate of £900,000-1.4 million). Thirty-one lots at the “Art of the Surreal” sale that immediately followed realized £23 million for twenty-five lots sold. Including a withdrawn De Chirico, the Surreal sale carried a presale estimate of £19-28 million. Bidding stopped at £5.8 million for a featured Gauguin painting (est. £7-10 million) that carried the highest presale estimate of any work offered at both sales. Instead, the evening’s top lot was a fresh-to-market Bonnard painting that broke the auction record for the artist when it sold for £7.2 million against a high presale estimate of £4 million. At the press conference the auction house revealed that the seller of the painting intended to use the proceeds to purchase land in France in order to “save horses.” 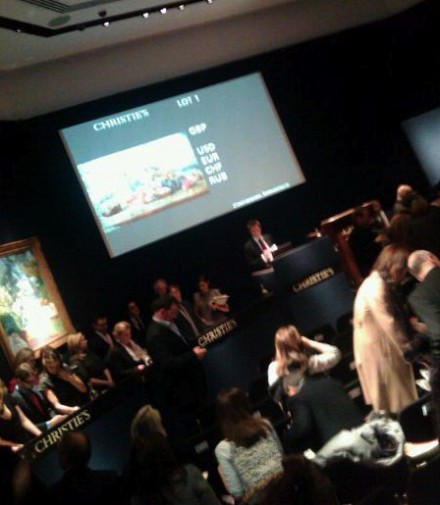 The sale room at Christie’s London on Wednesday evening, via Art Observed

Two other works that were new to the market made the second and third highest prices of the evening. A 1905 Derain painting from a private Swiss collection realized £5.9 million against a high estimate of £6 million. A Degas pastel of two ballerinas that until tonight had been in the same European family since 1899 fetched £5.4 million against a high presale estimate of £5 million. 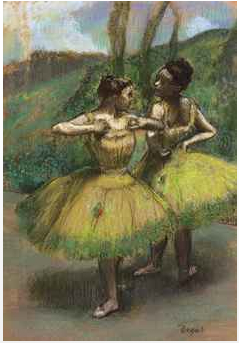 There were ten Picasso lots at the Impressionist and Modern evening sale. Two were bought in, four did not meet low presale estimates before fees were added, and two exceeded high presale estimates. The fourth highest earning lot of the night was his Sur l’impériale traversant la Seine. It sold for £4.9 million after what seemed like a never-ending battle between two phone bidders who took their time raising the price of the painting in increments of £100,000. The painting was one of four being sold by the Art Institute of Chicago in order to fund new acquisitions. The auction house reported that the Institute is very pleased with the £10 million brought in for the four lots, which included another Picasso, a Matisse portrait, and a Braque still life that was one of the top ten lots.

As was the case at Sotheby’s last night, a Giacometti bronze did not find a buyer. All three Pissaro paintings were also bought in, as were works by Kees van Dongen and Chaim Soutine.

Though the sale room emptied a bit for the “Art of the Surreal” auction it was the livelier of the two sessions. The top lot there was a Magritte painting that sold for £4.7 million against a presale estimate of £3.5–5.5 million. The price realized is similar to the Magritte offered at the Sotheby’s sale, which brought in £4 million against a high estimate of £1.2 million.

Another artist record was set with the sale of what was described as a “pivotal” Dalí painting for £4.1 million against a high estimate of £3 million. The auction house noted that it is extremely rare for high quality Dalí paintings to come up at auction, perhaps explaining why the artist record was stuck at about $4 million for nearly two decades before being broken last year at Sotheby’s with a $5.7 million sale.

Several other lots at the Surreal sale performed extremely well. A painted white Max Ernst sculpture sold for nearly quadruple its high estimate of £350,000. The same was true for a Paul Delvaux drawing that sold for £133,250 against a high estimate of £30,000. These results will surely aid Christie’s in positioning itself as the venue for Surrealist works.

Bidders at the Christie’s sales came from 20 different countries, with 23% from the UK, 49% from Europe (including Russia), 23% from the US, and 5% from Asia. In somewhat of a surprise an Asian buyer took home a Giorgio Morandi painting for £1.4 million, indicating that these collectors, whose primary focus has been Asian art, are perhaps acquiring a taste for 19th and 20th century Western art. Tomorrow Sotheby’s hosts the second of its February auctions during a sale of sixty works once belonging to the Geneva-based collector George Kostalitz. Check back for results, and stay tuned for a preview of next week’s Contemporary art auctions.

This entry was posted on Wednesday, February 9th, 2011 at 9:16 pm and is filed under AO On Site, Art News, Auction Results. You can follow any responses to this entry through the RSS 2.0 feed. You can leave a response, or trackback from your own site.