Currently on view at the Lehmann Maupin Gallery is The Parallax View, an exhibition curated by Manuel E. Gonzalez exploring the nature of conflict in the works by acclaimed artists Teresita Fernández, Dan Flavin, Gego, Mary Heilmann, Eva Hesse, Robert Irwin, Agnes Martin, Robert Morris, Bruce Nauman, and Robert Smithson. Centered around the notion of “parallax,” which is defined as “the apparent displacement of an observed object due to a change in the position of the observer,” the exhibition examines how each artist confronts notions of space, light, and observation in their work. Works by such stylistically disparate artists spanning the course of post-war 20th century confront each other through various shapes and forms resulting in an expression of conflict and disharmony.

Bruce Nauman’s Parallax Shell (1971-200)  features a small enclosed room made of white walls with four vertical streams of light. Eva Hesse’s No Title (1966) is a simple black square panel on the wall with a long black cord coiling down to the floor. Robert Morris plays with our notion of perception; his pencil drawing Coil appears to be at once flat and also in perspective depending on which angle it is viewed from. 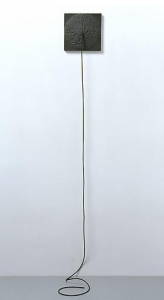 Gego’s square kinetic sculptures are constructed from narrow tubes and chains and seem almost to move before the viewer as they cast their shadows on the wall. A long green fluorescent light-bulb made by Dan Flavin from seven overlapping 4-foot bulbs stretches from ceiling to floor and remains peacefully static. Robert Morris’ large steel Observatory reveals strong circular forms split by a seeming horizontal rod. 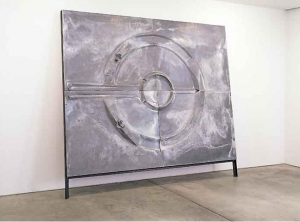 The works in “Parallax View” confront each other tempting conflict and then retreating.  Their performance depends greatly on how the viewer interprets such an ambiguity of forms, space, and light. 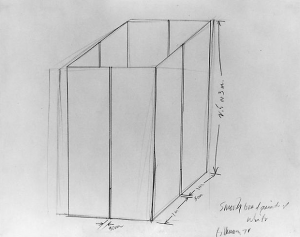 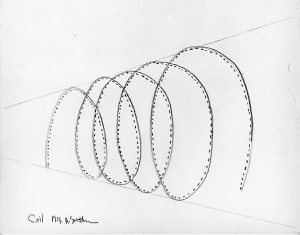 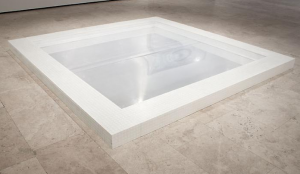 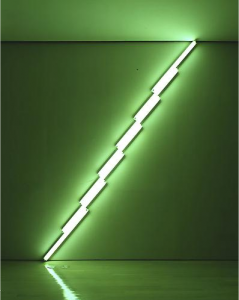 This entry was posted on Tuesday, March 15th, 2011 at 12:14 am and is filed under Go See. You can follow any responses to this entry through the RSS 2.0 feed. You can leave a response, or trackback from your own site.