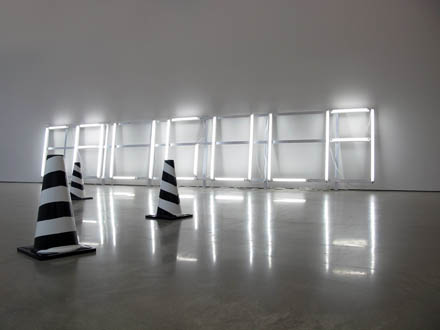 But, What Ends When The Symbols Shatter (2009); Caligula (2010). All images courtesy Bonniers Konsthall unless otherwise noted.

Gardar Eide Einarsson is one of the fastest rising Scandinavian contemporary artists, and his exhibition Power Has a Fragrance currently on view at Bonniers Konsthall in Stockholm is a testament to his momentum. Addressing themes of violence, authority, power, paranoia, and alienation, Einarsson draws heavily on graffiti and street culture, transforming appropriated imagery into sophisticated installations that land like spaceships in a minimalist’s paradise. 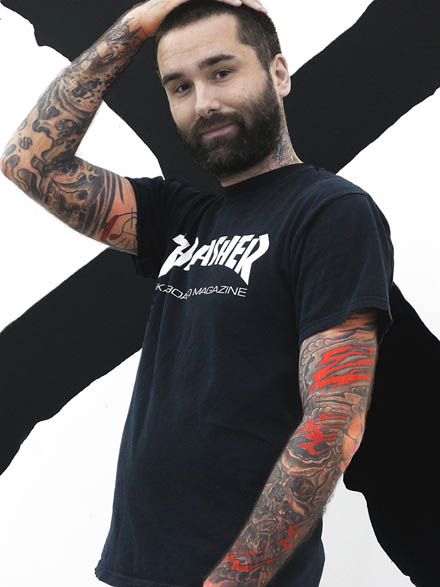 Stockholm, then, is an odd landing spot. It is one of the cleanest cities in Europe, where graffiti is removed minutes after it’s applied. Much like his native Norway, the public’s relationship to the state is controlled in a way that differs greatly from the United States. He explains, “There’s a very different relationship to individualism. It’s almost frowned upon to be excessively individualistic. People are encouraged to have a social frame of mind. . .  . I was just cataloguing all of the repressive imagery,” according to Interview Magazine.

While one may first notice the artist’s skate punk charm, Einarsson has all the credentials of a serious artist. Born in Norway in 1976, Einarsson studied at the National Academy of Fine Art in Bergen and the Staatliche Hochschule fur Bildende Kunste in Frankfurt. After his move to New York City on September 10, 2001 (an experience which Einarsson cites as extremely influential), he entered the Whitney’s Independent Study Program. Since then, he has presented work in the 2008 Whitney Biennial and shown in numerous group and solo shows across Europe and the States, with a recent foray into Japan. Einarsson is represented by Team Gallery in New York, Honor Fraser in Los Angeles, and Standard in Oslo.

The exhibition’s title, like much of Einarsson’s work is an appropriation: in this case it’s a lyric by the post-industrial band Death in June. The song is slow, layered with mechanical sounds, melody, and appropriated speech. But most of all, it’s sinister. Its lyrics read, “This bondage, it has no charms / silence and evil weigh down my arms // We know our god by the things he creates // life, beauty, but most of all hate.” It’s even darker, then, than the Nordic melancholy for which Icelandic artist Ragnar Kjartansson can be considered a poster child. While Einarsson’s work may initially read as sleek or industrial, a deeper look reveals its morose nature. Suicide Mirror, 2007, for instance, is a reproduction of the mirrors that appeared in recent years on the platforms of the Tokyo subway. An attempt to deter people from committing suicide, the mirrors allow people to confront their own reflection in the critical moment. There is, as of yet, no proof of their effectiveness. 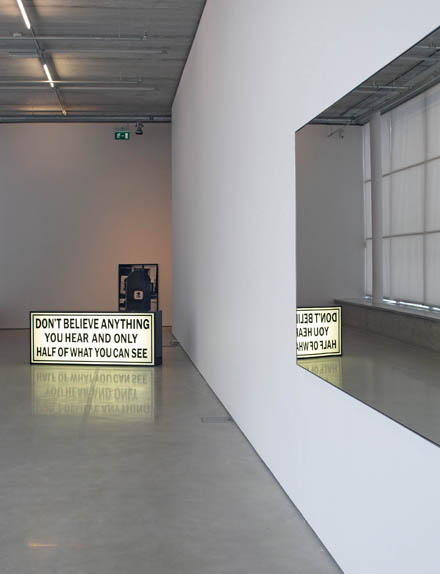 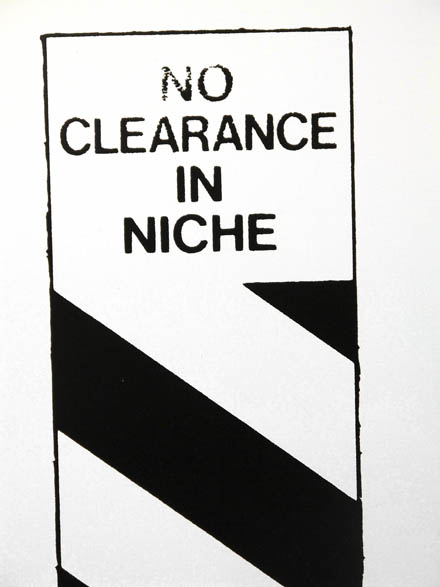 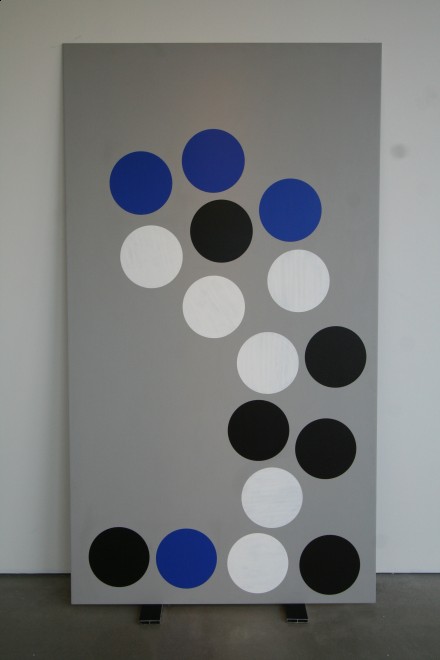 Equally disquieting is a seemingly-benign reproduction of a baby blue pamphlet entitled How to Destroy Bridges, 2010, which was published in 1988 as an instruction manual on warfare techniques. No Clearance, 2008, reproduces the ubiquitous warning signs on New York subway tracks that alert workers to areas where there is no barrier from oncoming trains and they can easily be harmed. At first glance, Untitled (Barrels), 2006, reads like candy dots, but depicts the placement of explosives used by the Oklahoma City bomber Timothy McVeigh.

When it comes to the exhibition’s theme of power, what we learn is that it isn’t a one-dimensional forceful presence, but rather a force that can be expressed in more subtle ways. Accordingly, the magic of Einarsson’s work is not in what can be perceived, but what cannot. Zeigeist (Compound Security System), 2010, for example, is a reproduction of a high frequency sound box that emits a wavelength audible only to young people. It is widely used in Japan to keep teenagers from loitering. In the exhibition, it is nestled in a hallway that visitors are not sure whether or not they are supposed to enter—and most don’t. In this context, there is no way to know whether or not it is really playing; we just have to trust it’s on.

In the central room of the exhibition, Einarsson strays from his typical seemingly-haphazard, casual installation by hanging the paintings in a classical manner and placing the large sculpture in the center. In doing this, he “turns up the white cube-ness of the rarefied white cube space” and “lets the painting be seen as being about painting.” While Einarsson borrows the aesthetic language of giants like Bruce Nauman, Dan Flavin, and Jenny Holzer, one might gain more insight into his artistic practice from drawing comparisons to Frank Stella, Brice Marden, and Jasper Johns. Although he is perhaps best known for his rotating neon sculpture Untitled (JESUS SAVES), 2009, Einarsson is, above all, a painter. In a video interview with Director of Bonniers Konsthall Sara Arrhenius, Einarsson names power and paranoia as major themes of the exhibition, but returns repeatedly to painting—how it feels, and what it means, to paint. 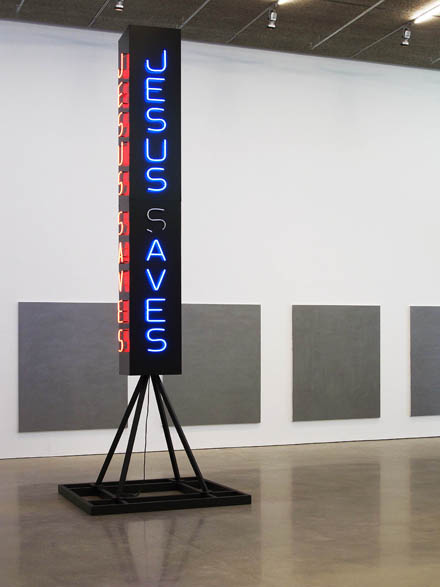 “It’s hard to make painting now without talking about what it means to make a painting,” he shares in one interview. “What does it mean to transfer an image onto a canvas? It’s a relatively pointless exercise—the image already exists, there is no real need for painting anymore. So then, if you do do a painting, it has to also have some sort of awareness of being a painting.” In another interview, the artist is all smiles as he relates, “It’s hard to maintain a critical relationship to painting, just because it’s such an enjoyable activity.”

Einarsson’s process involves sifting through images sourced from the Internet and old books bought on eBay until a certain symbol or concept takes hold. He then boils the symbol down to its essential characteristics. An X, for example, which is a traditional symbol of resistance, is the sole visual element of The Meaning of Limited War, 2010. Information is power, but Einarsson does not assert it on his viewers. Instead of obscuring information and alienating viewers, titles and wall labels include references that are searchable in the public domain. But there is actually a hidden hierarchy here, because, as Arrhenius writes in the exhibition catalog, “Einarsson’s art gets its sustenance from a society in which all information is constantly accessible, but readable only by a few. A place in which . . . . a hierarchy of knowledge has been replaced by different, yet equal types of information. In which every explanation seems to serve to conceal another, which may well turn out to be a lie.” 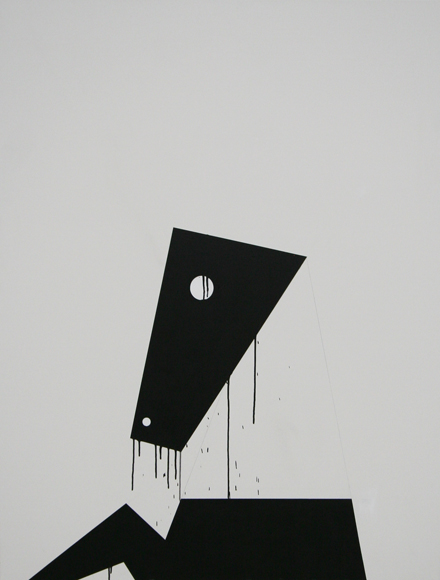 These lies are visible all throughout the exhibition, but nowhere more obviously than in Einarsson’s paintings. In the act of transferring symbols to the canvas, the artist either eliminates or exaggerate image’s painterliness. The drips, he teases, “are sometimes real and sometimes fake.” To heighten their painterliness, the flags the artist paints are one-sided. An obvious nod to Johns, flags are markers of ideologies. While some of Einarsson’s flags scream phrases like “Liberty or Death,” others lack any symbology whatsoever. Untitled (Sons of Liberty), 2011, appropriates the stripes of a historical American flag but drops the stars; the viewer is left wondering what the flag stands for. The United States of Einarsson, perhaps? 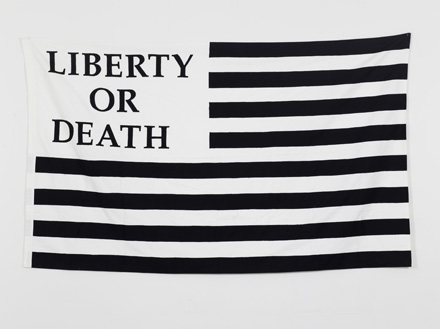 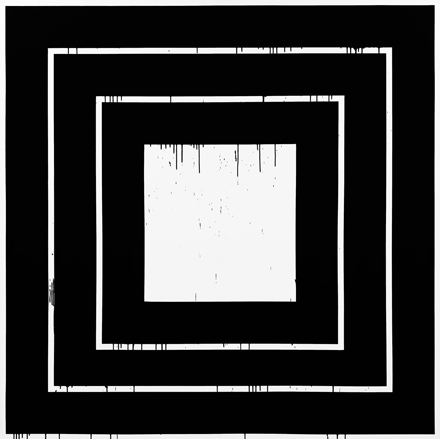 The geometric motif of this painting is derived from a Japanese family crest, but hark back to Malevich’s Suprematist Compositions. 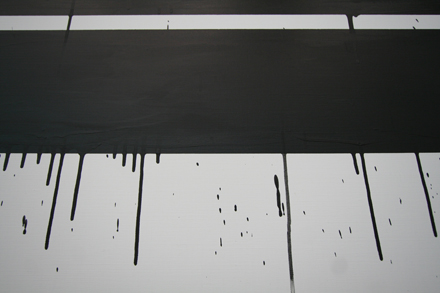 Einarsson also mimics another role, that of a set designer or scenographer. His installations set up situations that mimic public space in a theatrical way, for instance, in Untitled (Dining Cluster), 2006, there are reproductions of the cafe tables used in prison. The design of these tables reflect a certain ideology behind their use: the surface is uniform and hard, with neutral coloring. “The tables,” he explains, “are not intended to look nice or be comfortable but rather to prevent certain uses.” 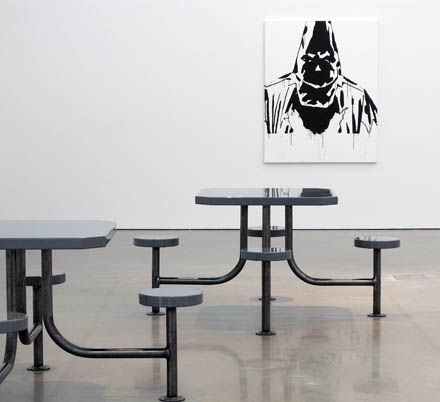 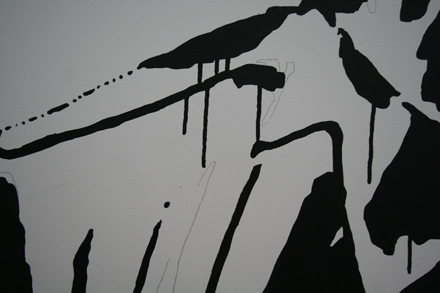 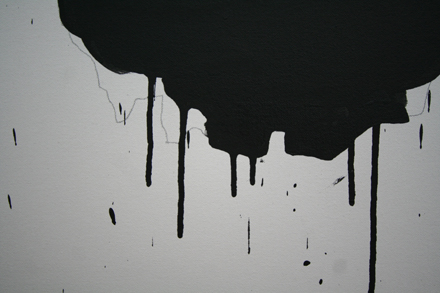 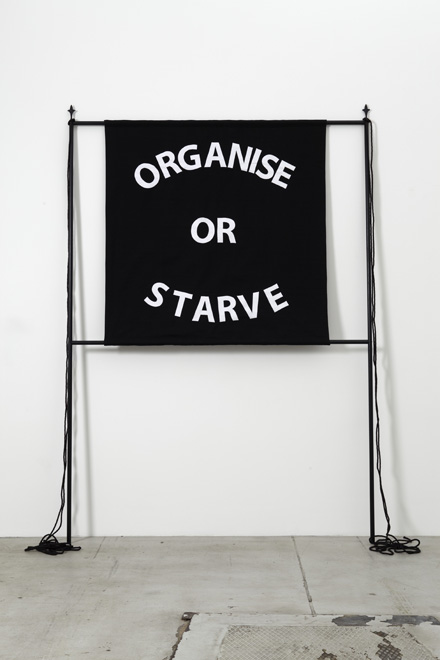 His objects, he says, “are supposed to be a copy or shadow of their real-world selves.” They are props, “they’re not supposed to stand in for real-world things, they’re supposed to just point to other things and to sort of project meaning somehow through that.” The hanging is an important element in this disorientation; Power Has a Fragrance is littered with oversize silkscreen fire hydrants, mail boxes, and lamp posts hung low on the walls, so that the viewer must negotiate his or her own size and distance in relation to them. They are clearly props—they are black and white, gritty, two dimensional—yet we walk next to them as we would in real life, illiciting an amplified awareness. 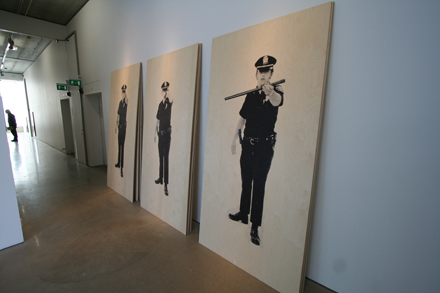 Installation shot: Baton Exercise (1-9) (2007). Here the boards are stacked three by three rather than all in a line like in previous installations. 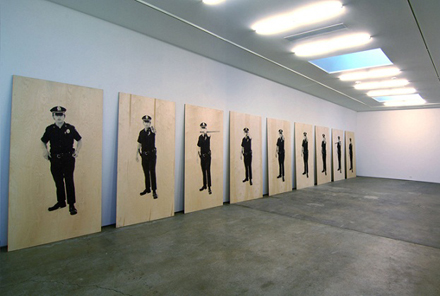 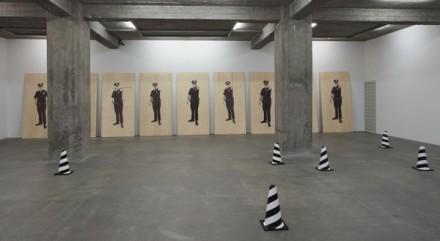 “My intention is to put the viewer in a state of paranoia,” Einarsson states, “where every object in the exhibition carries a secret and symbolic meaning.” For the artist, paranoia is less a theme than a methodology. “My art takes symbols and images from around the world and kind of forces them into this narrative, which is how I think paranoia functions. It’s overanalyzing the symbols around you and forcing them to mean something within an already set system.”

Einarsson rarely works on one piece at a time, preferring to keep objects in dialogue with one another. In line with his investigations in power, he takes particular delight in controlling the viewer’s route and relation to the work. The change in relationships between pieces has been made especially obvious in this traveling exhibition, which was first presented at the Astrup Fearnley Museum of Modern Art in Oslo and the Reykjavik Art Museum before landing in Stockholm (the final leg of the journey is to Kunsthalle Fridericianum in Kassel, Germany later this year). 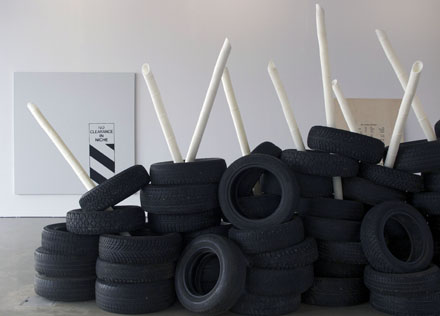 Instead of formalized essays and spacious installation shots, the exhibition catalog reads more like a fanzine. It’s gritty, and littered with studio shots and anecdotal interviews that lend insight into the artist’s practice. It’s a far cry from the formalism of the exhibition, in which each sight line, reflection, and neon glow is considered. 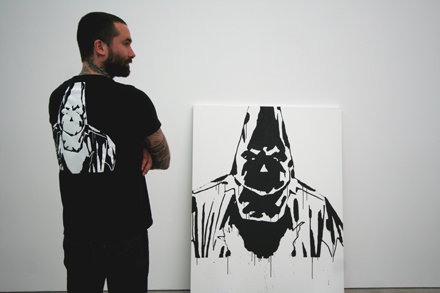 Einarsson wears a t-shirt with the Hate Monger design.

The exhibition’s press release states, “Einarsson appropriates everyday imagery to reveal how mass media, and the advertising industry in particular, controls our beliefs and actions. By re-contextualizing corporate logos, tattoos, and graffiti scripts together within the institutional setting of the art exhibition, he constructs a powerful, sophisticated, political irony.” Bonniers Konsthall, then, becomes an interesting choice of venue. Owned by the largest media company in Sweden, the Bonnier Group, the exhibition space opened in 2006 as a venue for emerging Swedish and international artists. The Swedish public’s noticeable skepticism of corporate ventures into art can be seen in the hesitancy to embrace the new Fotografiska, an exhibition hall devoted solely to photography. It is sponsored by Lumix, Audi, and ClearChannel, to name a few, and the traditionalist art world in the country does not quite know what to think of this American-inspired model. 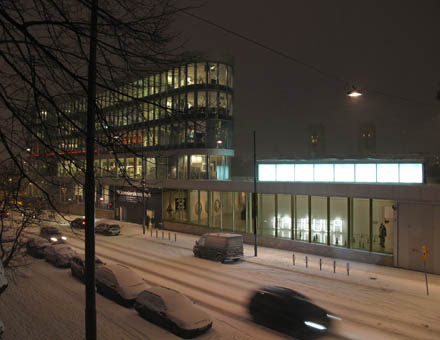 Of course, what Arrhenius calls Einarsson’s “captivating visual spareness” and “cool elegance” lends itself magnificently to the austere Konsthall, but it’s unclear what Arrhenius implies when she cheekily writes in her introduction to the catalog that, “The art world nods in agreement, even if it does not know the code.” We might take it as a challenge to learn the codes: this exhibition requires patience, multiple visits, and follow-up research, but the reward is in the questions it provokes. 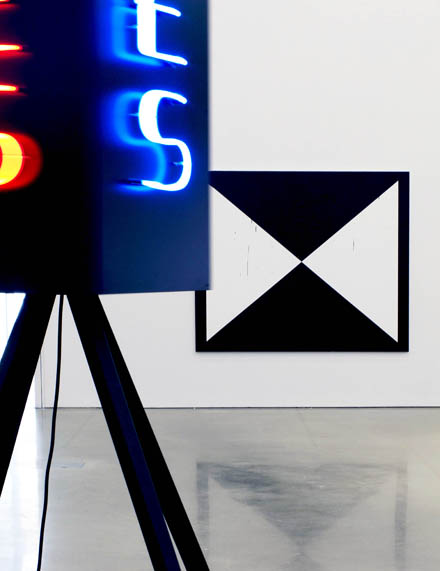 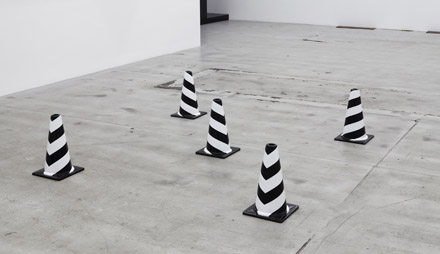 This entry was posted on Thursday, March 3rd, 2011 at 10:54 am and is filed under Go See. You can follow any responses to this entry through the RSS 2.0 feed. You can leave a response, or trackback from your own site.