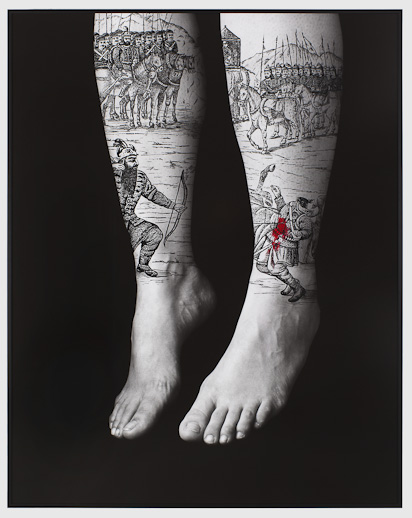 Shirin Neshat’s newest photographic series and video installation is currently on view at Gladstone Gallery. The exhibition’s title, Book of Kings, comes from the ancient book Shahnameh (Book of Kings), a tragedy written by the Persian poet Ferdowsi in the tenth century that tells the story of the mythical and historical past of Greater Iran. A collection of portraits of Iranian and Arab youth with calligraphic texts and illustrations covering their skin, Neshat’s artistic practice examines the conditions of power within the social, cultural, and political structures in the Middle East while also addressing universal themes of the human condition. 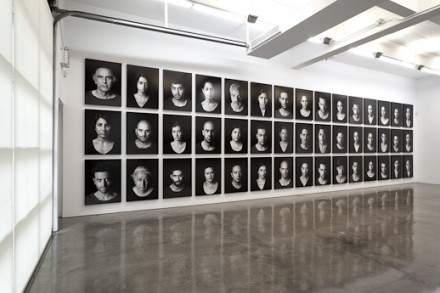 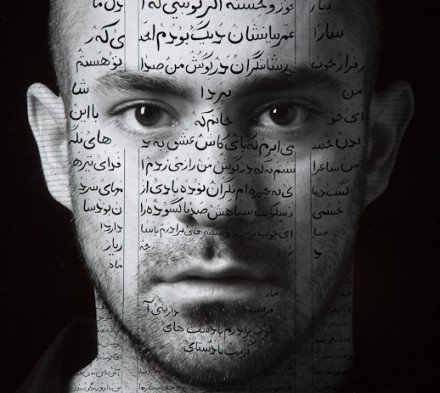 Passages and illustrations from Shahnameh are cast on a selection of portraits, linking them to a rich ancestral history. Contemporary Iranian poetry and letters of Iranian prisoners veil the skin of other subjects, solidifying them in the reality of the present. The occasional red of violent smatterings of blood within the illustrations is the only color that appears against the stark black and white photos. Her work is imbued with codes and histories that are immediately recognized by an Iranian viewer, but easily missed—or misunderstood—by Western viewers. Nonetheless the core of her work, the poetic assertion of human rights, resonates at a universal level. 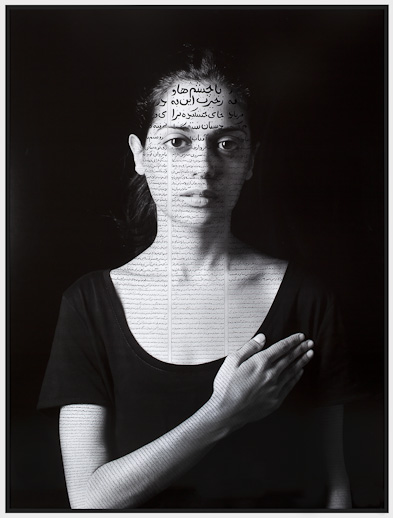 Portraits are divided into three groups: The Masses, The Patriots, and The Villains, groups key to the 2009 Iranian elections and the protests of the Green Movement which followed. While the composition of the photos are minimal, the confrontational gaze of the individuals and the calligraphic scripts adorning them bring a powerful voice to each subject, highlighting the conflicting powers of love and violence that are at play. 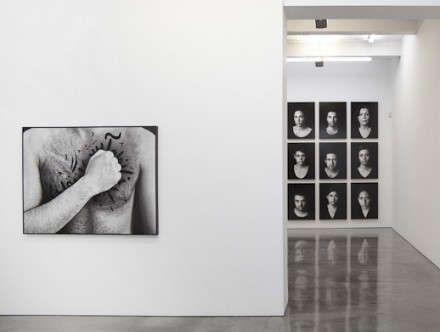 Born and raised in Iran, Neshat immigrated to the United States in 1974. She is arguably the best-known contemporary Iranian artist working, and has received critical attention for her provocative and stunning photographic, video, and cinematic practices. In a 2005 interview she states, “I try to find beauty in the middle of the horror, and vice versa,” she says. “Sometimes, really horrible things—you can turn into a weapon of beauty.” 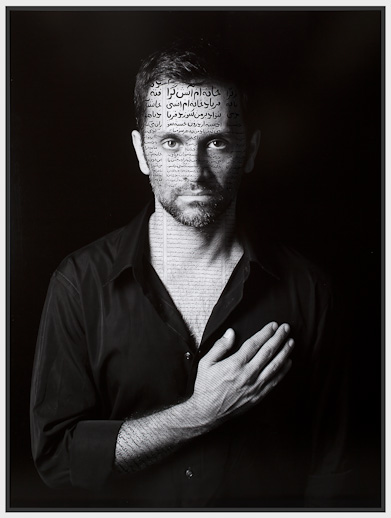 Obesity, Fitness & Wellness Week October 23, 2010 Research findings, ‘Physiological significance of the peptidoglycan hydrolase, LytM, in Staphylococcus aureus,’ are discussed in a new report. According to recent research published in the journal Fems Microbiology Letters, “Autolysins in bacteria are peptidoglycan hydrolases with roles in growth, turnover and cell lysis. LytM was identified as the only autolysin in a previously reported autolysis-deficient (lyt(-) ) strain of Staphylococcus aureus.” “Purified LytM has been studied in great detail for its lytic properties and its production is elevated in vancomycin-resistant S. aureus. However, the postulated roles of LytM in S. aureus are largely speculative. Studies utilizing a reporter strain where the lytM promoter was cloned in front of a promoterless lacZ gene and fused in S. aureus strain SH1000 suggest that the expression of lytM is the highest during the early exponential phase. Additionally, lytM expression was downregulated in agr(-) mutants. The expression of lytM was not affected by the presence of cell wall inhibitors in the growth medium. To further determine the significance of LytM in staphylococcal autolysis, the gene encoding LytM was deleted by site-directed mutagenesis. The deletion of lytM, however, did not alter the rate of staphylococcal cell autolysis. Surprisingly, when the lytM mutation was combined with the lyt(-) mutant, the lytic activity band of the lyt(-) strain was still apparent in the lytM:lyt(-) double mutant. Purified full-length His-tagged LytM did not demonstrate any lytic activity against S. aureus cells. Surprisingly, cultures of S. aureus lytM deletion mutant lysed at a significantly faster rate compared with the wild-type S. aureus in the presence of oxacillin,” wrote V.K. Singh and colleagues, Kirksville College of Osteopathic Medicine (see also Genetics and Staph Infections). see here at still university go to site at still university

The researchers concluded: “The findings of this study raise questions about LytM as an autolysin and the significance of this protein should thus be investigated beyond its role as an autolysin.” Singh and colleagues published their study in Fems Microbiology Letters (Physiological significance of the peptidoglycan hydrolase, LytM, in Staphylococcus aureus. Fems Microbiology Letters, 2010;311(2):167-75).

This entry was posted on Sunday, February 5th, 2012 at 2:09 pm and is filed under Art News, Go See. You can follow any responses to this entry through the RSS 2.0 feed. You can leave a response, or trackback from your own site.