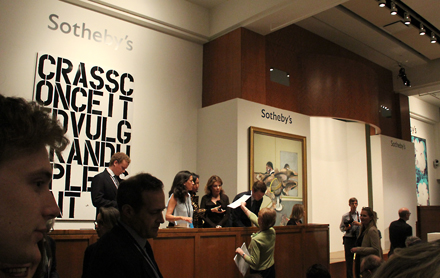 Sotheby’s staff preparing for the sale. Photos on site for Art Observed by Aubrey Roemer unless otherwise noted.

After Tuesday night’s multi-record breaking sale at Christie’s, last night’s Contemporary Evening Sale at Sotheby’s seemed to hold a somewhat lower energy, possibly a result of the second consecutive week of auctions and fairs wearing on the collectors. Yet the sale totaled $266 million—within Sotheby’s pre-sale estimate of $215–300 million—a number considerably higher than last May’s Contemporary Evening Sale total of $128 million. Seven of the artworks sold at more than $10 million, and there was an overall sell-through rate of 80.7%. In a post-sale press conference, Sotheby’s Head of Contemporary Art, Alex Rotter, commented “the market is very healthy with active bidding.” 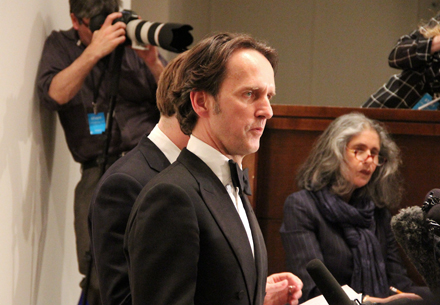 Tobias Meyer giving a press talk about the sale. 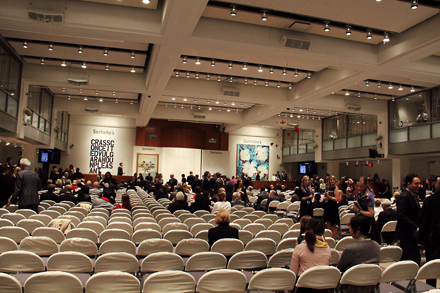 The salesroom filling up at Sotheby’s Contemporary Art Evening Sale. 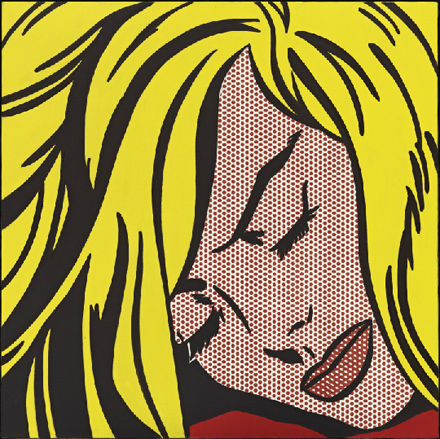 Deemed “the cover girl of the night” by Tobias Meyer, Roy Lichtenstein‘s Sleeping Girl tied for the top lot with Francis Bacon‘s Figure Writing Reflected In a Mirror for $44.8 million apiece—nearly $5 million above their high estimates of $40 million. Both paintings garnered bidding from all over the room as well as on the phones. Sleeping Girl fetched a new world record for the artist at auction, just surpassing the old one of $43.2 million. The hammer price was met with applause from the salesroom. Meyer attributed these soaring prices to the “global demand for masterpieces”—a recurring theme throughout these past two weeks. 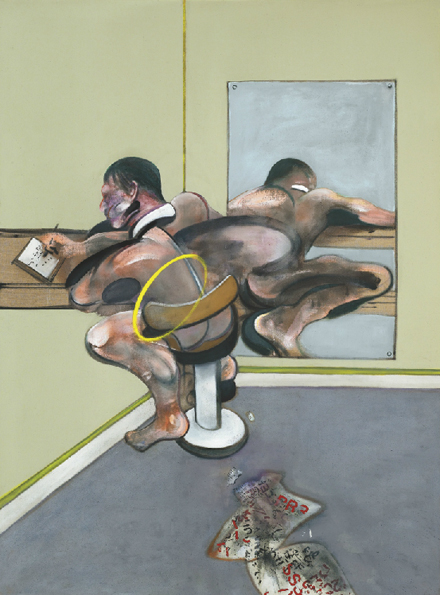 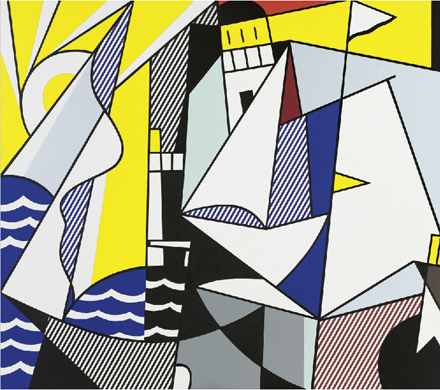 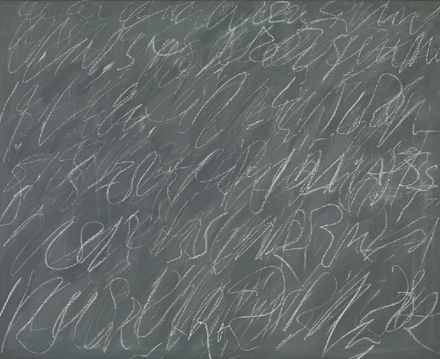 In further evidence of collector’s desire for works by Contemporary masters, Lichtenstein’s Sailboats acheived $11.8 million, well above the anticipated $6–8 million. This placed the artwork as the sixth highest grossing item from last night’s sale. Another Contemporary masterwork that obtained a spot in the top lots was Cy Twombly‘s Untitled (New York City). Placing as the fourth most expensive artwork at $17.4 million, it fell within its projected $15–20 million price range. 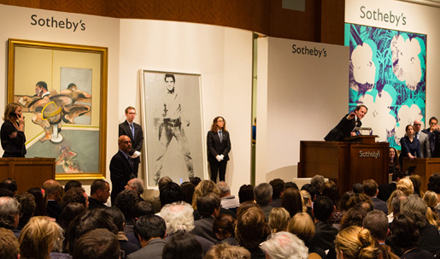 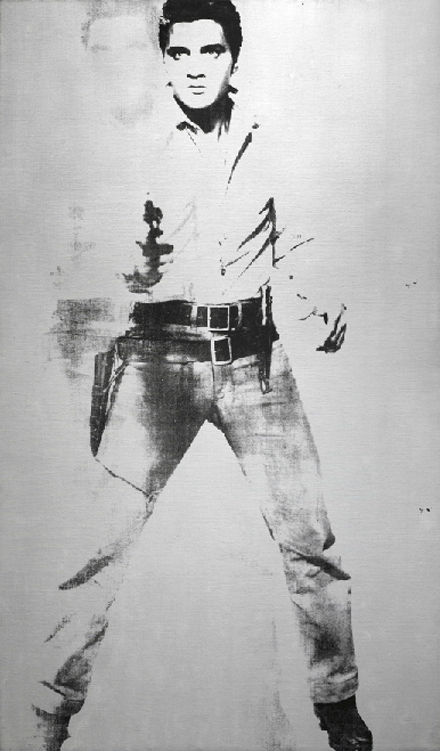 The third highest grossing lot at $37 million—but at the lower end of its $30–50 million estimate—was Andy Warhol‘s Double Elvis (Ferus Type). Among the bidders for this painting were Warhol collector José Mugrabi and a man across the aisle from him. Mugrabi bid $30 million for the piece, and before countering, the opposing man sipped from a glass of water, prompting Meyer to retort, “a drink of water and then we can continue with the bidding.” The final bid came from Mugrabi, adding another Warhol to his vast collection and also in doing so supporting pricing for the Warhol market. During the post-sale press conference, when questioned about how Sotheby’s felt regarding the final price for Double Elvis (Ferus Type), Rotter said, “It’s a successful price, but you always hope for more.” 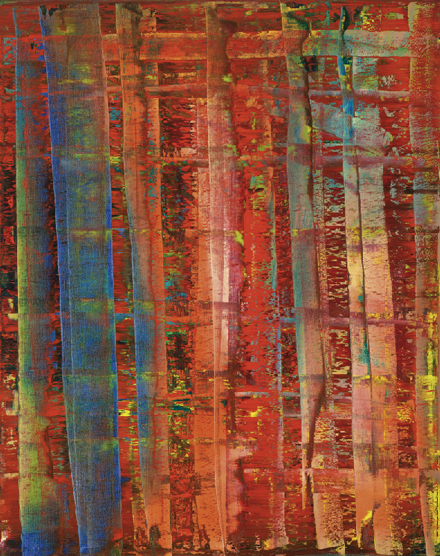 Similar to Christie’s results on Tuesday evening, Gerhard Richter once again had two paintings ranking in the top ten lots. His colorful Abstraktes Bild quickly reached its high estimate of $10 million, and then slowly climbed to an exceptional price of $16.8 million. After the slow bidding war over the phone and in the room came to an end, the salesroom erupted in applause. Additionally, Richter’s Wolken (Clouds) achieved the 10th highest price for last night’s sales at $5.6 million, within the estimate of $5–7 million. 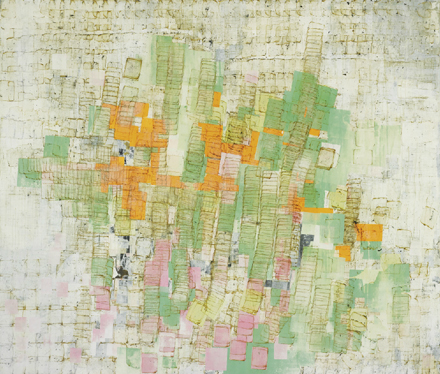 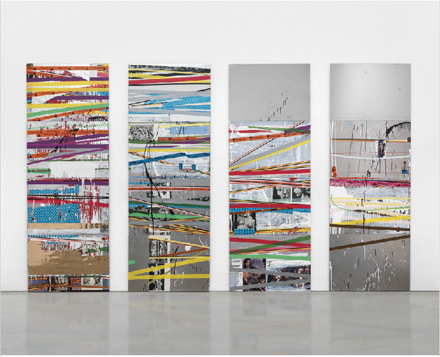 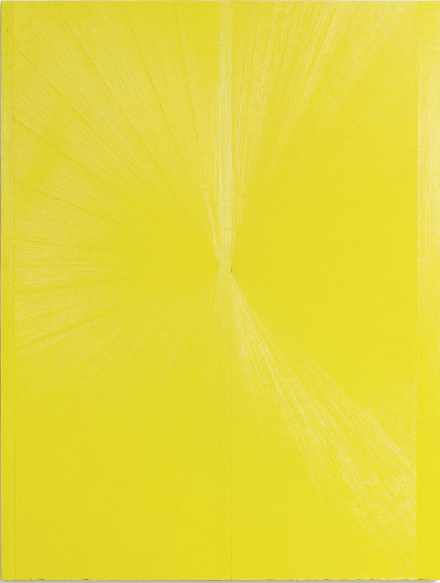 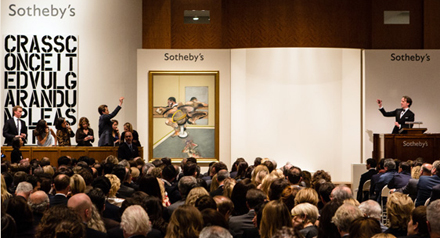 Overall, Sotheby’s achieved a very sound sale, continuing to underscore the strength of the upper echelons of the art market.

This entry was posted on Thursday, May 10th, 2012 at 4:02 pm and is filed under AO On Site, Art News, Auction Results. You can follow any responses to this entry through the RSS 2.0 feed. You can leave a response, or trackback from your own site.