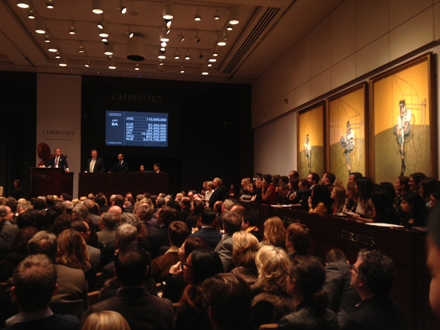 Art Observed was on site at Christie’s auction house in New York for the Post War and Contemporary art evening sale.  As the hammer struck down close to 7:30PM last night, in a packed salesroom, auctioneer Jussi Pylkkanen stated “it promises to be an exciting evening, indeed.” Nearly a half hour after the Post War and Contemporary Art Sale is generally slated to start, there was an atmosphere akin to a rock concert – a very crowded and well attended one that applauded the very start of the show. Exciting, indeed, with Christie’s achieving the highest total ever for an auction – a staggering $692 million. Of the 69 lots offered in the over two hour sale, 63 sold, which proved 91%  sold by lot, and 98% sold by value. Auctioneer Jussi Pylkkanen said in post-sale press conference that he “never expected to come to New York and sell $700 million worth of art,” and that it was a great “privilege to sell great works of art from great dates” while “seeing a curated sale received so fantastically.” 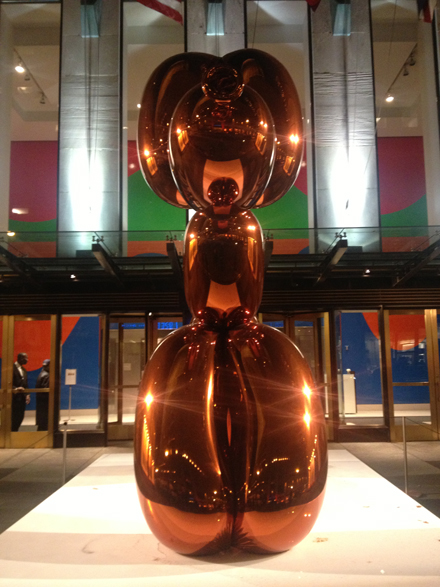 According to Chairman and Internantional Head, Brett Gorvy, Christie’s “felt the excitement building over the last week.” Gorvy proudly remarked that he believed that “we are at the beginning of something.”  That something being an integrated global market, in which top collectors are competing for the very best works that are consigned by trusting and informed sellers. He maintained that the sale was not one with big estates, but rather a very decisively curated one, where each object was hard won and actively pursued by Christie’s ‘family-like’ team of specialists. Gorvy  said that “anyone who bought tonight, bought with great knowledge.” Gorvy furthered that Christie’s was aiming to integrate and educate the public in the realm of Post War and Contemporary Art with its massive and detailed catalogues. He said that they were trying to “reach out to the public” and that “seeing selfies and Instagrams” in front of Jeff Koon’s Balloon Dog (Orange), which was installed outside of their Rockefeller Center location, was exciting to him and the house. He even admitted to helping visitors by taking their photos in front of the infamous sculpture, as he wanted to facilitate communicating the greatness of the work to the public.

The sale was astronomical in its constant and continual record setting – for artists and auction houses alike. There were 13 records broken for artists, 14 records overall counting the sale’s combined total for the evening. The undeniable highlight of the evening belonged to Francis Bacon’s triptych Three Studies of Lucian Freud, which broke the record for the most expensive work at auction ever sold at $142 million. This yellow and ashy hued set of three oil paintings was bid on by three continents, stirring an internatioanl audience. Jussi Pylkkanen began the lot’s ascension with a pensive “where should we open this?” It was met with the quiet sound of murmurs and giggles. The starting bid of $80 million found at least five paddles and hands waving within the salesroom, yet as it climbed to unforeseen heights, there were predominately 7 – 8 bidders, who could participate on that financial level both on the phone and in the room. There was a stall in the bidding at $122 million, which was upped by a phone bidder’s $1 million prompting Pylkkanen to say “of course [we’ll accept that] $1 million is a lot of money.” As the artwork made its way to $142, there were many pauses, which were met with the patient auctioneer’s declaration that it was a “historic moment.” The painting had been originally ordered as lot 32, but was rearranged last minute to be lot 8A. Gorvy attributed this to Christie’s response to the request of bidders, who didn’t want to wait to see how the outcome of the sale would affect their buying options for the rest of the works offered. Gorvy cheekily quipped “I think it seemed to work.” This rare work was purchased by Aquavella Gallery. 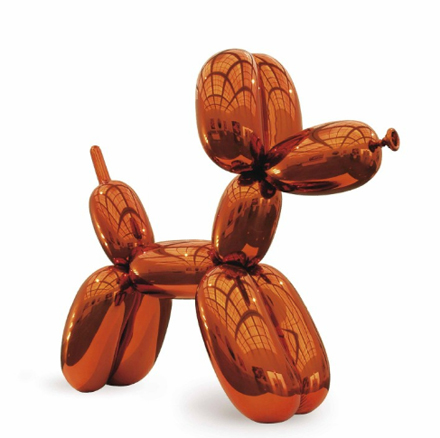 Jeff Koons’s Balloon Dog (Orange) boosted the second highest grossing lot, and broke the record for any living artist at auction, in addition to his own record at auction for $58 million, above its estimated $35 – 55 million. This work is part of an addition of five Balloon Dogs, where each is identified by its color. Auctioneer Pylkkanen commenced this sale by informing the crowd that the starting bid of $35 million should match the final price of the orange Geneva diamond sold at Christie’s earlier that day. After reaching its hammer price, the room half heartedly clapped with Pylkkanen thanking them. Koons’s previous record at auction was $33.6 million for his Tulips, which were sold at Christie’s a year ago. This sale usurped Gerhard Richter’s previous slot held for a living artist at auction. 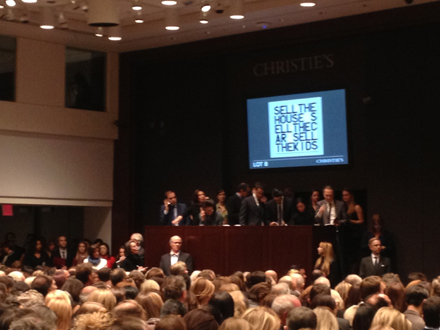 Inside Christie’s Salesroom, Image by Aubrey Roemer for Art Observed

Additional records at auction belonged to three of the remaining top lots. Namely, Willem De Kooning’s Untitled VIII, which earned $32 million against its former record of $27 million from 2006, at Christie’s, for a work that was also from 1977. It sold above its projected high of $30 million to Nancy Whyte Inc. Following was Christopher Wool’s Apocalypse Now, selling for $26 million – well above its hoped high of $20 million. The work sold to Van de Weghe Ltd., and was a major point of contention in art critic Jerry Saltz’s recent article regarding the New York auctions this season. This piece was sold in tandem with the Guggenheim’s retrospective of the American painter. 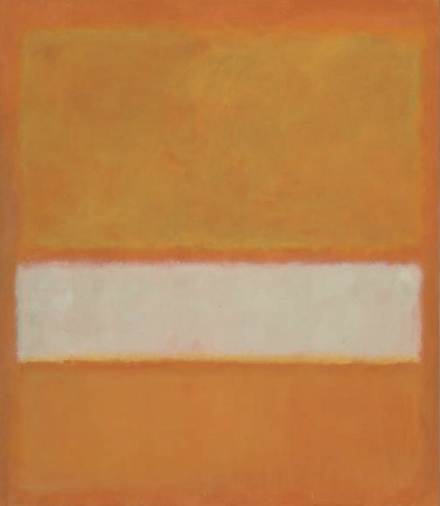 Other notable sales included Mark Rothko‘s  No 11 (Untitled), which made $46 million against its estimated $25 – 35 million. A painting similar in style to the Rothko that sold previously for $87 million at Christie’s. Also, a small Jackson Pollock achieved $32 million, and landed a place in the top lots. As did Lichtenstein’s Seductive Girl, which sold for $31 million against its anticipated $22 – 28 million. Following suit were Jean-Michel Basquiat‘s Untitled for $29 million and Gerhard Richter’s Abstraktes Bild (809 – 1) for $20.8 million. Both aforementioned items were included in the top lots of the evenings sales.

The last of the Contemporary Art Evening Sales continues tomorrow at Sotheby’s.  Art Observed will be covering the sale. Follow us on our Twitter and Instagram accounts.

This entry was posted on Wednesday, November 13th, 2013 at 9:16 am and is filed under Art News. You can follow any responses to this entry through the RSS 2.0 feed. You can leave a response, or trackback from your own site.