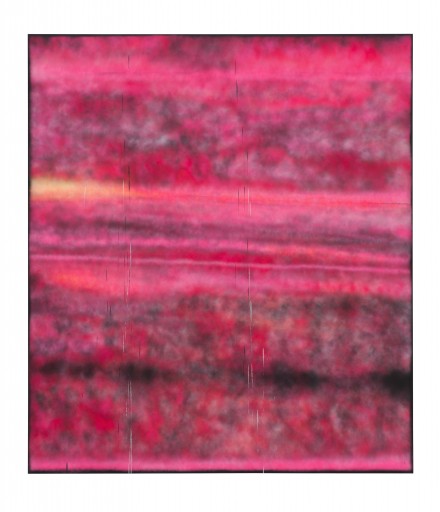 Declared ‘one of the most interesting artists to emerge in this century’ by Roberta Smith, Sterling Ruby has become one of the major fixtures among West Coast artists after leaving the Art Center College of Design in Pasadena in 2005. The L.A. based artist, who is known for his large scale ceramic or bronze sculptures and ambitious installations challenging the limits of artistic production (his first exhibition with Hauser & Wirth was on view in Chelsea this spring after the artist joined the gallery roster), is presenting VIVIDS, his spray paint works on canvas at Gagosian Hong Kong.  This exhibition is another addition to Ruby’s recent series of projects in Asia, which started with an exhibition at Taka Ishii Gallery in Tokyo, and will continue with the Gwangju and Taipei biennials, alongside an upcoming exhibition at the Ullens Center in Beijing. 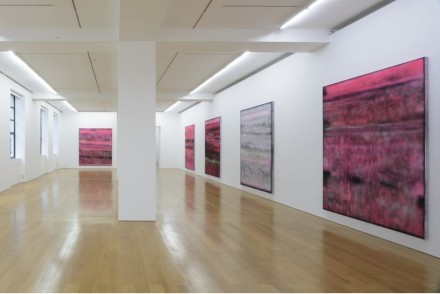 Whether in his large scale porcelain sculptures, which blurring the definitions of grit and precision, or his abstract paintings drawing on interplays of intense color, Ruby’s art has always been concerned with certain social and political flows of the time.  His Hong Kong show is no exception, with Ruby approaching the notions of urban landscape and its interaction with social dynamics in a stylistically subtle and thematically indirect method. 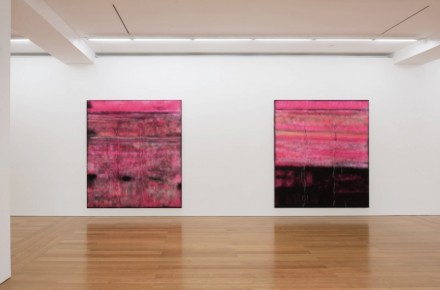 Ruby’s ability to simultaneously grasp the essence of turbulence and tranquility is embodied in these pink dominated spray paints all titled with his initials, often drawing on the artist’s experiences with the landscape and smog-tinted skies of his native Los Angeles.  Embracing the faint, flecked materiality of spray paint, the works make an interesting tie to the pollution of Los Angeles itself, small fragments of material gradually contributing to the colors and forms of the full piece.  Through this method, Ruby focuses on his hometown Los Angeles, and gazes upward to see the reality of his city. The sky, with all of its infinite possibilities, is an undeniably strong metaphor both for independence and shelter. Acknowledging the freedom endless skies perpetuate in terms of abstraction, the artist utilizes his material to achieve an individualistic narrative through a raw and spontaneous style that equally acknowledges the dense chemical outputs of Los Angeles as a whole.

Sterling Ruby: VIVIDS is on view at Gagosian Hong Kong through October 25, 2014. 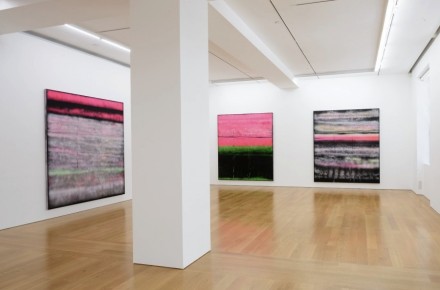 This entry was posted on Wednesday, October 22nd, 2014 at 1:53 pm and is filed under Art News. You can follow any responses to this entry through the RSS 2.0 feed. You can leave a response, or trackback from your own site.