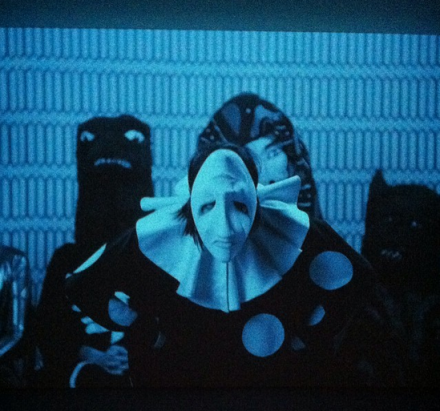 Marcel Dzama’s latest film, Une Danse des Bouffons (A Jester’s Dance) (2013), is on view now at David Zwirner’s 525 and 533 West 19th Street spaces, marking the premier showing of the film in the United States.  The exhibition, featuring a number of collaborations and multi-media projects, includes a 7-inch vinyl release of the film’s soundtrack, with haunting, largely instrumental music by members of the band Arcade Fire. 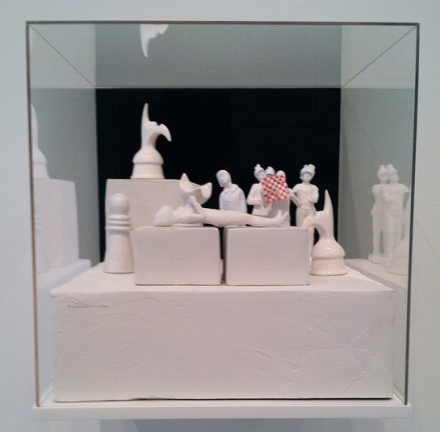 Marcel Dzama, Procession for a Pawn (2014), via David Zwirner

Shot in black and white, the 35-minute silent film draws its inspiration from the love affair between artists Marcel Duchamp and Maria Martins (played by both Kim Gordon and Hannelore Knuts), on whom Duchamp based his final major artwork, Étant donnés, and at a time when many believed he had left art completely in favor of the game of chess.  In the film, a trickster character lures Duchamp into playing chess, turning him into a chess master, then aims to destroy him at the game.  Martins, in this plot arises out of the Étant donnés sculpture and enters into the chess game in an attempt to save her lover.  Throughout, Martins faces a variety of creatures, from a four-eyed judge to a dancing golden calf, diving further and further into a realm of uncertainties before the plot circles back in on itself, forever repeating its narrative. 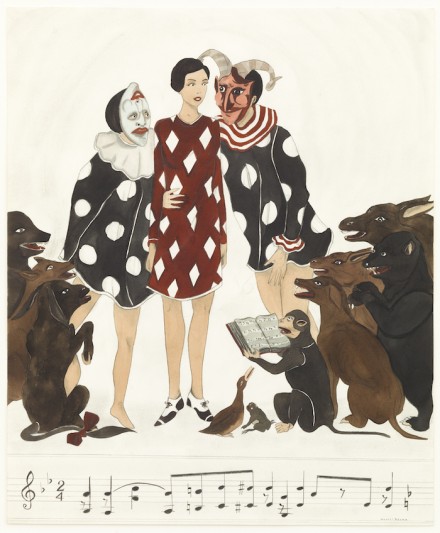 Marcel Dzama, The song that will announce her return (2014), via David Zwirner

Playing on structures of parallelism, Dzama splits the exhibition in half, screening the film on either side of the gallery space.  The two sides are divided by color, red and blue, and accompanied by works and objects playing on these schemes.  This playful construction is based on the African mythical god Edshu, who is known for his two-sided hat of red and blue. According to legend, the deity would walk through a village, and those on either side of him could not agree on what color his hat was, resulting in an argument that would escalated into violence. In some versions of the story, the conflict served as a lesson to the villagers that two contrasting viewpoints may not be mutually exclusive. In other versions, the villagers fight until they destroy each other, much to the god’s delight.  Dzama plays on these notions of duality, even subtly altering details of the film in each version (Gordon plays the role of Martins in one, while the younger Knuts plays her in another). 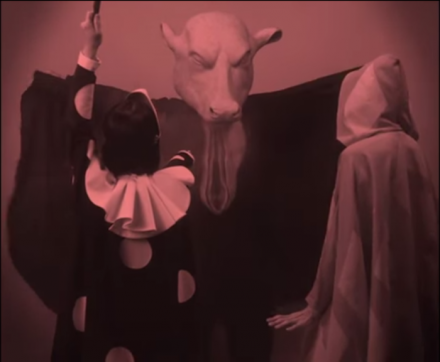 Une Danse des Bouffons (A Jester’s Dance) draws inspiration from a number of historical art pieces to give life to its characters, the most obvious of which is the dancing golden calf, reminiscent of the Minotaur, and inspired by Francis Picabia’s Adoration of the Calf.  Dzama also cites inspiration from Francisco Goya’s They’ve Already Got a Seat in costuming Martins with a chair atop her head, and from Joseph Beuys in the choice of props.  Like any good story, a sizable portion of the film rests in the telling, and the use of these recognizable themes from early 20th century art (both on-screen and in Dzama’s many printed and sculptural works accompanying the screening), the impact of Duchamp and his surrealist/dadaist counterparts forms the context for a romance enmeshed in the life and work of the artists in question. 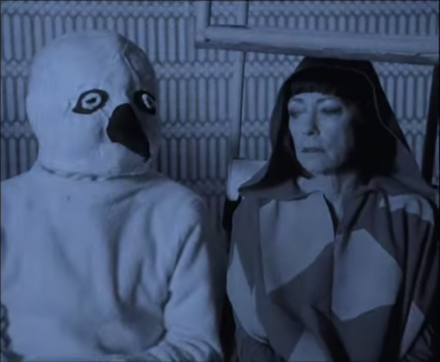 Other displays include props from the film, dioramas, sculptures, and flat works on paper. In the space connecting the two galleries, several screens simultaneously show another recent film, Death Disco Dance, which features chess piece characters from Dzama’s film A Game of Chess and ballet dancers in polka-dotted unitards performing a synchronized and improvised dance.  The music for this work was written and performed by Dzama himself on a small drum machine. 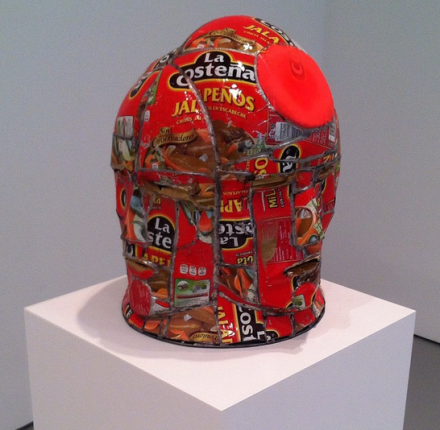 Marcel Dzama, The Four Kings of Latota (2014), via David Zwirner

Paying tribute to a variety of artists in this fictionalized love story, Dzama has created a world that is at once surreal and familiar, using his unusual film narrative to explore themes of good and evil, reality, illusion, and the trappings of false identity. 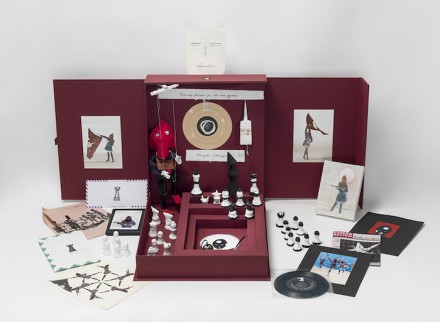 Marcel Dzama, A red box for Marcel (2013), via David Zwirner 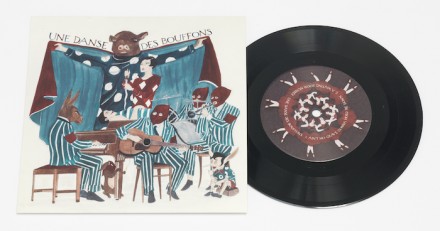 This entry was posted on Thursday, October 23rd, 2014 at 11:30 am and is filed under Art News. You can follow any responses to this entry through the RSS 2.0 feed. You can leave a response, or trackback from your own site.