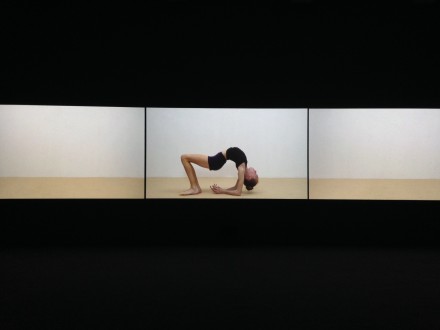 Rineke Dijkstra’s new three channel video, The Gymschool, St. Petersburg, is currently on view at Marian Goodman Gallery. Originally commissioned for Manifesta in 2014, this 15-minute video was shot at an acclaimed gymnastic school in St. Petersburg, Russia, utilizing the minimal, pale atmosphere of the rehearsal studio.

For close to three decades, Dijkstra has produced an elaborate body of work, molding photograph and video into apparatus for arduous reflection of human condition.  Her ability to deploy depth and substance in her minimal subject matter has led Dijkstra build a unique artistic fashion that is difficult to overlook.  Staring into Dijkstra’s camera, everyday members of the society, positioned amidst a variety of mundane settings from sea shores to domestic interiors, confront notions of familiarity and foreignness through their own biographical movements and aspirations, central performative elements that play a central role in Dijkstra’s documentary practice. 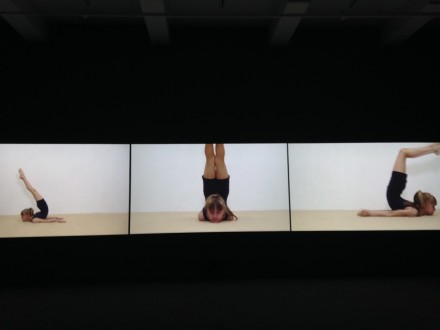 Starting her career as a commercial photographer in her native Netherlands, Dijkstra had an artistic revelation upon an attempt to photograph herself struggling to get out of a pool during her recovery from a car accident.  The sudden rawness of emotion she caught on her own face in a photograph triggered her creative vision, and encouraged her to venture into an ongoing investigation of fragility and strength that are embedded in human expression and exertion, both facially and corporally. 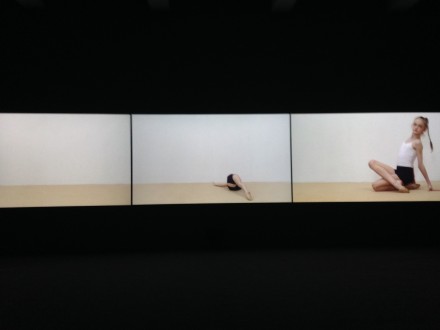 This small exhibition once again delivers Dijkstra’s competence in unveiling emotions within her real life models in their distinct habitats.  Using eleven young girls rehearsing for the Olympic competitions in rhythmic gymnastics, Dijkstra takes a passive, observant role, studying her models’ interaction with their own bodies and their environments. 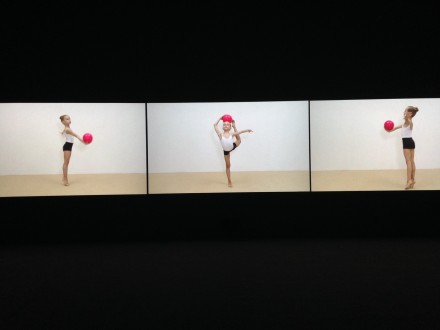 Capturing her models before and after a central life event is an important element of Dijkstra’s work.  Yet here, the artist prefers to dwell on depicting the exhaustive nature of repetitive, prepatory cycle of her subject. Rehearsals of the footage fills the piece with a subtle theatricality these students challenge their young bodies with expressly ambitious poses.  Overtly complex movements, which require extreme contortion techniques, act as a peculiar distancing method, watching bodies diverge from basic human composition and juxtapose unrealistic and often bizarre poses, while emphasizing the routine nature of these movements for her actors. 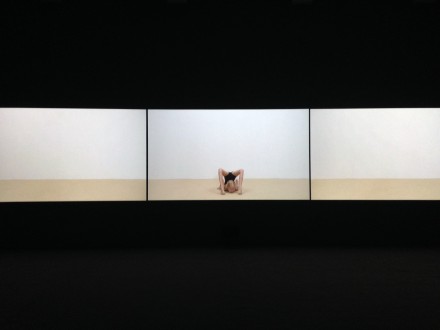 The calm and poise these girls maintain is often spoiled by a sudden error or loss of control, while a smoothly achieved number puts a proud expression on their faces.  Doubtless, Dijkstra is interested in such seconds, in which self control leaves the stage for unintended yet authentic human expression, occasionally and uninvitedly detonating throughout this 15-minute film.

Rineke Dijkstra: The Gymschool, St. Petersburg is on view at Marian Goodman Gallery through December 19, 2015. 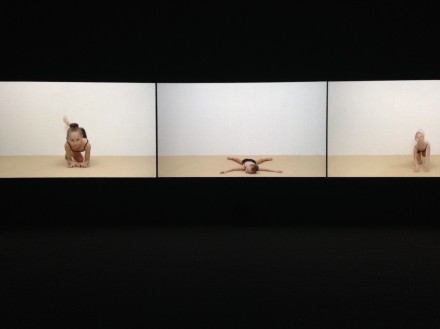 This entry was posted on Saturday, November 14th, 2015 at 12:00 am and is filed under Art News, Featured Post, Show. You can follow any responses to this entry through the RSS 2.0 feed. You can leave a response, or trackback from your own site.