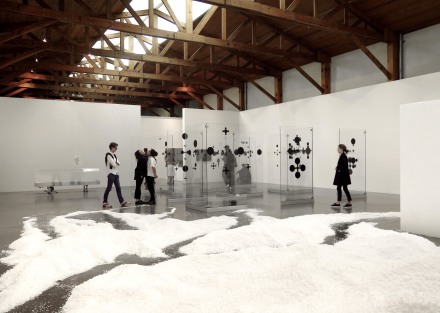 The collective exhibition “xylañynu. taller de los viernes” curated by Guillermo Santamarina, brings together recent works by five artist friends and close collaborators: Gabriel Orozco, Abraham Cruzvillegas, Damián Ortega, Gabriel Kuri and Dr. Lakra. Thirty years ago they started meeting at Gabriel Orozco’s house in Ttlalplan to create a kind of alternative art school which became their “Friday Workshop”. Hosted between 1987 and 1992 by a then 25-year-old Orozco slightly older than his peers, the workshop embodied an experimental meeting place, which allowed each of them to investigate and progressively give form to their own artistic language. The latent synergy and embedded connections between their creative processes is for the first time displayed at their Mexican Gallery Kurimanzutto. 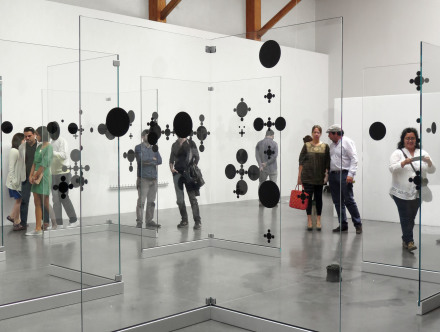 The exhibition thus features a comprehensive survey of their individual current practices. The artists share a singular approach to the everyday and the ordinary, and present us with a broad panel of objects such as a car, vinyl covers, cigarette butts, potted plants, packaging foam, bottles and cans, bathroom glass panels, shells, a conveyor belt, a mobile phone. Through their precise manipulations, these materials gain new meaning, and embody a different identity. The installation as a whole carries out a very distinct vocabulary of forms, which further reveals the mechanisms of construction / deconstruction present in each of the works. 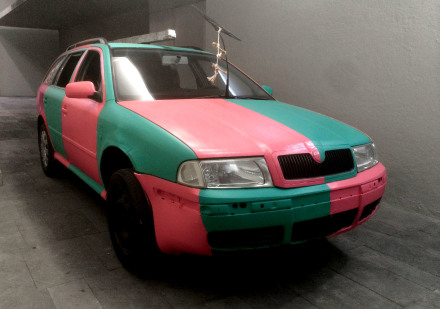 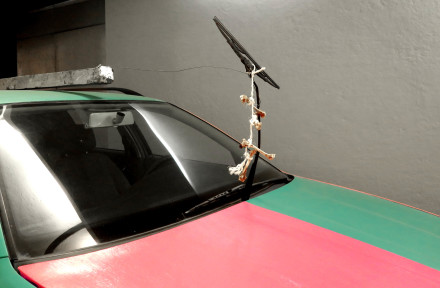 Abraham Cruzvillegas drove his bicolor car from Panama and parked it in the driveway of the gallery. The Skoda Octavia bears Cruzvillegas’s emblematic chalkboard green and pink color chart. The radio is still on, some windows are open, the artist left a child’s seat in the back, and chicken bones are casually hanging above the windshield. The driverless vehicle ‘Autoconfusión’ (2015) is indeed at rest, but still conveys the narrative of its journey, and the possibility of departure. This work also hints at the long-standing tradition of cars in Mexican contemporary art, initiated by Gabriel Orozco in 1993. 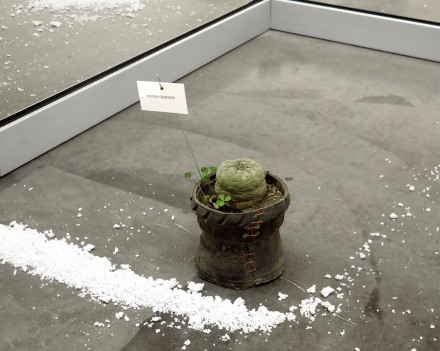 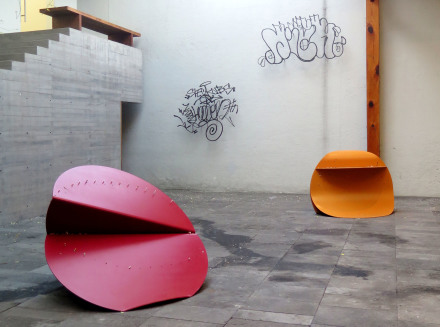 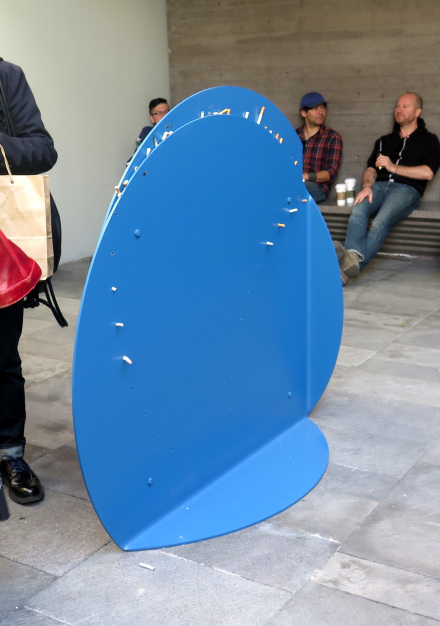 Along with the video ‘Autoconstrucción Memorial, performed by Yun Choi’ (2015) displayed on a mobile phone, Cruzvillegas also presents a series of small cactuses ‘El Taller de los Viernes’ (2016) scattered around the gallery, in corners and between works. They each bear a warning sign “No Soy Cenicero” (I am not an ashtray), as a humorous response to Gabriel Kuri’s outdoor sculptures ‘this, please’ (2010). Playing with fundamentals of minimalism, Kuri’s blue, red, orange and grey volumes are however complete once cigarette butts fill the purposefully designed holes. The beholder is thus entrusted to interact in a primary physical way, allowing one to reconsider the position of art in public spaces and how open or restricted it should be. Further reflecting on displacing the discourse on accessibility and even maybe vandalism, Damián Ortega has for his part hung on the wall two of his metal shaped ‘Physical Graffitis’ (2015), actually modeled on existing graffiti tags. Giving materiality and permanence to an ephemeral phenomenon resonates among most of the works on view. 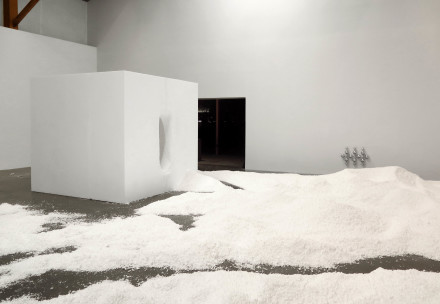 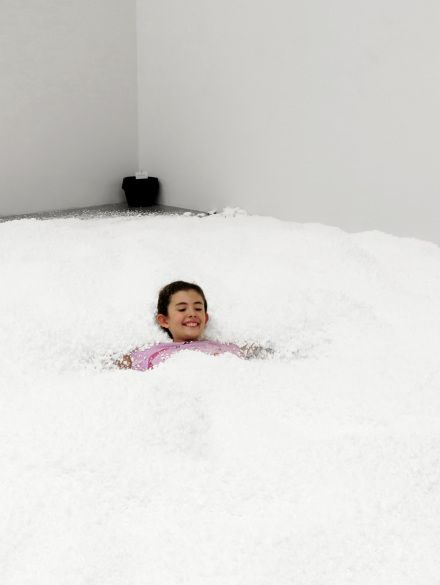 A bath of foam, Damián Ortega, Paisaje 2 (2016), via Sophie Kitching for Art Observed

This interplay between the organic and the industrial, positive and negative spaces, growth and disappearance, is further embodied by the coupling of the two larger works: Gabriel Orozco‘s ‘Blind Signs’ (2013) and Damián Ortega’s ‘Paisaje 2’ (2016). Ortega assembled and carved his gigantic foam piece on site. The large white cube presents a concave circular cavity, and the extracted foam flakes have poured outside of the volume and have invaded the gallery floor, transforming it into a minimal yet soothing landscape. The cube and its expansive residual material interact particularly gracefully with the glass labyrinth ‘Blind Signs’, further suggesting the confines of shower panels. Black decals discs of various sizes have been stuck on the glass, following specific points of the human body and rules of symmetry. In this work, Orozco expands his circular motifs in the third dimension. The viewer’s displacements through the screens set the circles in motion: they overlap or disappear, reflected in all directions, as they enter and vanish one’s field of vision. 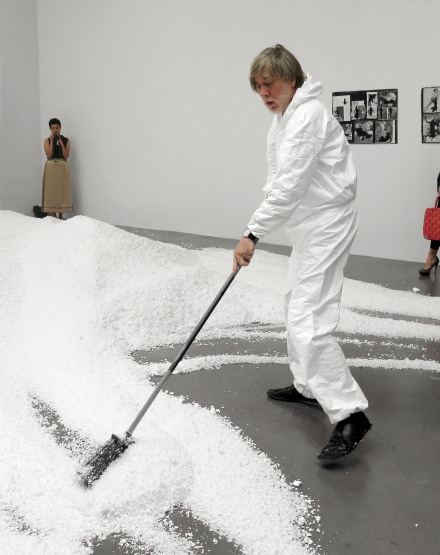 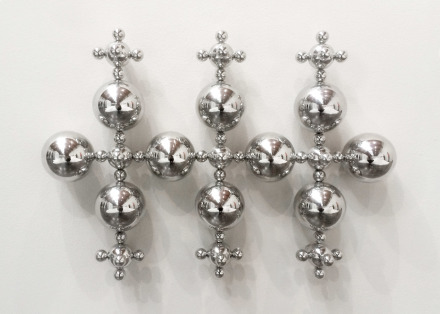 By their juxtaposition, the two installations become complementary, interconnected, and interdependent. For the opening, curator Guillermo Santamarina indeed performed in Ortega’s ‘Paisaje 2’ in a white industrial overall, sweeping the foam around Orozco’s piece. Together, the works form a dynamic system, in which their tangible dualities (full / void, light / shade, open / hidden, structural / amorphous) create a unified whole, which succeeds at transcending everyday reality and transposing it into the realms of art. 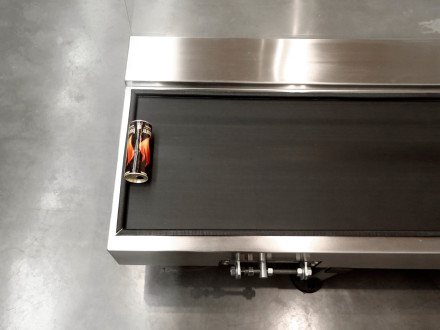 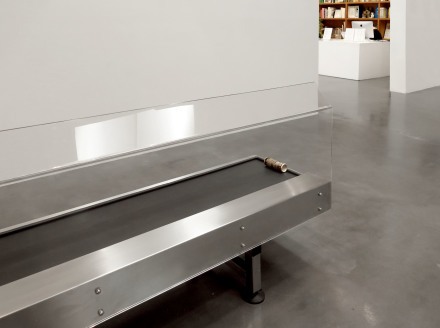 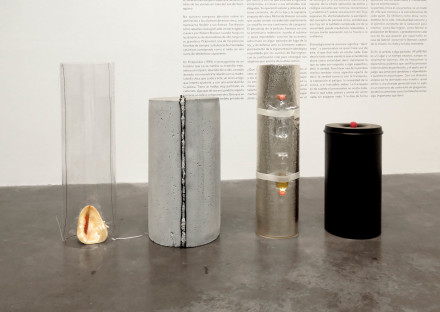 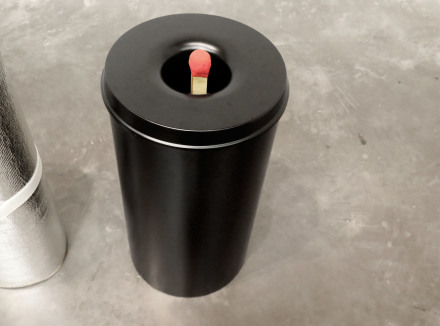 The works of Kuri and Dr. Lakra on the other hand seem to unite in their approach of urban mythology and pop culture. ‘Maqueta para desfile’ (2010) (Model for a Victory Parade) stages an energy-drink can rolling and tumbling at the end of a conveyor belt. By restraining this single item into one absurd action, Gabriel Kuri confronts our actual grasp of consumer goods. Furthermore, the manufacturing precision of each component raises questions on the tangibility of such apparatus. It is indeed hard to distinguish what objects are ready-made and which ones the artist fabricates. This tension can be found as well in ‘Bilateral growth’ (2013), where Kuri plays with unconventional materials and techniques to present us with what seems to be four reconfigured types of pedestals. Hybrid encounters such as an oversized matchstick in a metal dustbin, a seashell and zip ties, open witty dialogs between content and context. This hermetic, ironic, cerebral, yet fascinating aesthetic lies at the threshold of the local and the global, balanced in a perpetual alternation. 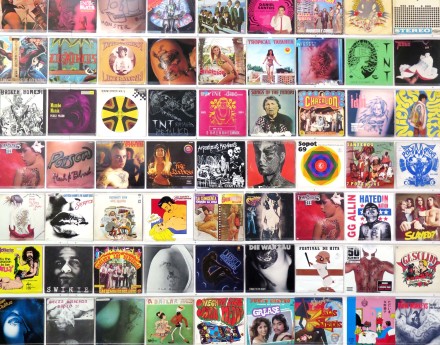 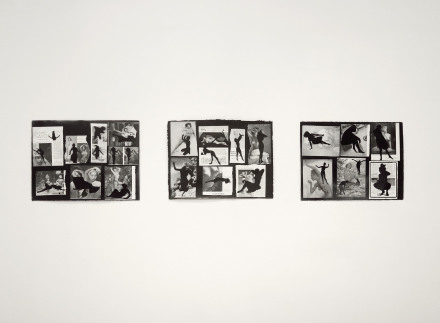 In contrast, Dr. Lakra proposes a series of Untitled two-dimensional works, which relate to present-day mythology through the means of accumulation and decontextualisation. The large scale ‘Sin Título’ (2015) at the entrance showcases 231 vinyl covers, all hinting from close or afar to the tattoo industry, a core field in Lakra’s practice, who is also known as a major tattoo artist in Oaxaca. The triptych of collages ‘Sin Título’ (2015) is based on vintage newspaper clippings depicting female figures. The artist outlined and cut out lascivious feminine silhouettes superimposed as their negative double. These drawings resemble shadows; arranged by series on a larger format, the collages become a motif, a visual sign iterated and abstracted. Through their repetition, the album cover and the female body are somewhat liberated from the popular culture they belong to, and generate an unfamiliar totality, referring to traditions of illustration and murals. Mixed narrations overlay, connecting the whole to the singular. 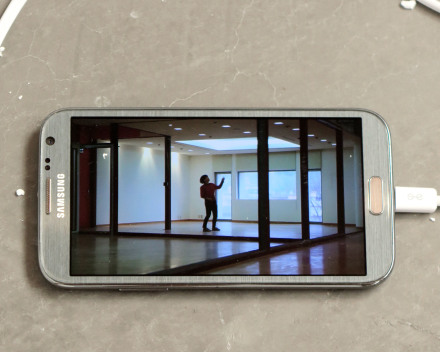 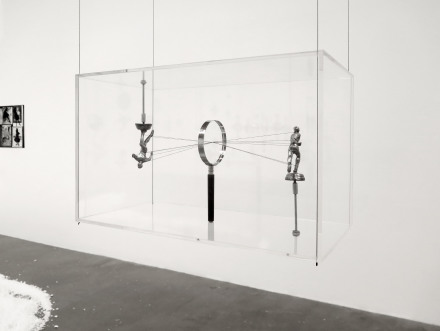 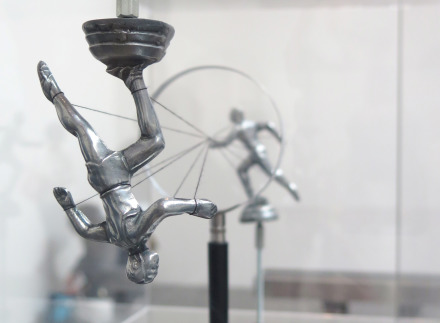 Games of associations and acts of observations tie the works together. The title “Xylañynu” for instance derived from a simple game imagined by Gabriel Orozco, which consisted in composing a word out of letters chosen randomly by each of the participants. During one of their meetings, the artists, the curator and gallerists indeed followed this formal exercise and each successively chose a letter sharing it only to the person sitting next to them. The sequence created the word “Xylañynu”. This unconventional start sums up the qualities of the show as a whole: open, experimental, subtle, effortless, sometimes abrupt or antagonist, often humorous, yet rigorous and complex. 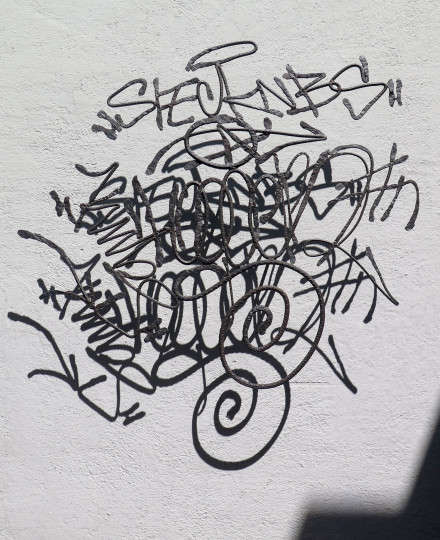 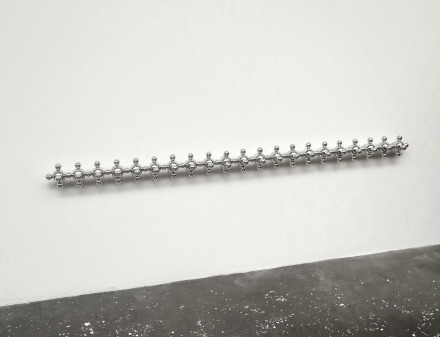 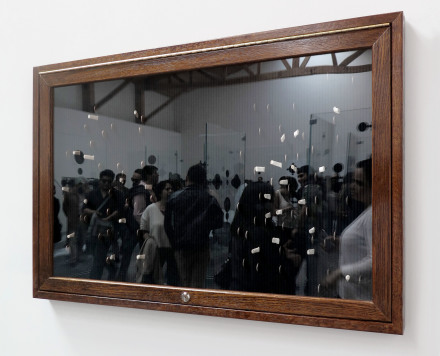 Borrowing Guillermo Santamarina’s words from his curatorial essay A Game of Parrhesias and Theft, from Monday to Monday, the artists lie somewhere between “Pickpockets and Philosophers”. And indeed, “the unbreakable courage of experimentation with materials, supports and work models or of connection/situation is still valid and de rigueur in all five.” Their complicity however remains intact and palpable. The exhibition is a masterpiece as a whole, challenging and rewarding for the sight and mind equally.

This entry was posted on Saturday, March 19th, 2016 at 4:17 pm and is filed under AO On Site, Art News, Featured Post. You can follow any responses to this entry through the RSS 2.0 feed. You can leave a response, or trackback from your own site.