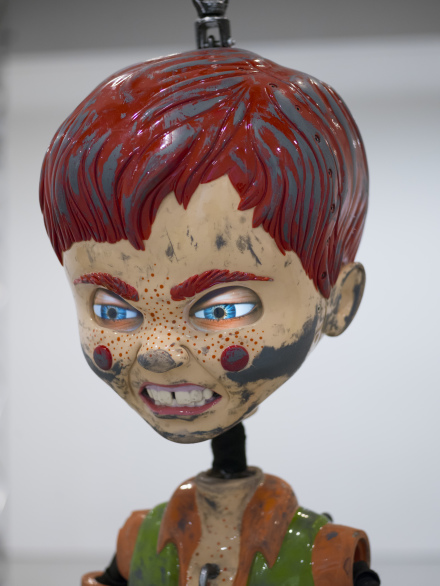 On view at David Zwirner’s 525 West 19th street location is Jordan Wolfson’s most recent investigation of the sculptural genre in the age of new technology.  Following 2014’s exceptionally received and widely seen (Female Figure), the voluptuous and arresting female animatronic that Wolfson created at a professional Hollywood film studio, his current exhibition introduces Colored sculpture: a larger-than-life, red-haired teenage boy suspended from a mechanic structure that controls his movements and often violently degrades his body. 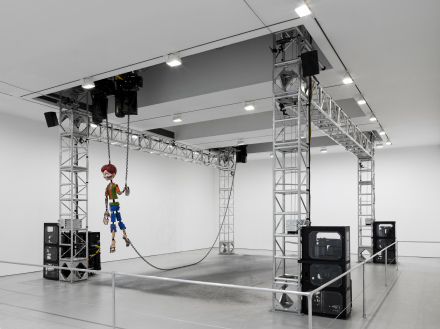 The burden of heavy duty chains, clinging to his arms and legs, contrasts the immediate associations with the giddy fiction of Pinocchio, compounded by an intense grimace and hollow, video-screen eye sockets. The naiveté and spontaneity found in traditional puppetry metamorphoses here to a pure depiction of the abject, helmed by Wolfson’s meticulous employment of technological possibilities. The boy’s once-polished attire, turned grimy from the repeated process of dragging him across the floor chronicles his Sisyphus-like destiny, in which he is trapped in a vicious cycle, forced to repeat the same pathway and disturbing, jerking motions of the chains that hold him. 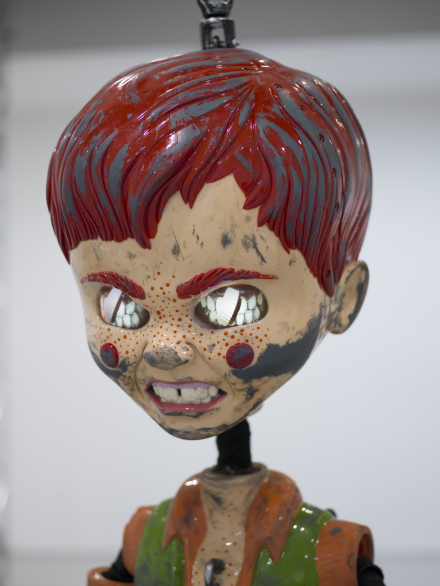 Next to their ability to lock their gaze on random viewers, the boy’s eyes screen a series of grotesque video loops, including those the artist created or pulled from the media. This loop of never-ending visual content seems particularly poignant considering the pace of society’s media consumption, and the bemoaning of increasingly short attention spans.  Eerily gazing out at his surrounding through eyes that switch between beaming blue eyes and flux of haphazard footage, the boy encapsulates a bizarre version of the present generation, engaged with technology to the point of excess, all while remaining subject to the artist’s sadistic mechanical structure. 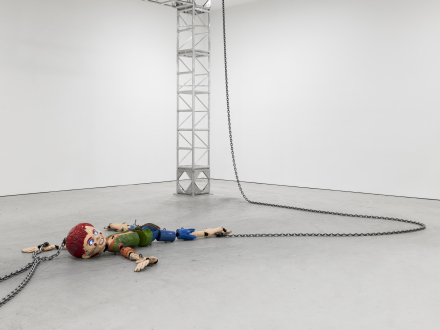 With each move of his chains slowly dragging him upwards, or briskly dropping him onto the floor, the piece’s rattling shackles and dragging limbs create a makeshift symphony—testing the audience’s sense of endurance and voyeuristic impulse simultaneously.  Wolfson, however, hesitates to ask any sympathy for this boy, turning him into a modern-day jester, outwardly mocking his own ludicrous situation, as well as that of his audience. The unexpected chiming of the 60’s romantic hit “When a Man Loves a Woman” only adds onto the ridicule Wolfson compiles on his figure, as if both framing the work under the guise of a torrid love affair while mocking the convention through its bizarre fusion of tangible and auditory formats. The work, assembled as a highly complex technological invention, leaves ample space for an absurdity that is both disguised and emphasized under the puppet’s presence and its degraded form.

Jordan Wolfson’s work is on view at David Zwirner through June 25, 2016. 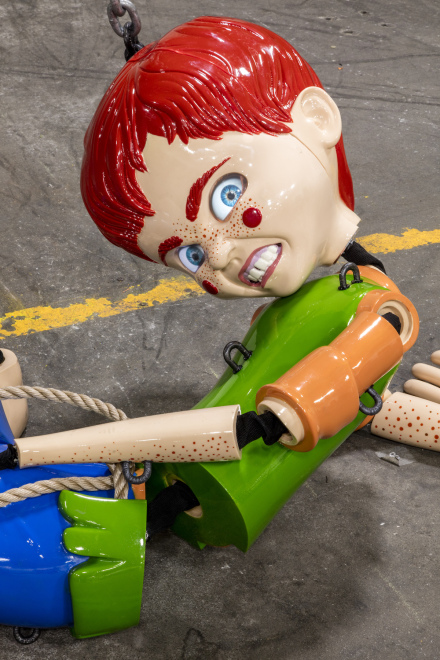 This entry was posted on Saturday, June 11th, 2016 at 1:34 am and is filed under Art News, Featured Post, Show. You can follow any responses to this entry through the RSS 2.0 feed. You can leave a response, or trackback from your own site.