London – Nairy Baghramian: “Scruff of the Neck” at Marian Goodman Through July 29th, 2016 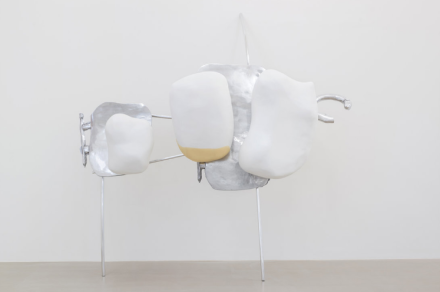 Nairy Baghramian, Scruff of the Neck (LR 30/31/32), All images via Marian Goodman Gallery

Now on view, Marian Goodman Gallery in London is presenting Scruff of the Neck, a series of site-responsive sculptures by artist Nairy Baghramian.   This is Baghramian’s first major solo show in London since The Walker’s Day Off at the Serpentine Gallery in 2010, and continues the Berlin-based Iranian artist’s practice in creating formally inventive sculptures that operate in both physiological and mechanical dimensions, articulating and reflecting the artist’s interest in exploring the space of the body in a non-habitual way. 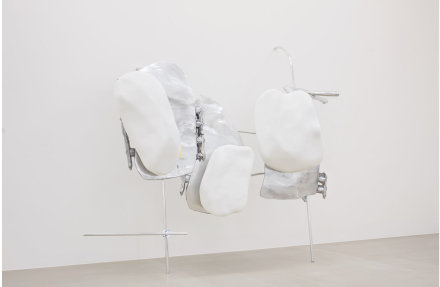 The departure point for Baghramian’s current exhibition was to imagine a space entered into from the back of the head, placing explicit emphasis on this underrepresented physical space to explore alternative views of the human body and its relationship to itself.  Indeed, as the title of the exhibition suggests, the sculptures of Scruff of the Neck can be seen to suggest alternatives to the social and cultural implications of the façade, done through the emphasis on vulnerable folds of skin, and the suggestion of parental control or training that this area holds (usually by gripping or collaring a body and dragging or pulling it).  Simply, the space is approached as though from behind the back of the head, as opposed to being absorbed through the orifices of the face. 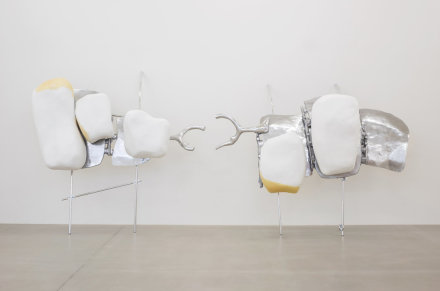 The works in this exhibition imply and explore space between their physical structures, framing the gallery as a surrounded cavity.  The organic, marble-dusted forms lean against the walls and hover just below the ceiling. In both their form and titles, they communicate the material of dentistry.  Bridges, braces, and various polished metal implements can be seen supporting the milky white forms, which almost resemble melting teeth.  As the Press Release for the exhibition states, these forms “do not create space as much as point to it, suggesting that the gallery itself is a kind of speaking apparatus, or a set of jaws.” 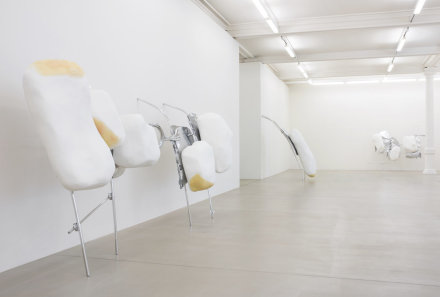 Accordingly, Baghramian approaches the back of the head and neck, but ultimately enters the mouth, taking earlier hints at discipline, and pushing them outwards through the teeth and gums.  In some ways, this violent act of socialization and control is presented as a development of language, the act of discipline shaping speech acts for years to come.  In turn, it begs the question: what is there to bite down on?  The gallery and the viewer within it are positioned as the substance of this show, while the works themselves reflect the frame of interiority and the tender spaces found within or behind a façade, they are the subject, where language and order correspond to create imposing landscapes where the viewer is, in some sense, a target.

Baghramian’s exhibition speaks to her keen ability to blend the mechanical with the organic, the amorphous and abstract with the supremely concrete.  Her work is on view through July 29th. 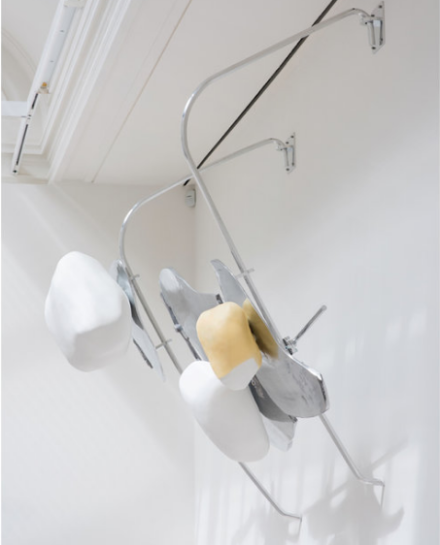 This entry was posted on Monday, July 25th, 2016 at 12:00 pm and is filed under Art News, Featured Post, Show. You can follow any responses to this entry through the RSS 2.0 feed. You can leave a response, or trackback from your own site.