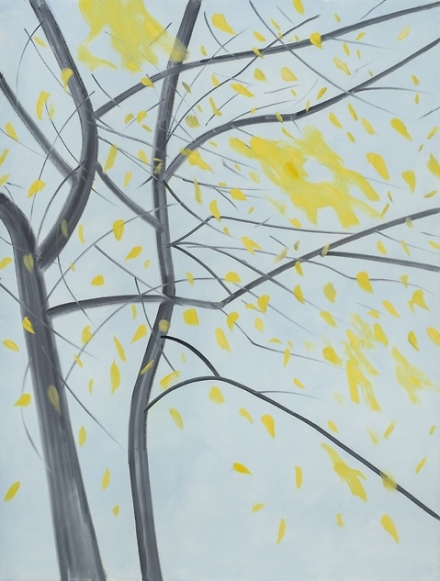 Continuing his recent surge of output, Alex Katz has brought a new series of landscapes to Thaddaeus Ropac’s Paris Marais exhibition space.  Bringing his attention yet again to the landscapes of Maine, the artist’s work here presents his calm, subdued style in a fitting conversation with the untouched curves and lines of Northern New England. 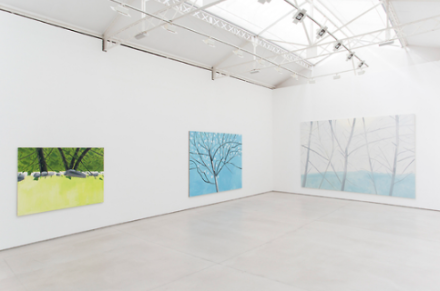 Katz’s relationship with the state of Maine has been a long and fruitful one.  He first traveled there early in his career for a residency at Skowhegan in 1949, and used its landscapes and washes of greens and golds to inform his already established techniques.  His early works in the state explored the same sense of minimal portraiture, mixed in with slight inflections of the world around his subjects more towards the natural.  Serene lakes are dotted with small crests of white, as his smiling, quiet figures navigate over their surfaces or emerge from below, smiling.  It’s a fitting continuation of his documentation and presentation of his circle of friends and companions, a deeper look at the New York crowd, but this time on summer holiday. 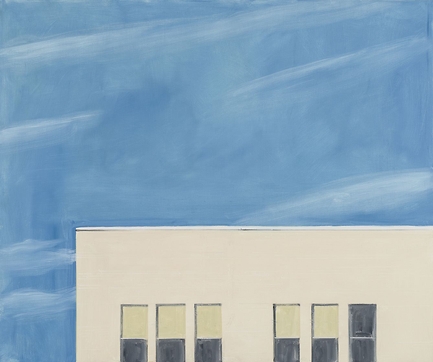 Katz has since made a second home in Maine, with a home in the small town of Lincolnville, and an ever-growing body of work that places the state’s rolling hills and curving coastlines at the core of his studies.  At Ropac Marais, his ongoing studies take the form of momentary glances, empty landscapes presented as visual fragments that rarely seek to present themselves as a totality of the scene Katz is painting in.  In Fall, the artist captures a series of lithe, snaking forms of a lone tree, dotting them with deliberate strokes of green that seem to hover between a position on the branches and a line of flight down to the ground. 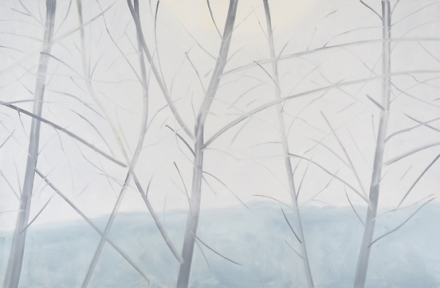 Yet the artist still takes time to present humankind within the frame of this world, albeit viewed from the same perspective as his natural elements.  In North 1, he picks out a corner of a building, juxtaposing its geometric rigidity against the hazy blue of the sky behind it.  The shifting emphasis on foreground and background creates a surrealistically-tinged final canvas, one where the viewer themselves is pulled into a world where hours can pass staring up at the clouds. 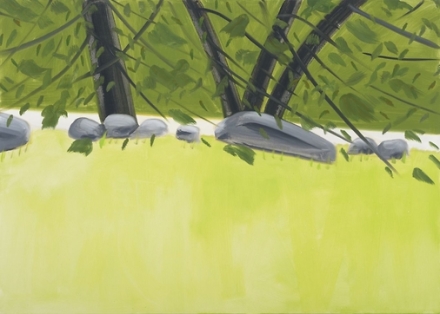 There’s always been a subtle play on reality in Katz’s work, suspending figures in monochrome backgrounds or laying them out in flurries of counteracting positions and poses.  Yet it is in nature itself that the artist seems to find his most worthy subject of study.  Turning his methodical, patient approach to mark-making towards a subject that often moves with the same gradual, quiet determination, Katz is able to realize a sense of natural time in his landscapes, transitory moments that feel all the more potent for their indeterminate states. 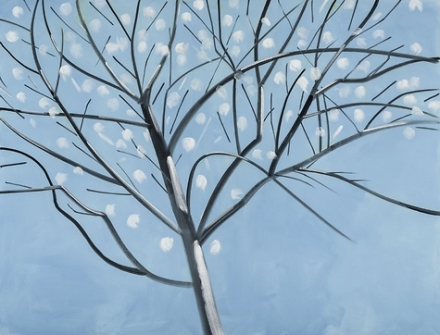 This entry was posted on Thursday, July 28th, 2016 at 5:32 pm and is filed under Art News, Featured Post, Show. You can follow any responses to this entry through the RSS 2.0 feed. You can leave a response, or trackback from your own site.