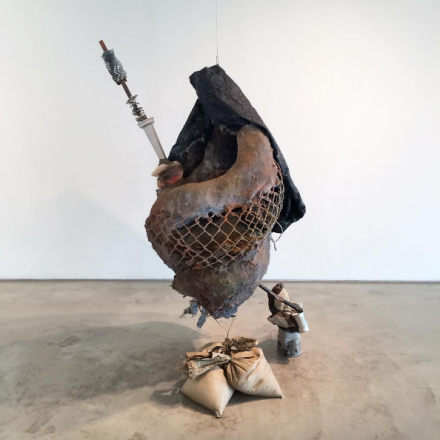 The current group show at Moran Bondaroff is a swirling, surreal exercise in sculptural gesture, compiling a trio of uniquely-motivated artists whose works play on the intersection of materials, contexts, and conceptions of the human body.  The show, which brings together new works by artists Agathe Snow and Marco Barrera in conjunction with a series of historical works by the Irvine, CA-based artist George Herms, emphasizes connections in the capability for everyday objects to escape their quotidian bounds by way of addition and juxtaposition. 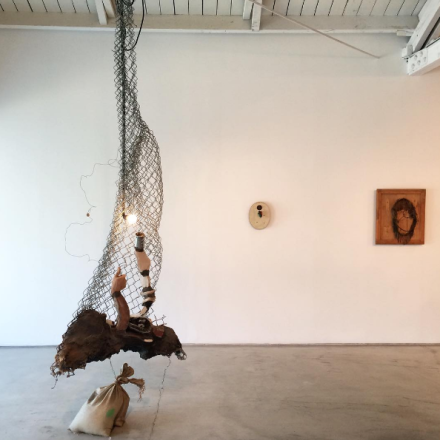 Herms, who continues to work in California, sits at the core of this exhibition, with works that twist a wide range of materials and objects into otherworldly arrangements and relationships, often forming subtle linkages between parts, or strangely evocative relationships between the sculpture and the viewer.  Memories and histories glimmer on the surfaces of each work, serving as a repository of fragments joined together by the artist’s own modes of assemblage.  In others, these same elements are applied towards a more comically-focused final effect.  One work, an immense ladder, topped by what appears to be the top of a chafing dish, makes subtle plays on physical logic, pushing varied readings on the nature of Herms’s interaction with memory, and how his process is embedded within it.  In another, Harness and Cage, the artist pushes a sense of personification onto a frayed piece of fabric, lending it a certain pathos by its apparent imprisonment. 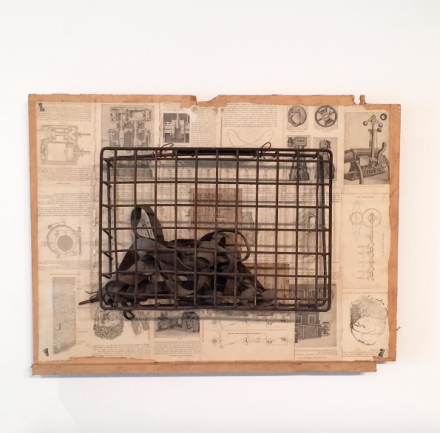 This dialogue between objects and associations is offered additional folds through the lens of Snow and Barrera’s selections for the exhibition.  Herms’s particular approach, exuding a quiet sense of whimsical relationships, is extended into new realms by each artists’ response, often building narrative or thematic arcs into the work itself.  In one piece by Barrera, an arrangement of netting, tin cans and sandbags presents itself as a distended figure, turning away from the viewer as if in flight.  In other works, his pieces twist similar senses of the body as a broken, meandering series of parts and pieces applied towards more elaborate relations with the scenes depicted.  His forms are alien in their ability to distance themselves from the images used, to incorporate such familiar elements into their fabric while remaining disengaged from the viewer. 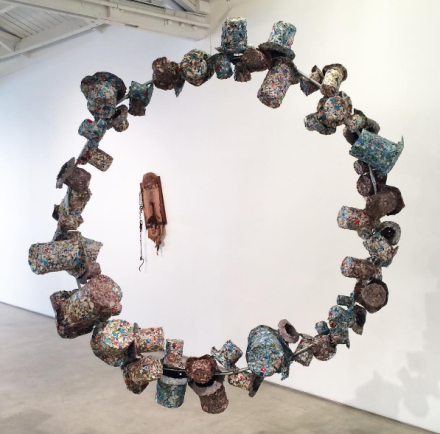 Agathe Snow, Where have all the good men gone (2016), via Art Observed

By contrast, Agathe Snow offers a single series of sculptures spread across the show, circles of human legs and other body parts created with shredded paper and resin.  Pushing on Herms’s sense of the body, and his material’s capacity to express it in abstract, Snow’s work approaches the same subject from a more direct path, and uses the work’s materiality to work in reverse, directing the viewer back away from easily read narratives or associations with the body proper.  Despite a plain familiarity with the objects in question, their repetition and compositional approach moves the final product away from a quick association with the body.  Each work’s function in turn as a frame of sorts, bringing attention to any object resting within its circumference. 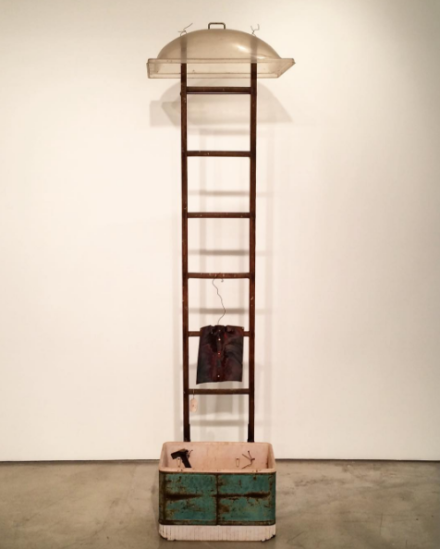 This sense of resistance and refusal is tangible throughout the show, as each artist’s ability to shape space and narrative within their works is used in turn to distance the viewer or turn them back away from an initially formed understanding of the works on view.  As a result, the show takes on the nature of a twisting, convoluted path through memories and fictions, where any initial reading may prove misinterpreted, inviting the viewer towards a deep investigation into their own interpretations.

Eternal is on view through August 27th.

This entry was posted on Thursday, August 25th, 2016 at 12:28 pm and is filed under Art News, Featured Post, Show. You can follow any responses to this entry through the RSS 2.0 feed. You can leave a response, or trackback from your own site.