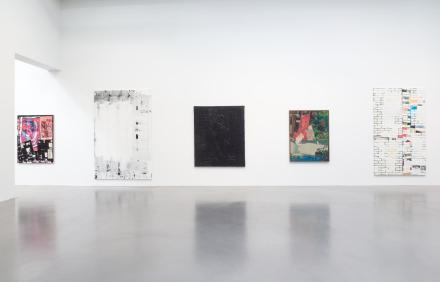 Fine Young Cannibals, a summer group show currently up at Petzel Gallery’s 18th street location, is currently undertaking the perpetually ambitious task of examining the current state of painting.  Bringing together work from sixteen different artists, the show poses the question of whether the type of contemporary work sometimes categorized as “Zombie formalism,” borrowing a term first coined by critic Walter Robinson, is purely market driven, or whether the work should be given more consideration.  The pieces on view, which range from challenging formal workouts to coy, momentary operations on canvas, offer an intriguing look at current threads in the painterly discourse, adopting a fairly even-handed approach to the artists on view, and their respective interests. 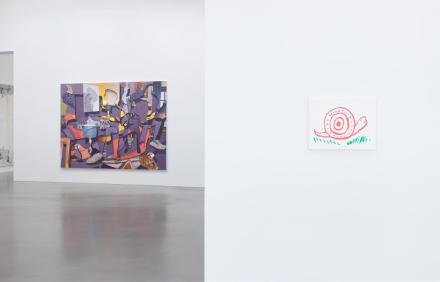 Collectively the paintings presented in this show make a solid argument that there is more to this vague category of practice, or, at the very least, does well to prove that they should not be so carelessly swept aside as a conniving market trend.  The show begins with a painting by artist Michael Krebber, considered by some to be an antecedent of Zombie formalism.  Krebber was a former assistant to the prolific Martin Kippenberger, also represented here in a large, monochromatic black rubber painting.  Krebber’s piece is demure by comparison, a slight, cartoonish rendering of a snail on a stark-white background, directly lifting the image from an amateur painting by Kate Middleton, Duchess of Cambridge, and playing on cultural and imagistic threads in an economical series of brush strokes. 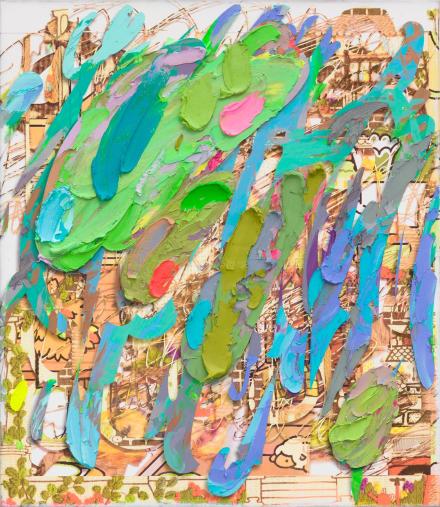 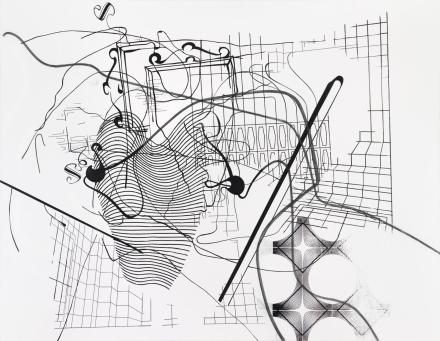 Much of the work here is characteristically abstract and process based, machine-enhanced, or made to look as if it had been printed direct from a screen.  For example, Laura Owens’ bright, impasto strokes, covering up screen-printed images of the popular cat game app, Neko Atsume, while Albert Oehlen’s computer-painting, hand-made in charcoal and acrylic to look as if it had been rendered on a primitive computer, or Jacqueline Humphries’ repeated happy faces, which combine to create a larger image recalling Roy Lichtenstein’s Ben-day dots. 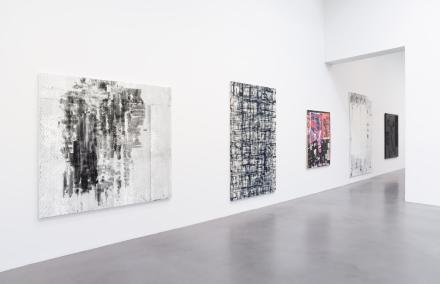 The show calls attention to each artist’s self-referential operations.  Painting, like most art forms, always seems to be in dialogue with itself, either through a single artist’s body of work, historical reference points or amongst a collective group of contemporaries.  Zombie formalism, by comparison, has been accused of having a self-conscious bent.  The painters here cannibalize images, often within their own repertoire, to make another use for them.  Christopher Wool’s paintings, for instance, comes from a process of blowing up a previous drawing, while Wade Guyton’s image of a previous installation was made using an inkjet printer on linen.  In each, the works themselves underscore this ongoing conversation, not merely with the artist’s awareness of their discourse, but equally with the forms and themes that they have repeatedly revisited over the course of their career.  While the show’s subject remains notably broad, the selections make a notable dent in the perception of these works, and their related aesthetic interests.

This entry was posted on Friday, August 5th, 2016 at 12:00 pm and is filed under Art News, Featured Post, Show. You can follow any responses to this entry through the RSS 2.0 feed. You can leave a response, or trackback from your own site.