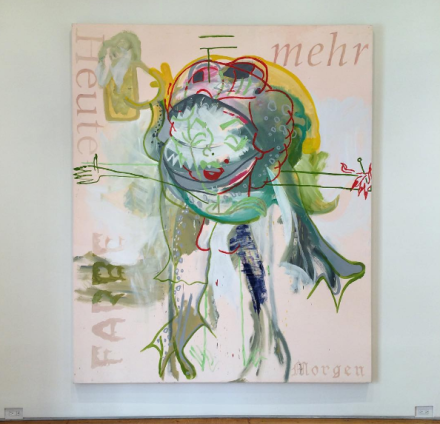 Skarstedt Gallery’s 79th Street town house takes a cunning turn on the rule of threes this month, as the space shows a minimal, yet nuanced exhibition focusing on German painting.  Culling together three works each from a trio of post-war innovators (Albert Oehlen, Georg Baselitz and Martin Kippenberger), the gallery allows a subtly arranged, yet distinctly felt series of interconnected themes and formal investigations over the course of the exhibition. 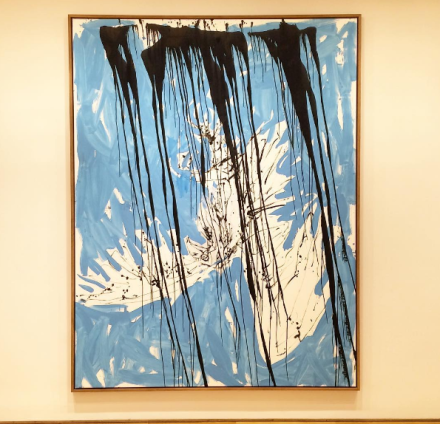 Greeting the viewer on the ground floor is a selection of Baselitz works from the past decade of the artist’s practice.  Utilizing a stark approach to the human figure, and an even more restrained approach to ground and negative space, Baselitz’s works are marked by huge strokes of paint, and bodies twisted into brusquely rendered positions, often giving off a perverse or viscerally charged aura.  Combined with their vivid yet minimal use of color, the pieces often explode off the canvas, forcing the viewer’s focus towards only a few elements. 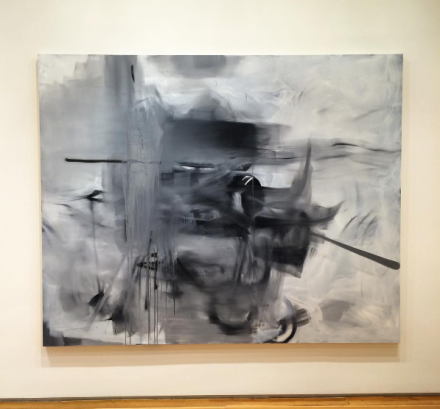 A Grey Painting by Albert Oehlen, via Art Observed

Upstairs, similar threads are pursued to vastly different ends in each room of the gallery.  In one room, a trio of Kippenberger pieces from his Fred the Frog series greet the viewer, swollen with text and fragmented body parts that give the work a madcap energy that often threatens the canvas with a sense of linguistic collapse.  Slight details collide on the surface of the work, from a rough depiction of a beer stein to countless overlaid body parts, faces, and animal features, the sum total being a dizzying visual overload that is countered quite well by Oehlen’s works across the hall.  In these, momentary flirtations with the human figure, from quick insertions of a cartoonish eye to a vague outline of a human visage, provide the backdrop for swirling exercises in black, white and grey, allowing the language of abstraction to reach towards a more subdued mode of expression.  The operation in such a subdued palette recalls Baselitz’s work downstairs, and serves to crystallize many of the shared interests in language, the body, and the painterly gesture running throughout the show. 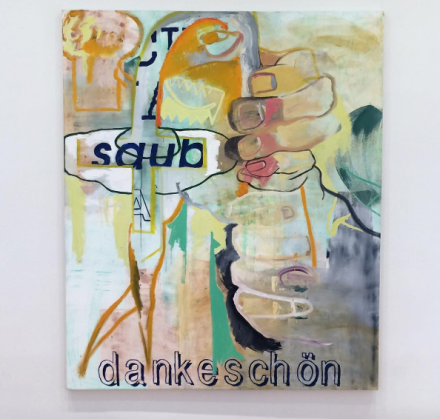 The three artists’ sense of the body, and their resulting strategies of depiction, finds a readily apparent commonality here, as each artist takes on their own strategy towards an abortive approach to figuration. Throughout each of the artist’s approaches, the body seems to appear both as an allusion to figurative practice at the same time that it signals its dissolution in the face of contemporary practice.  Accordingly, the works on view are particularly interested in a sense of how the body functions in the modern painting, and push a perception of the body in negotiation with the language of the abstract.  This unbalanced, almost madcap approach appears in a variety of forms throughout the show, from Kippenberger’s explosive energy, to the inversions of perspective that Baselitz employs, through to Oehlen’s momentary flirtations with its shapes and curves.  Throughout, the body takes on a role as formal container, as the symbol of a human presence rather than the craft of the human itself.  Much in the same way that Kippenberger’s Fred serves as an allegorical stand-in for the artist, the works on view allow the body into the work as a concept alone, forcing it to state its case against the loosely rendered gestures of the 20th Century.

The exhibition is on view through October 29th. 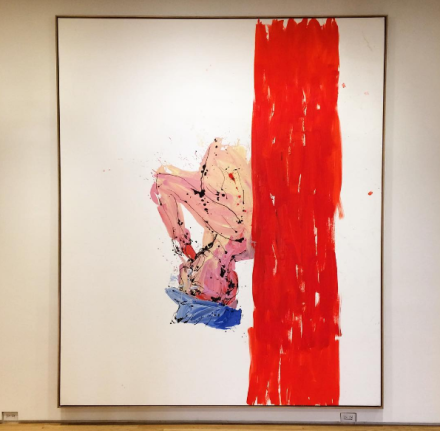 This entry was posted on Tuesday, September 20th, 2016 at 12:41 pm and is filed under AO On Site, Art News, Featured Post. You can follow any responses to this entry through the RSS 2.0 feed. You can leave a response, or trackback from your own site.