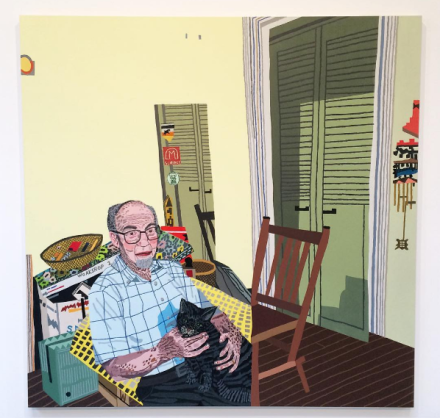 Taking over both rooms at Anton Kern’s Chelsea exhibition space, LA painter Jonas Wood has brought a well-rounded and entertaining series of new paintings, which chart the artist’s continually playful and inventive approach to figuration.  Mixing together abstract signifiers with a cool, even-handed approach to the world around him, Wood’s pieces here are an exceptional entry in the discourse of modern painting. 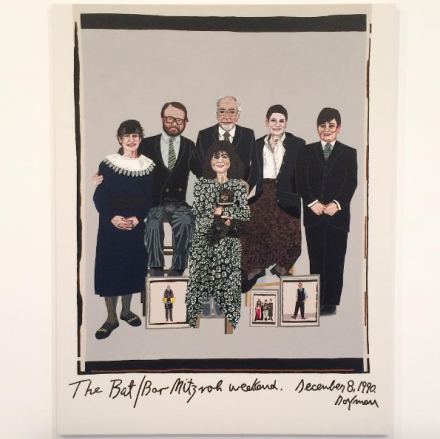 Wood’s execution feels effortless in more ways than one, rendering his subjects in a naturalistic state against often simplified or unadorned backdrops that seem to offer both a relaxing context for his sitters and an ease of visual access for the viewers in front of each canvas.  Rosy in My Room with His Cat, for instance, uses the artist’s own studio space as his location, yet clears the space itself of any sort of shading or use of detail.  The vast expanses of soft beige offer an intriguing counterpoint to the artists’ subject, his face a mixture of wrinkles, spots and blush that gives the work a subtle energy, despite the relaxed air of the work.  In another, Robin and Ptolemy, Wood’s choice of positions lends the piece an easy-going surrealism, as the cat at the center of the piece obscures the child holding it, while simultaneously appearing to float just over the child’s body.  Elsewhere, Spiritual Warrior captures fellow LA painter Mark Grotjahn in the midst of one of his own pieces.  The replicated Butterfly piece in the back of the work, with Grotjahn in the foreground, appears as an homage of the highest order, as if Wood was acknowledging the other’s skill with a brush through his inability to re-create the canvas himself. 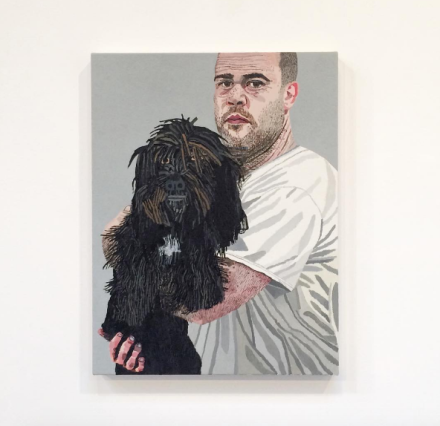 Wood seems to enjoy this sort of conscious subversion of the logic of the canvas, the use of the screen and the panel as a mode of deconstruction and playful investigation of the painted space as a carrier of boundless quantities of information, style or symbolism.  His stylistic flairs from piece to piece see him mining the surface as a source of sudden compositional frictions or ruptures in the work’s attempt at the depiction of reality, and turning that energy into the center of the work’s appeal.  Of particular note are a pair of works drawing from printed media.  In Dwayne Schintzius, the painter works from a vintage basketball card, rendering the mullet-clad player in a disjointed style alongside the graphics and iconography of his card.  The result is a piece that seems to play on both Wood’s memory of the player himself, and the visual nostalgia for the media trappings around him, the production of his image bound up in the player’s own persona.  Similarly, The Bat/Bar Mitzvah Weekend plays on the photograph as a source of visual logic, incorporating smaller panels and photos as a play on the image as a single subject or an agglomeration of sources and memories. 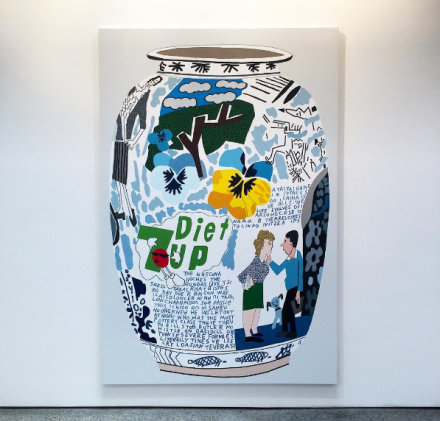 Yet Wood seems equally willing to abandon an approach to the canvas if the mood strikes him, and his sudden twists in style often make for his most impressive pieces.  Of particular note is Diet 7Up Frimkess Pot, a piece festooned with pop imagery, cartoons, and fragments of art historical modes that ultimately sees Wood at his most unrestrained, and his most entertaining.

Throughout, Wood’s work seems particularly prescient of its place in the media landscape of the 21st Century, and uses the formats and media forms that accompany his subjects to marvelous effect.  These are as much paintings as representations, of the mode of visual understanding or appreciation of the subject, as they are paintings in and of themselves, and, combined with Wood’s unique stylistic approach, makes for a striking portrait of contemporary America. 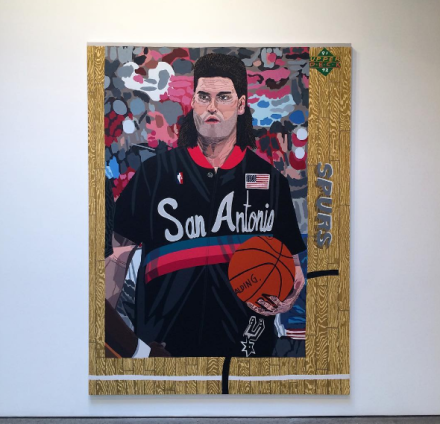 This entry was posted on Monday, September 19th, 2016 at 12:41 pm and is filed under Art News, Featured Post, Show. You can follow any responses to this entry through the RSS 2.0 feed. You can leave a response, or trackback from your own site.