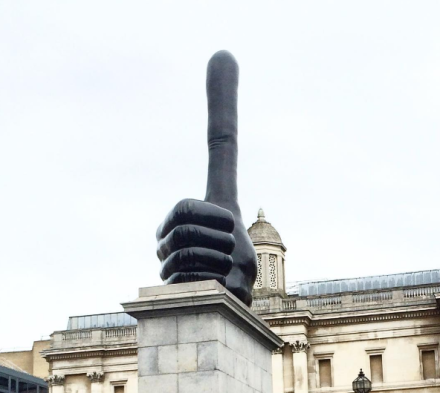 Towering over London’s Trafalgar Square, David Shrigley’s Really Good has made its appearance atop one of the most coveted spaces for public art in the city of London, bringing with it the artist’s signature brand of irreverent and multivalent humor that leaves any number of interpretive avenues open for the everyday viewer.  Several years in the making, the work, an immense thumbs-up with a comically long thumb jutting up from the base of the sculpture, comes at a time when London’s position of global prominence seems in need of some healthy optimism, a note that Shrigley’s sculpture offers in ample (albeit strangely amplified) doses. 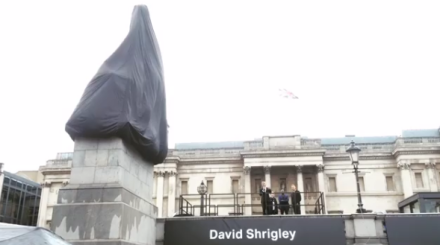 Considering the ominous notes recently sounded by Britain’s decision to leave the EU, one could forgive Shrigley for a certain degree of cultural foresight.  With London’s cosmopolitan position at the center of the art world challenged by the increasingly difficult access outsiders will have in gaining a long-term stay in the country, and many worried about the health of the city’s market position as something of a central point of convergence for many of the new international art markets, Shrigley’s work offers a certain degree of heavy-handed reassurance.  Referring to the work as a “self-fulfilling prophecy,” the work seems to echo a relentless positivity about the city’s political and economic future, yet equally parody this same sense of comfort and positivity.  Even as mayor Sadiq Khan painted the work as a reassurance that “London is still open,” the work’s inversion of its subject matter seems to highlight this political rhetoric as just that, a smiling face painted on the British nation’s turn away from the EU’s global project.

Shrigley has been considerable even-keeled about the work, referring to it as an equivocal symbol in his signature deadpan delivery.  “It is such an ambiguous thing which you can quite easily project your own meaning on to, it could endorse something I didn’t want to endorse,” the artist told the Guardian.  “My line is that it means whatever you want it to mean, but it doesn’t mean ‘that’.” 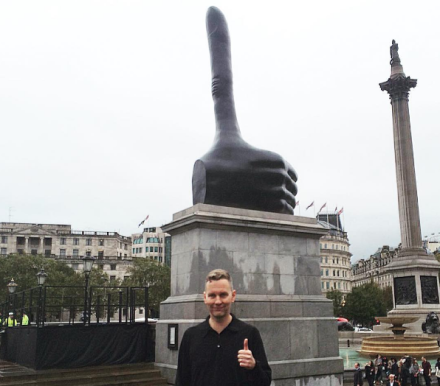 David Shrigley with his work, via Art Observed

This sense of awareness on his work’s position in post-Brexit London underscores the impressive ability Shrigley has to toe the line between the morbid and triumphant in his work, a capability that allows him to place such a subtly critical work on view in one of the city’s most prominent positions, and poke fun at those willing to inscribe their own political and rhetorical aims on the surface of the piece.  Even in the midst of the grand ceremony welcoming the work, one could not help but note the air of inflated hope many were willing to give the work, and equally notice how Shrigley’s sculpture managed to jam one particularly pointy thumb back in snarky refutation.

Shrigley’s sculpture is now on view in Trafalgar Square.

This entry was posted on Wednesday, October 5th, 2016 at 11:43 pm and is filed under Art News, Featured Post, Show. You can follow any responses to this entry through the RSS 2.0 feed. You can leave a response, or trackback from your own site.