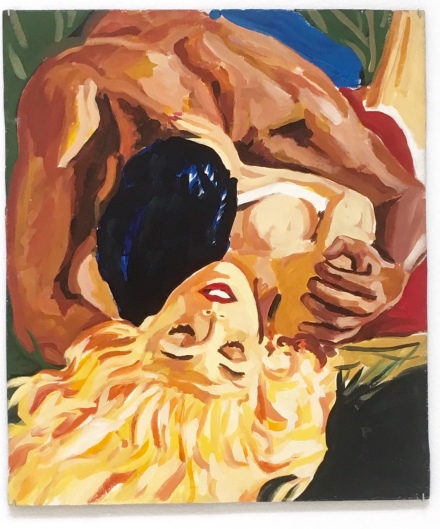 Walter Robinson, The Eager Ones (1979), via Art Observed

Filling the open spaces of Jeffrey Deitch’s reopened space at 18 Wooster, Walter Robinson’s Paintings and Other Indulgences demonstrates the wide scope of the artist’s interest in consumerist desire.  A traveling retrospective first launched at the University Galleries of Illinois State University, Paintings and Other Indulgences features a range of Robinson’s work spanning from 1979 to 2014, each of which address a wide span of pop culture imagery, imagined in the artist’s distinctive hand, ranging from greeting card kittens to Vicks VapoRub. 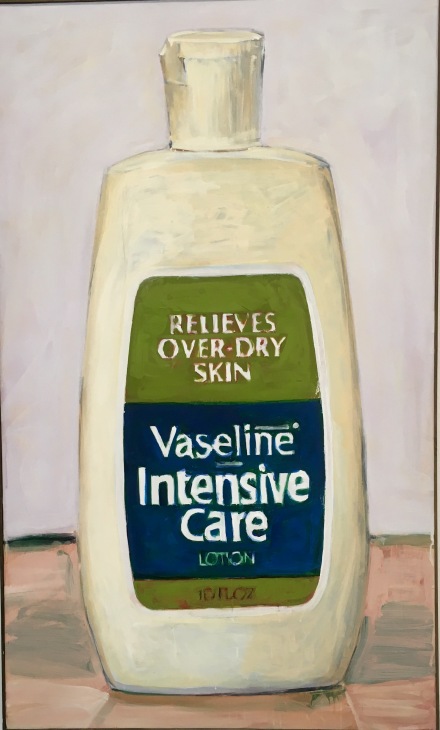 Robinson’s work elevates the kitsch by giving it a frame, yet also highlights the hedonism of contemporary culture.  His process, immortalizing the vulgar and unspoken fragments of American society, evident in particular with his passionate re-creations of pulp novels, renders alluring works as occupied with their power of attraction as they are with their subject matter.  Vibrant and aggressively romantic, the images of these works are saturated with color and posturing desire, a layered approach that speaks in part to his work as both an artist and critic.  After co-founding the magazine Art-Rite in the 70s, Robinson went on to be an editor of Art in America, and a founder of ArtNet.  A well-established writer as regards the New York art scene, Robinson’s editorial eye is evident in the self-awareness of his works.

Robinson’s use of images from popular culture explores the central themes of postmodern art. His reproductions of symbols such as the hamburger reflect only the emptiness of consumerist America, revealing a signifier that is, in many ways, constructed.  The subconscious desires that his work involves lack true substance, and instead reflect the base human wants that sit at the core of advertising iconography.  Robinson’s take on pop art allows the viewer to locate himself within the art, but through a detached, somewhat dehumanized subject, never spilling over into overt brand-centrism or easily read consumer imagery.

While drawing on some of the darker themes of postmodern art, Robinson’s work displays a playful attitude toward lowbrow aesthetics.  The retrospective features several of his spin paintings, which predate those of Damien Hirst by roughly 10 years.  Similar to the rest of the pieces in their bright color and kitschy quality, Robinson’s spin art offers another angle into the purpose of his work.  These examples of abstract painting reveal the artist’s lighthearted approach, which he describes, overall, as “an accident.” Paintings and Other Indulgences displays this same line of humor and context that Robinson rides throughout, invoking pulp, while equally satirizing and elevating the oddities of our consumer society. 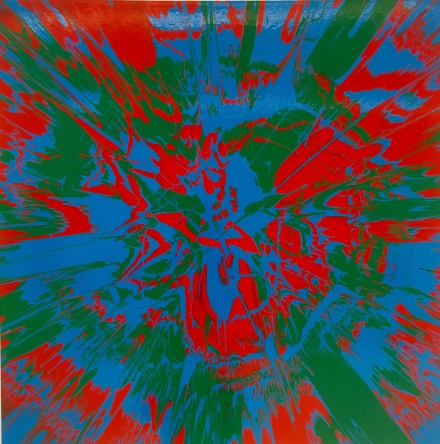 This entry was posted on Saturday, October 15th, 2016 at 12:00 pm and is filed under Art News, Featured Post, Show. You can follow any responses to this entry through the RSS 2.0 feed. You can leave a response, or trackback from your own site.