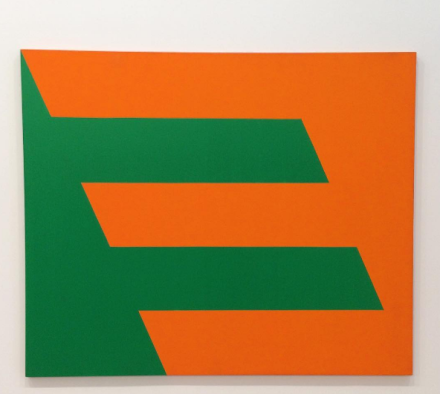 Taking over the top floor of the Whitney this fall is Lines of Sight, an exhibition delving into the first thirty years of Cuban-born artist Carmen Herrera’s unique investigations into the color field, minimalist abstraction, and the practice of painting.  On view through 2017, it provides a fitting context for the artist’s ongoing body of work, which now reaches into its seventh decade. 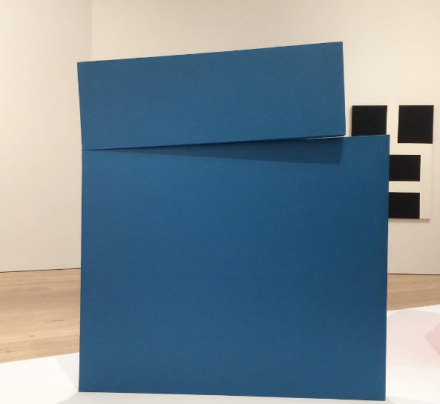 The exhibition is impressively economical for an artist whose expansive body of work moves through an almost endless series of variations and explorations into the construction of the canvas and the space around it.  Spread across the top floor of the museum, the exhibition is broken off into a selection of series from Herrera’s early practice, exploring various movements and formal explorations branching off from the common purposes and interests of her work. 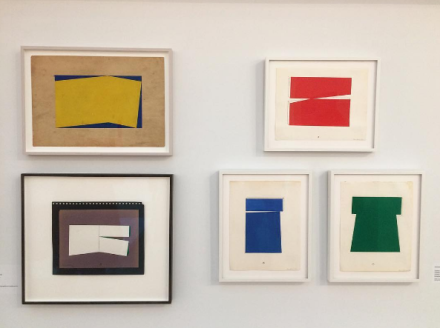 In one room, a series of round shaped canvases explore a progression of increasingly tight, honed abstraction, moving from jittery lines and fragmented contrasts of color and weight towards more elegantly arranged, minimalist approaches to the same form almost twenty years later.  Focusing the exhibition primarily around these evolutions in her perception and elaboration on a set geometric vocabulary, the show allows a nuanced perspective of Herrera’s work, both in its own development, and the various threads present in the refinement of her language. 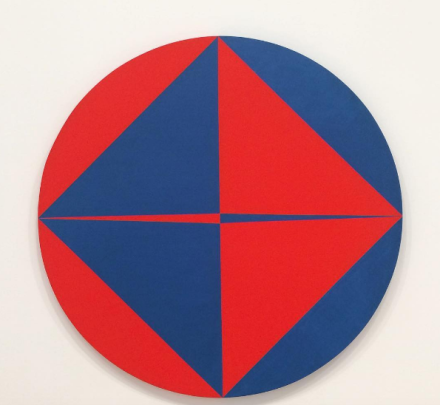 This can be seen explicitly in nine works from the artist’s Blanco y Verde series, stark white canvases that feature only momentary, albeit carefully measured inflections of green paint.  Building towards points of convergence, or subverting initial vectors of movement with the use of great expanses of white, Herrera’s pieces here delve deeply into an interest not merely in the gestural nature of painting, but in the expression of movement and stillness through a tightly reduced approach.  Momentum is a core focus here, as the lines and fields of color she creates move from a single point outwards, occasionally breaking off to another single point, or completely disappearing off the edge of the canvas.  The works explore a single act of movement, approaching a point or plane with the occasional flicker of auxiliary operation that keeps the work distinctly focused on the contrast of the most basic metrics of her chosen medium: color, shape,and space. 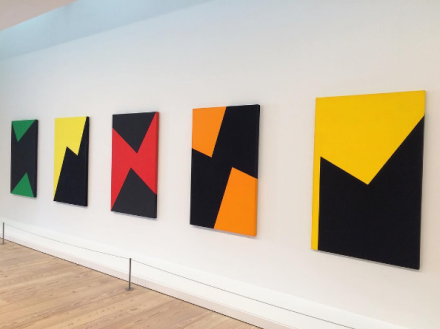 Yet the exhibition equally offers an expansion outwards from these early forms, and the selections from Herrera’s work during the 70’s begin to see these operations ordered into broader systems, contrasts of color and form that work through their relation to other canvases.  Expanding beyond the act of composition in its most essential forms, Herrera’s later work in the show begins to ask questions of time and space outside a single work, allowing a site for reflection not only on the direction of her chosen pieces, but perhaps on her career more broadly.  Opening her work into this broader sense of dialogue with the world around her, the exhibition’s point conclusion is a particularly perceptive one, if not one that offers any number of points for further exploration and thought.

This entry was posted on Saturday, November 19th, 2016 at 1:24 pm and is filed under Art News, Featured Post, Show. You can follow any responses to this entry through the RSS 2.0 feed. You can leave a response, or trackback from your own site.