New York – Kai Althoff: “and then leave me to the common swifts (und dann überlasst mich den Mauerseglern)” at MoMA Through January 22nd, 2017 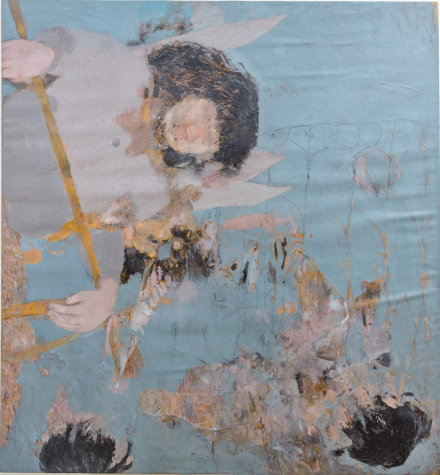 Situated atop the Museum of Modern Art, Kai Althoff’s current survey exhibition, and then leave me to the common swifts (und dann überlasst mich den Mauerseglern), first presents itself as an elaborate visual pun, turning the sixth floor of the museum into a veritable attic space for the artist’s body of watercolors, drawings and sculpture, each shown alongside other objects in an approach to the work that opens new, and often disturbing, narratives in the progression and aesthetic explorations in the artist’s career. 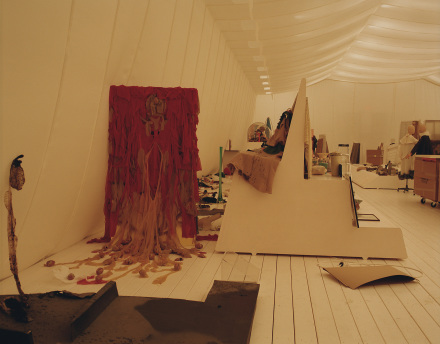 The artist’s approach to drawing and painting pulls from a distinctly Central European school of practice, drawing on a range of historical reference points to create tautly-psychological compositions.  Yet his smooth hand and careful attention to the weight of his lines and stroke of his brush leave the pieces with a certain sense of allure, one that draws the viewer in even as the tense atmosphere of the painting leaves one with a sense of an energy left unaddressed.  This sense of the spiritual remainder crosses over into the space itself, where clusters of material serve as an extension of the artist’s two dimensional practice.

The show is nothing if not confounding in its arrangement, stacking Althoff’s strangely compelling, languid figurations across series of shelves, laying them out across the floor, or tucking them into corners, almost as if to force the viewer not only into an engagement with the subject matter itself, but the sheer physicality of viewing.  The viewers body takes on a striking conversational aura with the works themselves, echoing or emphasizing the twisting arms and torsos of the artist’s hand.  But Althoff’s selections in the exhibition push well beyond mere environment design or conceptual twist on the image itself.  His inclusion of momentary scenes and sculptural interventions welcome an appreciation of the space as a whole, a flowing series of narratives that seem to converge on certain images or sites within the gallery, a point that no doubt relies on the viewer’s subjectivity and adventurousness in turn.

His use of space is cluttered, for sure, with hunks of clay or pools of ominous, dried liquid coating objects, while elsewhere, narrow spaces filled with unnamed packages and staring, dead-eyed mannequins create a sense of claustrophobia and surveillance.  The result is a space where the repetition of forms, images and scenes ultimately create a sense of something unspoken and violent, a sense of sustained and abstracted violence that hangs in the air yet always seems just out of reach.  What appears to be a blood-soaked gynecologists table, for instance, negotiates with a bizarre set of drawings on pizza boxes nearby, depicting pop stars and celebrities in a disturbing fusion of images.  Nearby, a strange blue conical sculpture offers more peculiar twists. 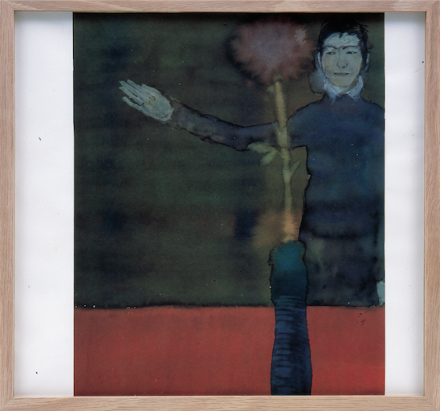 Presented in this environment.  Althoff’s pieces operate in tandem with these scenes, removing any sort of grounding information in terms of dates, context or historical progression, and leaving only their proximity to various objects, photographs and sounds.  The result is a space that seems to constantly address itself to the viewer as greater than the sum of its parts, where the artist’s medium-specific work serves as a generative mode for the space itself, one where the depth and weight of Althoff’s investigations can be felt in full.

The exhibition is on view through January 22nd. 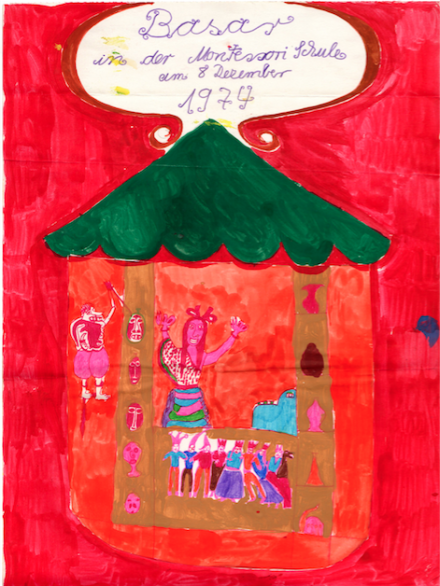 Kai Althoff, Untitled (Poster for a School Bazaar) (1974), Courtesy the Collection of the artist © Kai Althoff

Read more:
Kai Althoff: and then leave me to the common swifts [MoMA]

This entry was posted on Tuesday, December 27th, 2016 at 12:15 pm and is filed under Art News, Featured Post, Show. You can follow any responses to this entry through the RSS 2.0 feed. You can leave a response, or trackback from your own site.