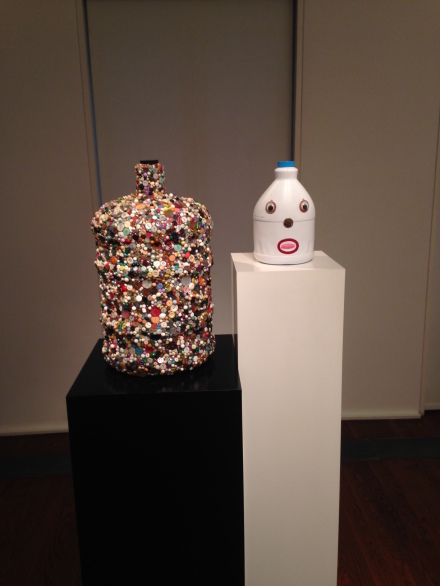 Mike Kelley, Balanced by Mass and Personification (2001), all photos via Osman Can Yerebakan for Art Observed

One of the most influential American artists of the past 30 years, Mike Kelley‘s considerable body of work runs a long thread of intricately connected and often curiously diverse modes of working and creating, often creating internal exchanges and conversations that further the artist’s exploration of memory, time, and personal histories.  The late artist’s Memory Ware series has long stood as one of the less explored and understood series from his catalog, even though Kelley continued to make these works until close to his untimely passing in 2012.  Consisting of hundreds of different objects, the series manifests some of Kelley’s most fundamental thematic concerns through a reliance on bizarre fusions of kitsch, often drawing collective and personal memories, American folk art, consumerist tendencies, and pop culture into close proximity. 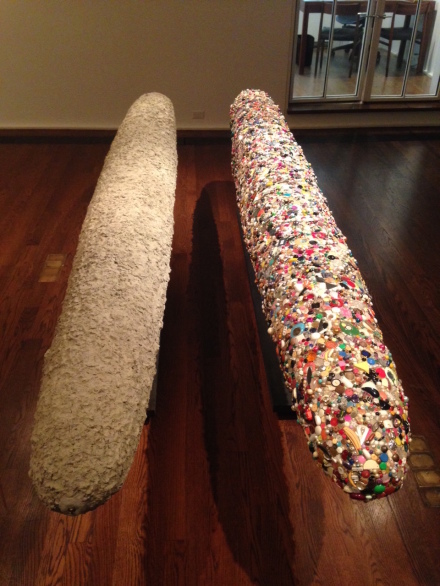 The current New York exhibition of this series, on view at Hauser & Wirth’s Upper East Side location, features a series of twelve works from the Memory Ware series, including some of Kelley’s most striking and emblematic examples.  Drawing on notable visual counterpoints between the neighborhood’s tony atmosphere, Kelley’s materials in these works range from thrift store finds to basement tchotchkes to haphazard collectibles, all referring to different cultural periods or phenomenons. 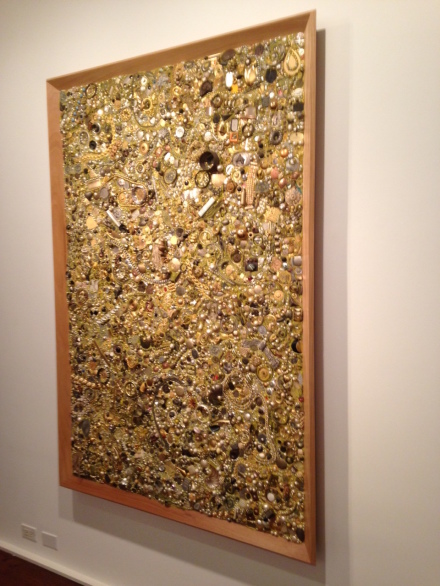 While the majority of exhibited works are flat-surfaced, covering wood panels with countless objects ranging from buttons to jewelry, a few three-dimensional works, including a set of torpedo-like sculptures, and a strangely compelling duo featuring a water jug and detergent bottle, further Kelley’s interest in building totemic artifacts, fusing cultural images and icons into an object that seems to expand in significance and meaning with each new detail.  Subverting connotations attributed to a lone object, the artist problematizes definitions of the banal, valuable, and aesthetically pleasing, allowing the weight of his cast-off objects to ultimately create a gleaming new form.  Candid in their embrace of the everyday, these attempts to delve into the past, and the bygone moments of human life in modernity draw on their ultimately futile missions, and ultimately create a work composed from the stagnated detritus of memory and action in tandem. 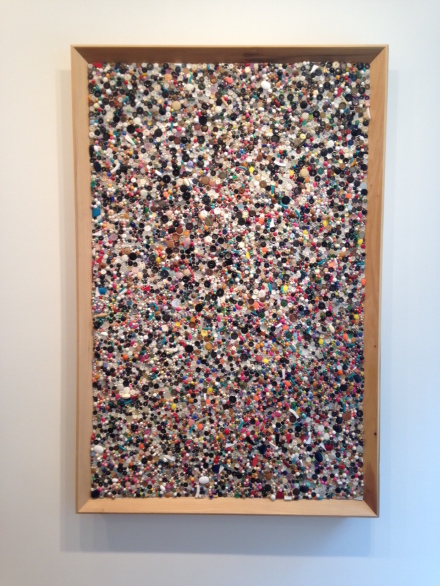 Kelley’s practice long drew on his rebellious stand against exclusive class systems and their impositions on personal identity and self-realization.  His mastery, however, was in his achievement of such scrutiny through the employment of shabby, yet unabashedly nostalgic materials.  Thus, memory serves as a catalyst for Kelley to expand into a larger trajectory on identity, self-discovery, and contemplation.  Suppressed or cherished components of memory, especially childhood objects, find their voices in his complex practice, one which draws on the abject and destabilized to expand their meanings and readings.

Mike Kelley: Memory Ware is on view at Hauser & Wirth through December 23, 2016. 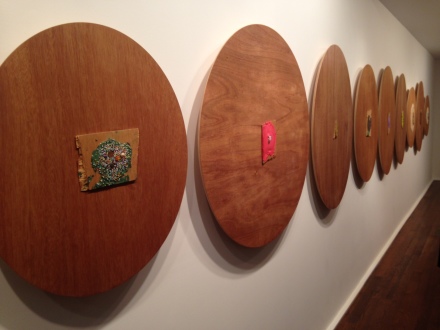 This entry was posted on Friday, December 23rd, 2016 at 12:52 am and is filed under Art News, Featured Post, Show. You can follow any responses to this entry through the RSS 2.0 feed. You can leave a response, or trackback from your own site.