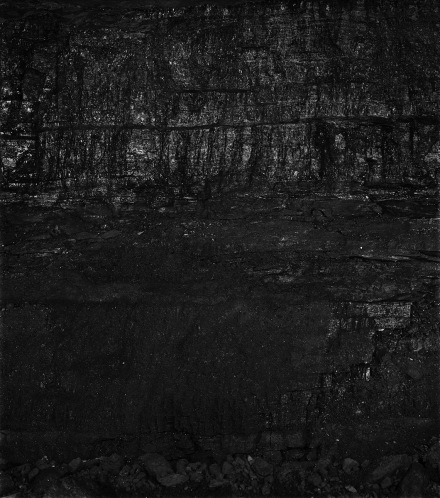 A pairing of large photo works of coal mine walls with smaller photochemical pieces, Peter Blum’s exhibition of works by Miles Coolidge reinvigorates a dialogue around 20th century inquiries into chemistry, art production, and process imagery, presenting shared sensations of something physically visceral, all realized via inkjet pigment or liquid chemicals, realized in a manner evoking the sublime. 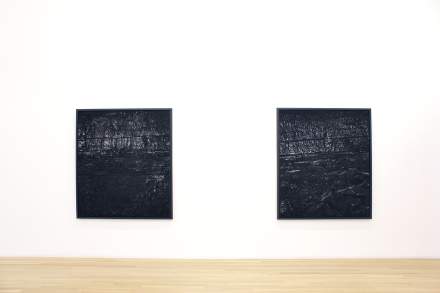 At the forefront of the exhibition is the imagery and materiality of Coolidge’s inkjet prints, which possess a lush blackness specific to their subject and medium – large format closeups of a coal mine wall rendered in an ink that has only become standard within the past two decades.  The matte depth and palpable texture of inkjet pigment in these works directly overlaps with their subject matter, as Coolidge renders carbon with carbon.  This alchemical poetic, spread throughout his series, draws viewers into Blum’s space while underscoring the physicality, as well as the variations in shade, of coal as a substance, as a fuel, and as something bringing goods and warmth, not to mention climate change, to the world. Coolidge evocatively presents these pieces, iconic of a smelting furnace industry, as a driver of a bygone era. 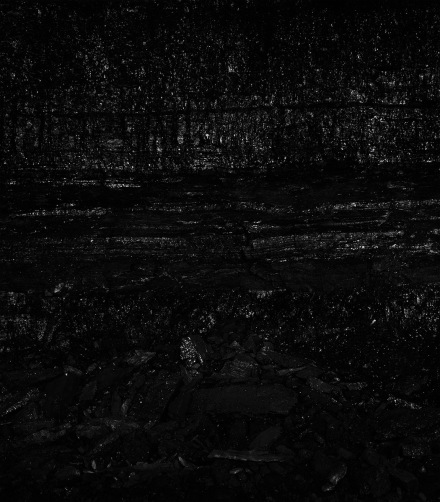 The material sentiment of Coolidge’s coal photographs links them to a second body of work in the exhibition hanging in the rear gallery, one that also functions as an elegant office, which helps viewers imagine situating Coolidge’s work in a parlor or a study.  Such an environment is apt for these smaller works, as it highlights their place within the process of scientific inquiry.  With these pieces, Coolidge documents the continuation of a chemical experiment by Runge that leads to art dialoguing with the history of photography, biochemistry and a broader movement to plumb the chemistry of photography as a materiality and subject matter in and of itself.

There’s a salience to revisiting experimentation with chemical media today, as the largely completed crossover to digital inkjet from c-prints has been thoroughly vetted as equal standing with traditional photographic development processes.  Blum’s pairing of Coolidge’s series situates the exhibition within a larger discourse around the nature of photography itself – a vein that a range of contemporary artists are working in with novel combinations of paper and chemicals – Walead Beshty, Liz Deschenes, Matthew Brandt, and Eileen Quinlan, among others who explore the substrate and activations of photographic media, some of whom were featured in the Getty Museum’s seminal “Light, Paper, Process” show in 2015. 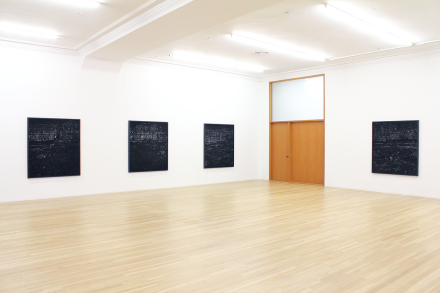 Beyond using his studio as (both analog and digital) laboratory, Coolidge ventures into the field in pursuit of scientific inquiry: he engages with a working mine in Germany in its twilight. The mine in which he made the pictures- Bergwerk Prosper-Haniel will be the last operating underground coal mine in Germany when it closes in 2018.  This is where Coolidge’s work can be linked to the Becher’s, whom he studied with at the Kunstakademie Dusseldorf.  Bernd and Hilla Becher have talked about how the shift to buying cheaper and cleaner natural gas from the East removed the economic incentive to mine coal in the Ruhr, leading to social and economic upheaval in the region- and how their work’s focus on obsolescent industrial architecture was directly inspired by these observations. Robert Smithson’s work A sedimentation of the mind :Earth Projects also comes to mind as a historical anchor.  Coolidge’s coal and chemical reaction ‘portraits,’ if you will, also continue the narrative of his own studio process over the last 25 years: mappings of landscape, water bodies, and now underground terraforma in relation to the chemical heritage of its mining. 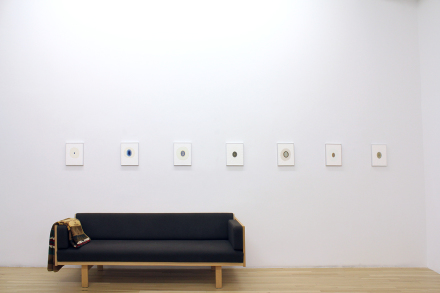 This entry was posted on Friday, February 3rd, 2017 at 12:02 pm and is filed under Art News, Featured Post, Show. You can follow any responses to this entry through the RSS 2.0 feed. You can leave a response, or trackback from your own site.