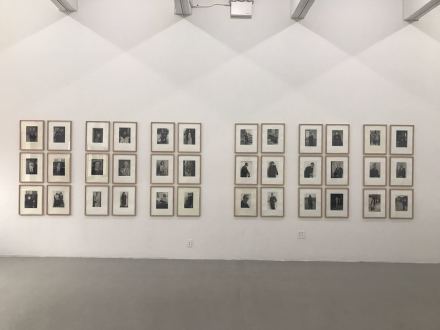 August Sander, Untitled (Group for Sherrie Levine Composed by Gerd Sander in 2012), all photos by Osman Can Yerebakan for Art Observed

Currently occupying the top floors at Hauser & Wirth’s temporary 22nd Street space, Serialities provides the viewer with an ample range of works adopting visual repetition in photography, sculpture, and drawing as a manifestation and elaboration of their conceptual and narrative crux.  Organized with French art dealer Oliver Renaud-Clément, the exhibition finds its source of inspiration in August Sander’s decades-spanning photography project People of the 20th Century, a massive collection of 600 photographs in which Sanders chronicled German daily life through images of individuals of his home country between the 1910’s and the beginning of the 1950’s.  While Sanders sub-categorized his collection based on occupation or social class, People Who Came to My Door, one of his more personal and intimate groupings, anchor this group exhibition.  Through Sanders’s mellow, balanced approach to his subjects, he captures poses of deliberation and vulnerability, exposing their inner selves for the artist’s lens and viewer’s eyes.  His interest in depicting various social and economic groups in Germany before and after World War II delivers an inquisitive social landscape overall. 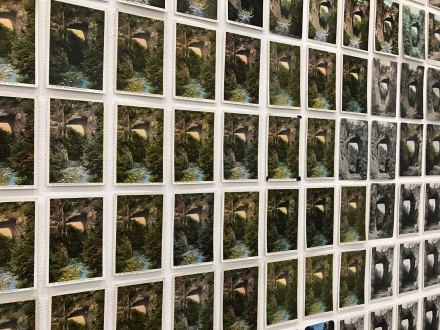 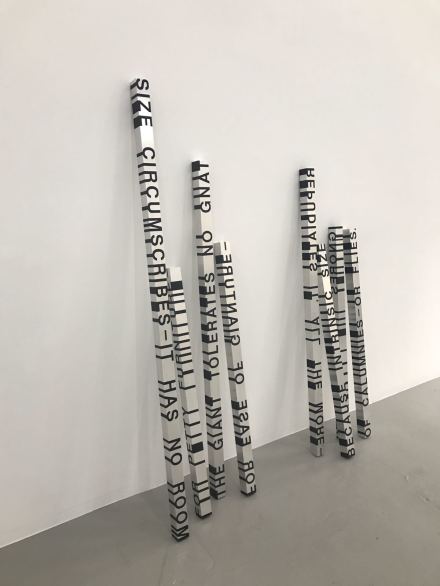 Building an intergenerational narrative while complimenting the exhibition’s homage to Sanders is Sherrie Levine’s 2012 series After August Sanders, a recent addition to the artist’s eminent series of photographs for which she directly appropriates works from 20th century male artists.  Almost identical to their source material, Levine’s shots require laborious examination to reveal their subtle deviations, slight alterations in tone or shifts in angle.  Similarly, Roni Horn’s work Portrait of an Image (with Isabelle Huppert) captures the actress’s distinct and intense facial expressions in a wall-spanning photography installation.  The show also features a series of leaning sculptures by the artist, beaing lines from various Emily Dickinson poems inscribed in minimal and geometric fonts onto freestanding plastic and aluminum rods. Legible on a single and abstracted on the other three, Dickinson’s introspective and spirited voice contrasts the demure and patriarchal voice that such Minimalist art tropes arguably suggest. 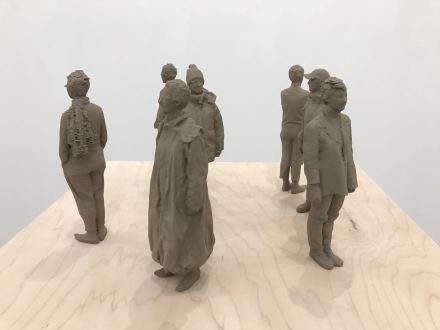 By contrast, Natural Bridge, Zoe Leonard’s romantic and contemplative installation of hundreds of discarded postcards, captures the same Virginian bridge in various states if disintegration, immersing the viewer into an ambiguous nostalgia writ large across the object’s surface, while Isa Genzken’s circle of nine mannequins don items of fashion and industrial residue that hint at a sense of millennial angst underneath.  In each piece, from Louise Lawler’s dozens of generic champagne glasses reading “After the War” or “Prominence Given, Authority Taken” to Sophie Calle’s Collateral Damage, Targets series, in which criminal mugshots used by the police for target practice are blind-folded and joined with sandblasted glass, seriality is the common thread, repetitions that weave throughout the exhibition. With works as impressive in scale and elaborate in arrangement as these, the subtle variations and details do make for a quiet, but endlessly commanding conversation.

Serialities is on view at Hauser Wirth through April 8, 2017. 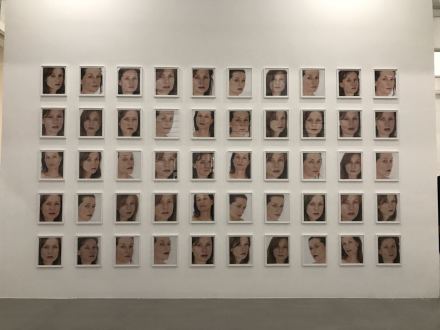 Roni Horn, Portait of an Image (with Isabelle Huppert) (2005)

*All photographs are by Osman Can Yerebakan for Art Observed.

This entry was posted on Friday, March 31st, 2017 at 12:32 pm and is filed under Art News, Featured Post, Show. You can follow any responses to this entry through the RSS 2.0 feed. You can leave a response, or trackback from your own site.