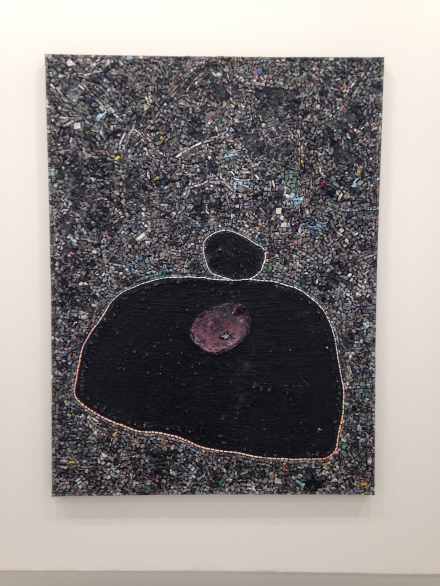 Artist Jack Whitten has opened an exhibition of new work in New York this spring at Hauser & Wirth, his first show with the gallery since joining its roster last year.  Presenting pieces from the last two years of practice, Whitten’s work, on view at the gallery’s temporary 22nd Street location, continues his exploration of the canvas as a site for engagement with the material consistency and visual expressivity of paint in a manner that often eludes easy classification as abstraction or minimalist technique. 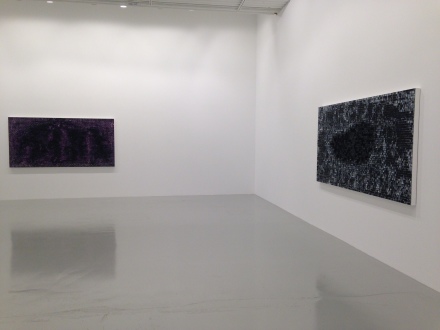 Whitten’s work has been undeniably shaped by his life and experiences in the United States, from his engagement with the Civil Rights movement during his time as a young student, to the catastrophic effects of the 9/11 terrorist attacks (which he witnessed first-hand) on through the political conflicts of our current era.  Throughout his life and career, the Alabama-born, New York-based artist has continued to engage with these moments, drawing on the canvas as a site to explore and experiment with the emotional and historical content of the country’s collective memory, framed by his own contemplative mode of abstraction. 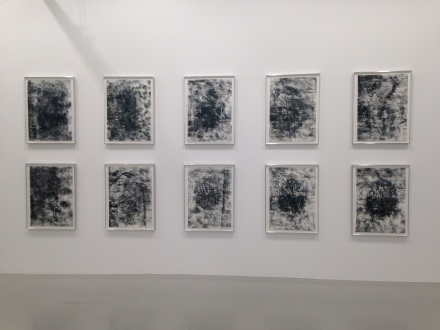 Whitten’s exploration of non-representative forms draws on both process and materiality, using his paints as a subject in their own right.  His works follow the paint through a range of chemical treatments and sculptural courses, often requiring an engagement by the viewer that welcomes a closer bond with the work through the act of reading and examining the piece’s trails of paint as both evidence of process and visual phenomena in their own right.  Whitten is exacting of his viewers, asking for their commitment to the work, and to the act of exploring its bounds in pursuit of its modes of creation. 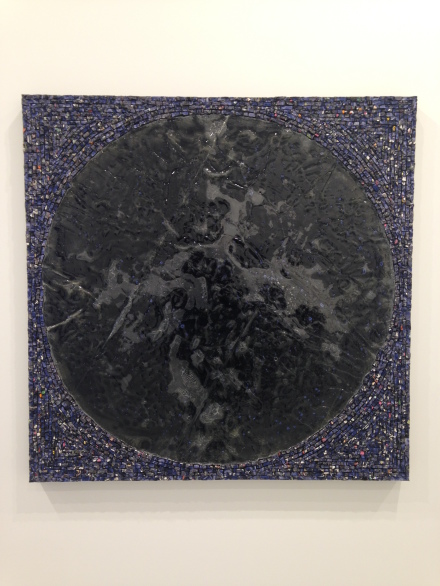 Geometric forms, stemming from Whitten’s interest in space and astronomy as catalysts for transcendence, result in earthly tactility and otherworldly surfaces in tandem, often giving the impression of harmoniously arranged mosaic tiles through the dissection of acrylic paint into tiny bits, later drying them before applying these fragments onto wet paint akin.  Creating mosaic-like works through these assemblages (frequently seen in his Portals series), Whitten’s use of paint in its various stages of drying creates semi-abstract scenarios that draw strength from their multiple layers of material, creating an opportunity to engage with the artist’s own interest in astrophysics and deep space as visual analogs.  Black Monolith X, Birth of Muhammad Ali, a new addition to his ongoing series dedicated to influential African American figures, pays homage to the boxing icon on a scale on par with Quantum Wall and Portals series, projecting a grandiose composition and commanding visual effect framed by his meditative, layered process.

This entry was posted on Monday, April 3rd, 2017 at 4:32 pm and is filed under Art News, Featured Post, Show. You can follow any responses to this entry through the RSS 2.0 feed. You can leave a response, or trackback from your own site.