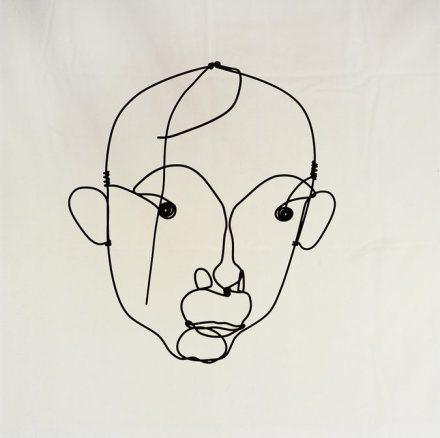 Calder/Miró: Constellations, on view through June 30, 2017, presents the work of Alexander Calder and Joan Miró at Pace Gallery and Acquavella Galleries, respectively, a two-venue exhibition aiming to present the distinct bodies of work and complementary concepts shared between the two artists while they were separated on either side of the Atlantic during World War II.  Presenting approximately 60 sculptures, paintings, and works on paper, the show presents a dialogue highlighting formal, social and political concerns informing the processes of both artists at a distinct conceptual and aesthetic high point for both their careers. 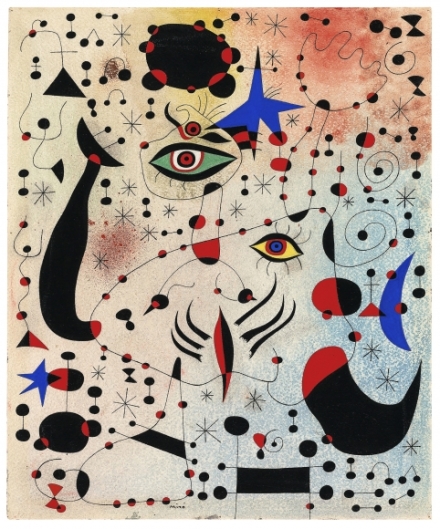 Joan Miró, Cyphers and Constellations in Love with a Woman (1941).

Neither of the series on view was actually named “Constellations” by the artists themselves, though this thematic link is clear in the works’ exploration of interconnectedness and space. This is the first time these roughly contemporaneous bodies of work will be brought together.  Stemming from the artists first meeting in Paris in 1928, and subsequent friendship (one admittedly based more on drinking and dancing than art), the work nevertheless shows a similar temperament and sensibility throughout each artist’s works.  The parallels between Calder’s wooden sculptures and mobiles, and Miró’s small gouaches on paper are evident.  When these “constellations” were created, 1943 in the case of Calder, and 1940 in the case of Miró, the artists had very little contact with each other.  This is the ironic simultaneity that lies at the heart of this exhibition. As Pace President Marc Glimcher states, “the two artists tapped into a powerful artistic current, which allowed them to create these unique but resonant series, while they were totally isolated from each other.” 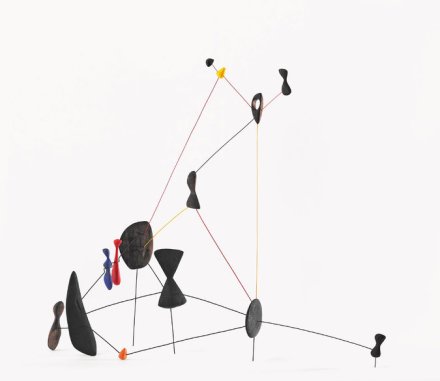 In Calder: Constellations, the artist’s output in the year 1943, plus a few key exceptions that span the years of 1942-1950, is examined.  During this time, the artist returned to working with wood, as sheet metal was made scarce due to war-time rationing of materials.  Carved biomorphic forms, painted in bright, monochromatic colors are joined together with steel wires, while wall sculptures and standing or suspended works are presented together.  These constellations (thus named by James Johnson Sweeney and Marcel Duchamp in early 1943), reveal Calder’s enduring interest in space and delicacy. 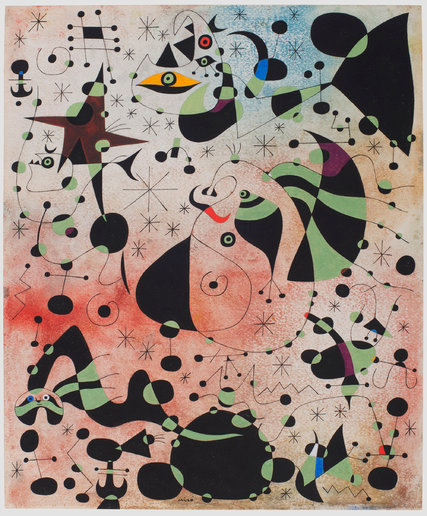 Miró: Constellations traces one of the crowning achievements of the Spanish artist’s career, a suite of gouaches produced in the early years of World War II. The same techniques were applied throughout this series, in which Miró used an oil wash to create a textured, hazy backdrop for meticulously detailed motifs. Stars, eyes, ellipses, and crescent moons emerge in vibrant primary colors, depicting a “private universe far removed from the turmoil and terror of the war.” When Miró and his family fled France for Spain before the German invasion of June 1940, he took virtually nothing with him except a portfolio of ten completed Constellations.

Together these exhibitions speak to an almost entirely coincidental, yet parallel production of these forms during the outbreak of the war, a time when the communication between Calder and Miró was interrupted. Without contact, the two artists created these series of works in tandem, sharing a voice and formal language that stands as an enduring document of both artists’ respective catalogues.  Today, the Constellations stand as a testament to the remarkable ways in which artists’ autonomy and shared visions can manifest.

This entry was posted on Friday, June 30th, 2017 at 4:30 pm and is filed under Art News, Featured Post, Show. You can follow any responses to this entry through the RSS 2.0 feed. You can leave a response, or trackback from your own site.