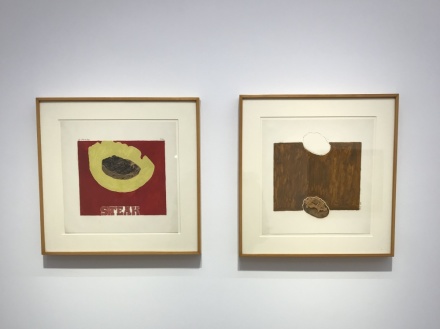 Almine Rech Gallery, one of Paris’s foremost galleries, opened its first New York location more than a year ago on the Upper East Side, bringing with it a unique program that mixes a strong artist roster with a consistently adventurous curatorial project.  For its most recent venture, the gallery has brought together key figures from the canon of 20th century Western art for Words Without Thoughts Never to Heaven Go. Adapting its title from a line in Shakespeare’s Hamlet, the exhibition investigates ways artists use text as an allegorical element. Serving as a chronological and thematic starting point to the exhibition is Être ou ne pas être, Picasso’s 1912 painting considered as one of the foremost examples of appropriation of text in modern painting. Declaring “to be or not be” in French with gouache on paper, Picasso not only pays homage to one of the most emblematic texts ever written, but he also questions the mimetic essence of a painting. Can a painting of words serve to depict an image? 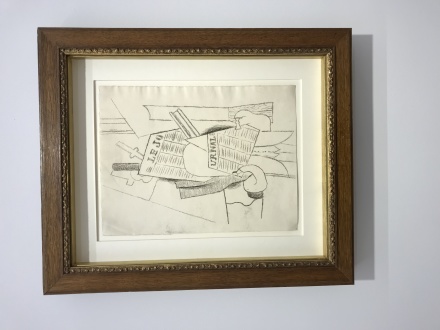 Organized by curator Dieter Buchhart, the exhibition includes an intergenerational checklist roughly divided across two rooms. In the first room, viewers encounter earlier examples of text integration in works on canvas or paper. Eminent in each of art is the artist’s commitment to utilize words in reference to the accompanying image. Picasso’s Man With a Newspaper drawing is striking with its merger of abstraction, Cubism, and text, with lines of text blending into the artist’s structural depiction of the human figure. Ed Ruscha’s Steak, by contrast, merges an image of the namesake dish with words STEAK underneath. With its commercial aesthetic and humorous use of words and image, the painting exemplifies the connection artists build between cultural impact of figures and commercial language. 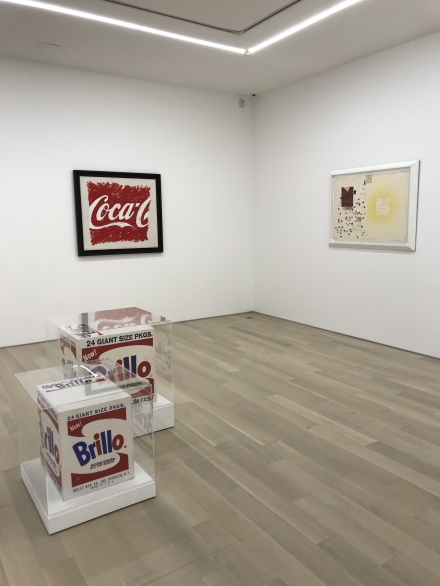 The second room hosts examples of contemporary works utilizing words in a broad range of applications and pursuits. Bruce Nauman’s None Sing/Neon Sign, for example, demonstrates the artist’s interest in subverting visual and ideological undertones of language, juxtaposing an ironic duality between two expressions composed of same letters. Robert Morris also joins the exhibition with three works that are equally playful with their approach to text. In I-Box, a cabinet door in the shape of the letter I is left ajar just enough to reveal the nude image of Morris. Location is a lead and aluminum board with numbers on four sides meant to be adjusted to indicate each side’s distance to floor or ceiling. A surprise in the exhibition is In Bianco, a collaborative work by Andy Warhol, Francesco Clemente, and Jean-Michel Basquiat. In this 1984 silkscreen acrylic and pastel on canvas, each artist implements his signature style in pursuit of the era’s colorful visual fashion and thematic tendencies.

Taken as a whole, the show is an intriguing interrogation of textual impulses in modern art, one which serves as a prompt to the viewer to look at the words as much as the contexts between each word to find the artist’s deeper meanings.

Words Without Thoughts Never to Heaven Go is on view at Almine Rech Gallery through December 16th, 2017. 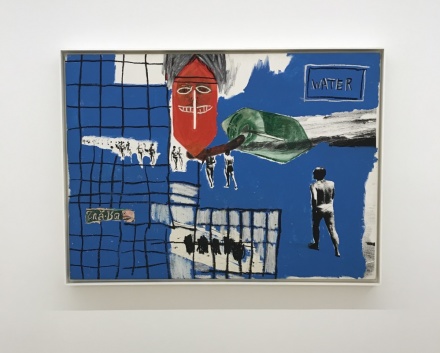 All images are by Osman Can Yerebakan for Art Observed

This entry was posted on Thursday, December 14th, 2017 at 1:58 pm and is filed under Art News, Featured Post, News, Show. You can follow any responses to this entry through the RSS 2.0 feed. You can leave a response, or trackback from your own site.