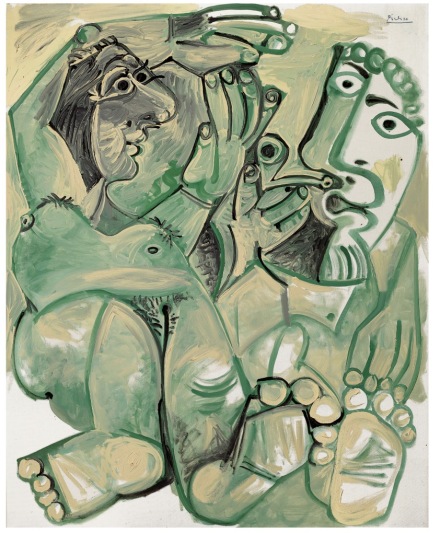 With several strong auctions behind them in the past months, the last Impressionist/Modern Evening Sale of the first half of 2019 looked to be a victory lap for Christie’s, a last shot at European collectors after a bustling spring season capped off by Basel and the Biennale. But a last burst of buyer interest wasn’t in the cards this evening, as the London auction house struggled royally over the course of a 34 lot sale that saw 10 of the works go unsold, including several major trophies that drove the sale to an anemic final of £36,413,750.

The sale started off with a relative lack of spirit, despite an Egon Schiele work in the first lot quadrupling estimates for a final of £1,271,250. Following this sale, the momentum seemed to quickly fade, as a Sonia Delaunay work passed in the third lot, and a major highlight, Matisse’s Le collier d’amber, failed to reach its £5 mil low estimate. For a moment, it seemed like the sale might get some of its spirit back in the next few lots, as a Picasso portrait achieved its estimates and finished at £12,464,250, but the sale was quickly deflated only two lots later, as the cover lot, a striking Fernand Léger, failed to reach estimate and went unsold, shooting a hole in the auction house’s estimates for the night.

The rest of the evening seemed to follow a similar pathway, as a number of works would fall shy of estimate, including a Henri Laurens & Pablo Picasso collaborative sculpture, and works by Dali and Magritte, while an Yves Tanguy serving up one of the few mid-sale highlights as it topped estimate for a £3,131,250 final. The overall pace tended towards works just nudging over estimate, finding a buyer at its minimum or just scraping past as Jussi Pylkkanen  let works float into or just below the estimated a range. Even so, it didn’t stop a series of works by Picasso and Pissarro from going unsold, with a Paul Signac at £2,291,250, and a last Picasso at £2,211,250 serving as the few last strong sales of the evening.

The attention now turns to Sotheby’s, where it should be interesting to see how the sudden boost in the house’s share price, and its sudden turn towards a private company, might affect its performance in the face of a seemingly sluggish market.

This entry was posted on Tuesday, June 18th, 2019 at 7:46 pm and is filed under Art News, Featured Post, Show. You can follow any responses to this entry through the RSS 2.0 feed. You can leave a response, or trackback from your own site.