Last night, Sotheby’s confirmed the art market’s return to form as 50 of the 53 lots on offer sold at its Contemporary art sale.  Tallying $189,969,000 in sales, well over the house’s $162 million pre-sale estimate, 39 works fetched more than one million dollars, with two selling for more than $30 million, and seven making more than $5 million. Further to this, the sale achieved the two top lots achieved so far at New York’s Contemporary sales week, surpassing Christie’s sale of Jasper Johns Flag for $29 million on Tuesday night  – Andy Warhol’s Self-Portrait more than doubled its high estimate to sell for $32,562,500, and an Untitled Mark Rothko painting from 1961 soared over the high estimate to sell for $31,442,500.

The sale’s cover lot, Andy Warhol’s purple Self Portrait, was the evening’s top lot, selling to an anonymous telephone bidder for $32.6 million, easily beating its $10–15 million estimate. The work was consigned by the fashion designer, movie director and collector Tom Ford. Warhol created self-portraits throughout his career. Painted in 1986, a year before Warhol’s untimely death, the work is one of five large-format self-portraits from that time of the artist in his signature fright-wig, each a different color. The Museum of Fort Worth has the green one, The Andy Warhol Museum in Pittsburgh has one in yellow and another in blue. Peter M. Brant has a red one which he bought at Phillips de Pury in New York in May 2002 for $3.2million. Other works by Warhol achieved strong prices, including Four Flowers which sold for $7,642,500, above the high estimate of $7 million and Statue of Liberty, which sold for $4,330,500.

There was also a lot demand for classic material. Jackson Pollock’s Number 12A, 1948: Yellow, Gray, Black, sold for $8.8 million, double the low end of the $4-6 million estimate. The densely-patterned work on paper featured in the famous 1949 Life magazine story ‘Jackson Pollock: Is He the Greatest Living Painter in the United States?’ and last sold at Sotheby’s in November 1987 for $396,000. Joan Mitchell’s abstraction Vera Cruz sold for $4,002,500 to the winner of Warhol’s Holly Solomon who caused a stir at Christie’s the previous night – the New York Times have identified as Miami-based Jon Colby. Cold Mountain I (Path), the most important work by Brice Marden ever to appear at auction, failed to match it’s low estimate of $10million. However, with buyer’s premium it sold for $9,602,500, almost doubling the artist’s existing record that was set in May 2008.

There was also a lot of activity and great results for younger artists such Maurizio Cattelan and Christopher Wool. Eight bidders took part in a prolonged bidding contest for an Untitled work by Maurizio Cattelan from 2001, which portrays the artist as a tunneling burglar. The room erupted into applause when the sculpture eventually sold to a telephone bidder for $7,922,500, well above the high estimate of $4 million. The sale marks a new record for the artist at auction, the previous record was set when Cattelan’s famous sculpture of the Pope crumpled under a black meteorite sold at Christie’s in New York for $3,032,000 in 1999. 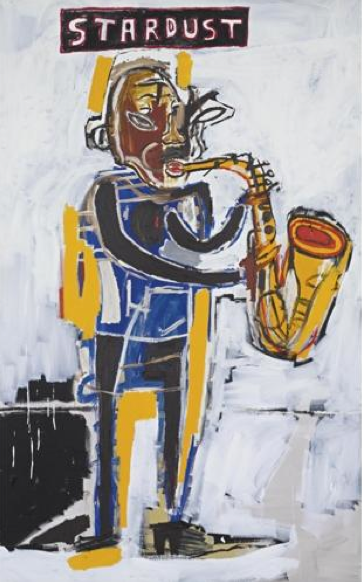 One of the most exciting competitions to witness was a battle between Larry Gagosian and an unidentified Spanish-speaking woman who sat opposite him, over the sale’s penultimate lot – Jean-Michel Basquiat’s Untitled (Stardust). The work eventually sold to the unidentified woman for $7,250,500, many multiples above the high estimate of $2.5 million. Further works from the estate of the artist that achieved strong prices were Flash in Naples, which sold for $3,330,500, and an Untitled collaboration between Andy Warhol and Jean-Michel Basquiat, which fetched $2,658,500.

Sculpture sales were another important feature of the night’s sales. Strong prices were achieved for works by de Kooning, Louise Bourgeois, Jeff Koons, Dan Flavin, Donald Judd and Anish Kapoor, among others. Richard Serra’s post-minimalist, floor-to-wall sculpture Corner Prop only attracted one bid of $1.7 million -enough to secure a new record for the artist at auction. Bidding was thick and fast for Juan Muñoz’s Conversation Piece III which sold to a telephone bidder for $4,898,500 – smashing the previous record that was set at Sotheby’s in November 2004, when a Munoz made $1,202,500.

The Contemporary sales continue tonight at Phillips de Pury where the debt-laden CNET founder Halsey Minor will be selling off his collection.

This entry was posted on Thursday, May 13th, 2010 at 7:10 pm and is filed under AO On Site, Auction Results. You can follow any responses to this entry through the RSS 2.0 feed. You can leave a response, or trackback from your own site.