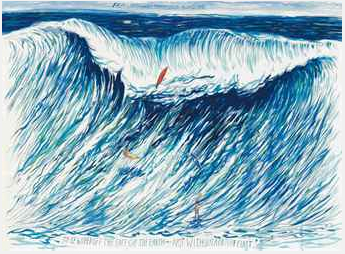 Ben Stiller and David Zwirner teamed up with Christie’s and hosted a much-hyped auction Thursday night with all proceeds benefiting relief efforts in Haiti. The event brought a little bit of LA to New York – Christie’s flew in Andrea Fiuczynski, president of Christie’s in Los Angeles, to conduct the auction, and a handful of celebrities were seen in the sales room. Fiuczynski reminded attendees, among them Ben Stiller and wife Christine Taylor, Jennifer Aniston and beau Justin Theroux, as well as tennis legend John McEnroe, that Christie’s would not be collecting a premium and that US buyers could claim a tax deduction for anything purchased that evening. 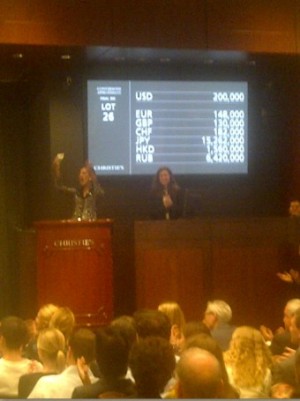 Christie’s Andrea Fiuczynski at the rostrum, via ArtObserved 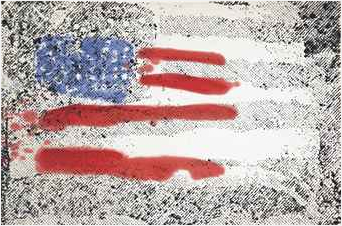 Nate Lowman, Birthday Cake Painting #2, 2011 (realized $140,000), via Christies.comThe auction easily passed its high presale estimate of $10 million and raised $13.7 million for all twenty-seven lots sold, setting a record for a charity auction at Christie’s. Many of the pieces included in the sale were made specifically for the auction, and there was applause after each lot, even for the few works that did not exceed presale estimates. The artist record was set for Raymond Pettibon, who had two works included in the sale. The first was the cover lot and broke the artist’s 2006 record when it sold for $760,000 to Philippe Segalot, seated at the back of the room. No Title (From life to….) held the record for just a few minutes before Pettibon’s second work, titled No Title (But the sand…) trumped the earlier piece when it sold for $820,000. 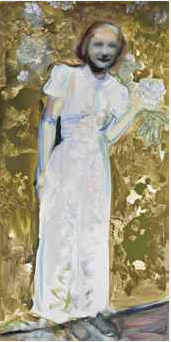 Marlene Dumas, My moeder voor sy my moeder was (My mother before she became my mother), 2010 (est. $600,000-800,000, realized $2 million), via Christies.com
Artist records were also set for Glenn Ligon, Nate Lowman, and Adel Abdessemed. While many auction regulars were in the house and kept the bidding lively, the “front row” bidders also did their share of buying. Jennifer Aniston was the winning buyer of the record-setting Ligon ($450,000), and Ben Stiller took home Nate Lowman’s Birthday Cake Painting #2 for a record $140,000. In a statement released by Christie’s after the sale Stiller said: “We are so grateful to all of the artists who dedicated their time and talent to help raise an extraordinary amount of money that will be utilized as efficiently and quickly as possible to help the people of Haiti. Christie’s and David Zwirner Gallery worked very hard to make this a success and I am thankful to have them as partners in this effort”
-J. Mizrachi
Related Links:
Christie’s E-Catalog and Results [Christie’s]
Ben Stiller and David Zwirner Exult as Christie’s Star-Packed “Artists for Haiti” Sale Tops $13 Million [Artinfo]
U.S. auction for Haiti raises nearly $14 million [Reuters]
Jennifer Aniston Sets Record Price for Glenn Ligon at $13.7 M. Artists For Haiti Auction [New York Observer]
Actors, Artists Aid Haiti [Wall Street Journal]
Heavyweights for Haiti [Interview Magazine]
Sean Penn, Ben Stiller are helping Haiti rebuild [CNN]

This entry was posted on Friday, September 23rd, 2011 at 6:16 pm and is filed under AO On Site, Auction Results. You can follow any responses to this entry through the RSS 2.0 feed. You can leave a response, or trackback from your own site.