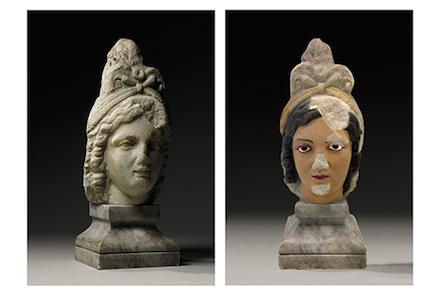 On view at MoMA PS1 in New York is an exhibition of 5 new works by Francesco Vezzoli – ancient Roman busts painted in the manner in which they were probably originally decorated. Entitled Teatro Romano,” the exhibition, which saw delays after a church Vezzoli had intended to export to the country was blocked by customs, will continue through March 9th, 2015. 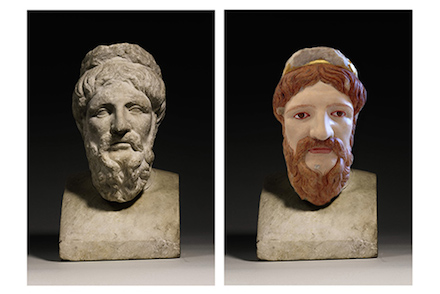 These five works are a product of extensive research about the use of color in antiquity. The new busts are displayed alongside the original inspirations, and executed in a vivid palette of yellows, blues, reds, and greens, which research has confirmed were the colors used to paint statuettes like these in ancient Green and Roman times. 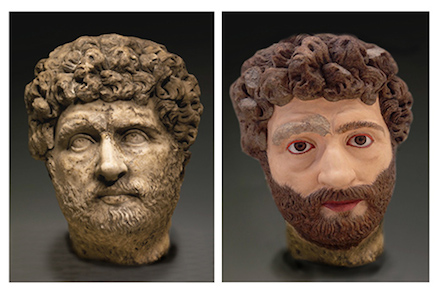 While white marble was the typical material used to make these statuettes, several decades of research have determined that these icons were likely painted over with bright colors, which have since faded and deteriorated. Vezzoli’s goal was to restore the look of the original works as the ancient Romans saw them then, playing on the intersections of history and imagery that sits at the heart of Italian culture.  Vezzoli collaborated with a team of archaeologists, conservators, and polychrome specialists in order to determine the most accurate methods for coloring the statues as they originally were. The original works date back from the first and second centuries A.D., and Vezzoli’s Roman Imperial busts serve to “restore to contemporary imagination the decorated surfaces that have faded away” over nearly 2000 years. 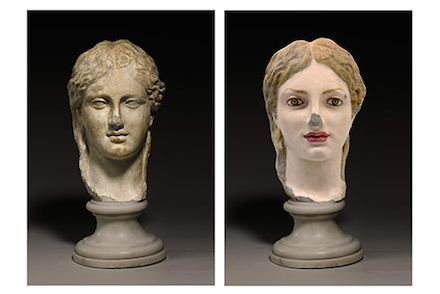 While the historical relevance of the project remains foregrounded, there’s an eerie ambience that surrounds the works, particularly in consideration of the newly returned eyes in each of the works.  Vezzoli’s artistic operation returns a distinct personality to the works that was not so immediately seen before applying the paint.  In one work from the series, his sculpture takes on a haughty, pouting expression that immediately strikes the viewer as somewhat off-putting.  One finds themselves wondering what the impulse was to give these expressions to the works on view, whether it be a proud glare or a placid, calm gaze. 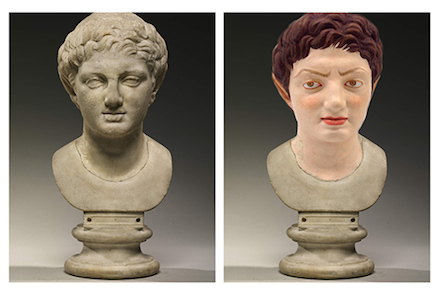 What results from Vezzoli’s historical restoration, and the context in which he presents it, plays on similar themes as the painted Chinese vases created by Ai Weiwei in past years, historical objects brought up to date through a reinvigoration by the artist’s hand.  Even so, much like in Ai’s case, the act leaves the artistic impulse somewhat unanswered.  What’s more, the cultural implication of an Italian or Chinese artist appropriating his own cultural objects opens interesting questions into the authority of these works.  One wonders if the same bust, painted by an American or French artist would be considered appropriate or acceptable.  In either case, Vezzoli’s operation opens the door to meditations on authenticity and representation in both artistic and archaeological studies.

The current exhibition at MoMA PS1, Teatro Romano, will continue through March 9, 2015.

This entry was posted on Thursday, March 5th, 2015 at 12:00 pm and is filed under Art News, Featured Post, Show. You can follow any responses to this entry through the RSS 2.0 feed. You can leave a response, or trackback from your own site.