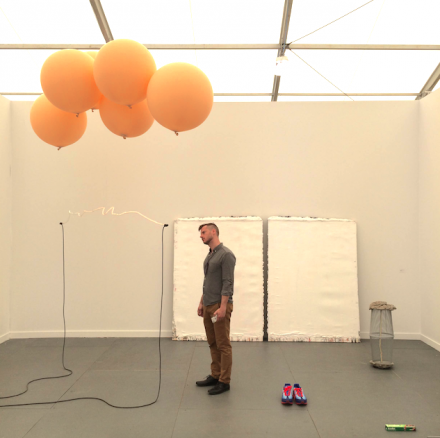 The doors are open on Frieze New York, marking the early days of the summer art season with a major art event up the East River on Randall’s Island.  Returning for its fourth year, the fair has come into its own as a dedicated staple in the New York Art Calendar, and its presentation this year seems to echo it, with a stripped back tent design that seemed to stretch out much longer than in previous years, but distilled the experience down to only three rows of booths, with the occasional inlet allowing for an enjoyable wander through the space.  The VIP opening launched Wednesday morning for a quiet preview where a number of major collectors and celebrities strolled the aisles, among them Neil Patrick Harris, Mike Meyers, Uma Thurman, Leonardo DiCaprio and Richard Gere and François Pinault. 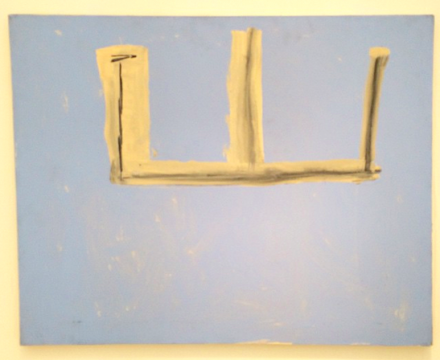 The works on view were strong across the board.  A bizarre polyester sculpture by Juan Muñoz was on view at Hauser and Wirth, featuring one of the artist’s signature manipulated human forms, this time expoxy and sand, juxtaposed against a blue and white striped wall emulsion by Martin Creed.  In another corner, Galerie Nicolai Wallner was presenting a shimmering series of Jeppe Hein works, including a set of silver balloons, floating just out of reach.  Another highlight came at The Breeder, where artist Andreas Angelidakis had installed an immense, stepped rug installation that invited viewers to sit on its surface.  Over at Lehmann Maupin, an immense sculpture with mounted video screens, created by Tony Oursler was confounding visitors, moving one eye in a haunting approximation of human engagement.  Ryan Gander was also on hand, presenting a cluster of arrows jutting into the corner of the Lisson Gallery booth, as were a pair of Cory Arcangel’s recent sculptural assemblages, prominently featuring pool noodles and a Homer Simpson skateboard. 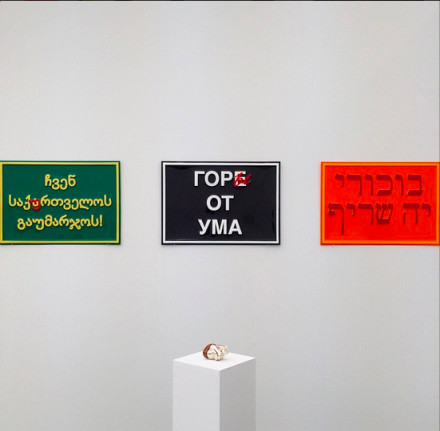 Slavs and Tatars at Kraupa-Tuskany Ziedler, via Art Observed 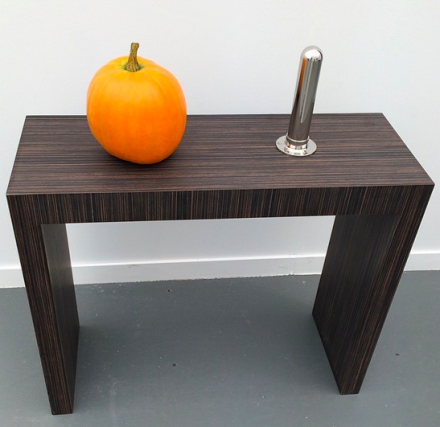 Much in the vein of Arcangel’s work, a number of galleries seemed particularly interested in clustered, haphazard installation this year.  Josef Strau’s cluttered, childlike assemblages at Greene Naftali expressed a haphazard logic to their assemblage, covered in papers, colorful objects and lighting fixtures, while Trisha Baga, showing at Berlin’s Société, took a more domestic approach, covering cardboard boxes with a digitally printed blanket and a strangely executed approximation of a bowling trophy.  The gallery also had a coat rack-inspired work by Bunny Rogers, priced at $20,000. 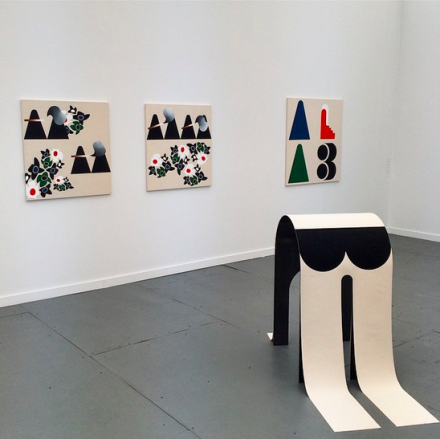 Math Bass at Overduin and Co, via Art Observed 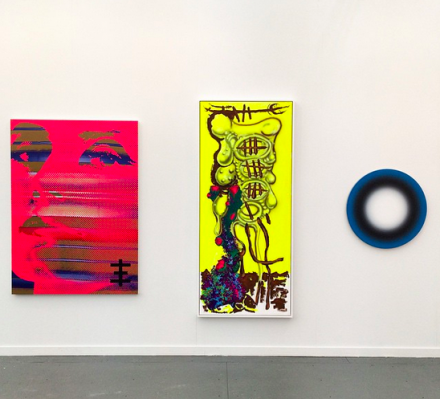 Also trending this year is a focus on painterly abstraction, as a number of booths sported a back to basics approach, sporting a series of vivid, colorful canvases.  Almine Rech was a leader in this category, presenting a series of new works by Richard Phillips that were complemented by pieces in a similar neon color palette from Aaron Curry and Ugo Rondinone, among others.  At Los Angeles’s David Kordansky Gallery, Lesley Vance was presenting a different take on the medium: shadowy, lithe stretches of color and form that felt indebted to digital surfaces. 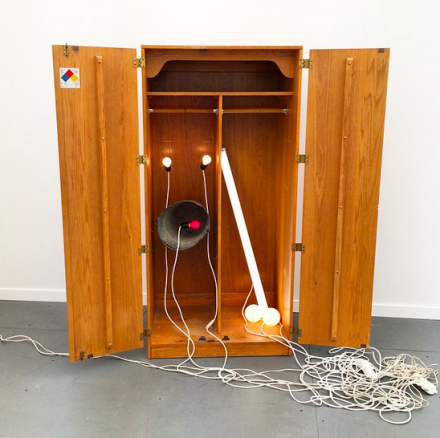 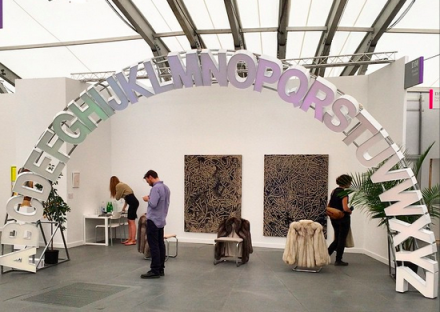 Sales were strong during the opening days of the fair.  Highlights included a spare Robert Motherwell that had sold by Thursday at Paul Kasmin Gallery for $350,000, as well as Pace Gallery, which sold several of their impressive Robert Tuttle compositions, priced at $35,000.  CLEARING was presenting new drawings from Calvin Marcus, as well as a unique group of reprinted catalogs by Harold Ancart.  Marcus’s drawings, using a wild hand and imaginative perspective, were selling in sets for $15,000.  SculptureCenter was also presenting an impressive Richard Serra print, priced at $40,000, while a comical Margaret Lee edition sat adjacent, with an asking price of $15,000.

The Frieze Projects section had also gotten off to a strong start.  On the lush lawn surrounding the fair tent one could see Allyson Vieira’s clusters of paper spread out across the grass.  Inside the fair, Frieze had invited Pia Camil to drape visitors in lushly colored fabrics, sending them out across the aisles of the fair.  In a similarly inviting exhibit, Korakri Arunanondchai had spread a series of luxury massage chairs throughout the exhibition space, covered in his signature denim and blasts of primary colored paint.  Samara Golden also reprised her mirrored installation work on the outside of the fair, leaving a small hole beneath the space where viewers could peer in, and see a set of stuffed mannequins mounted on the ceiling and reflected up from a glass on the floor, creating a tunneling effect that gradually wore away at the perception of time and space.

With the first week of excellent summer weather, Frieze will continue through Saturday. 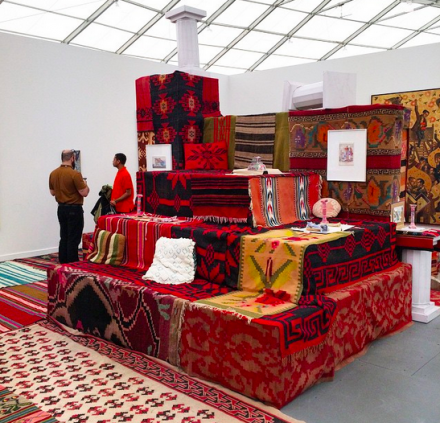 Andreas Angelidakis at The Breeder, via Art Observed 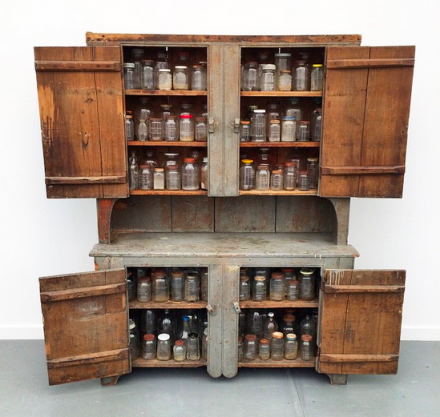 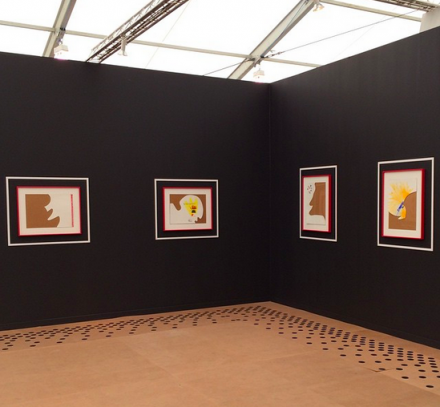 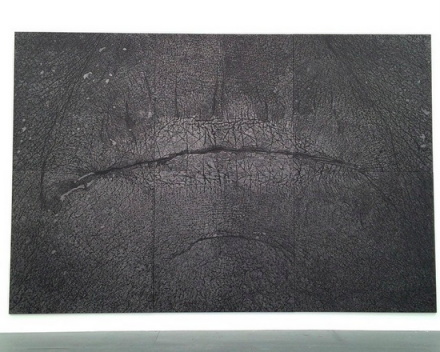 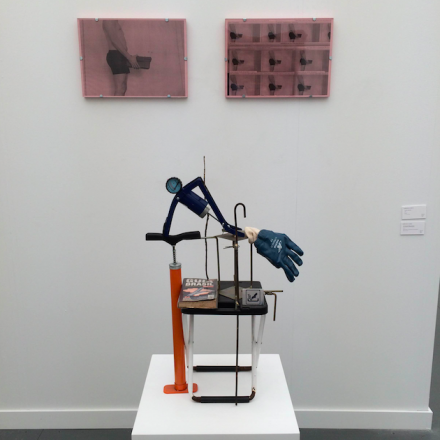 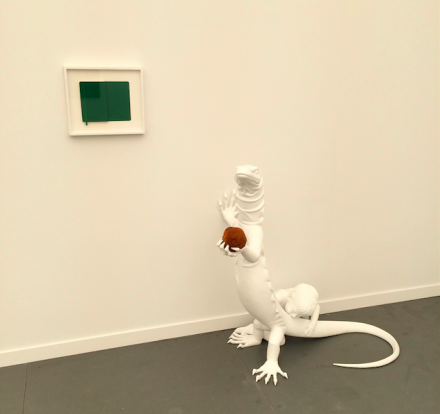 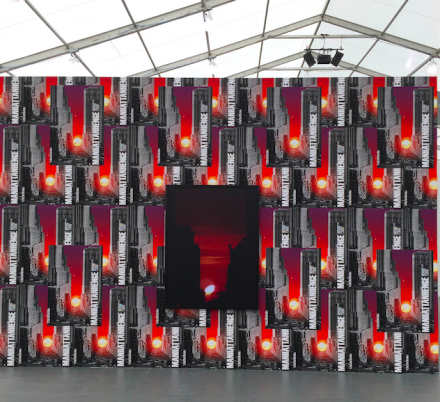 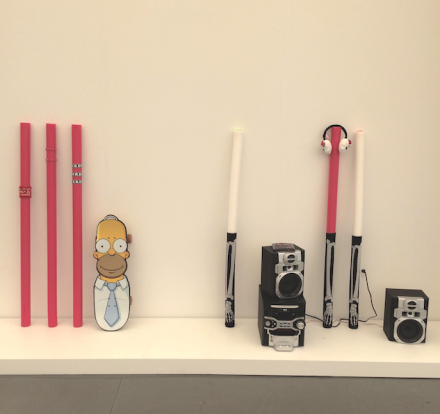 This entry was posted on Saturday, May 16th, 2015 at 11:14 am and is filed under Art Fair, Art News, Featured Post, Show. You can follow any responses to this entry through the RSS 2.0 feed. You can leave a response, or trackback from your own site.