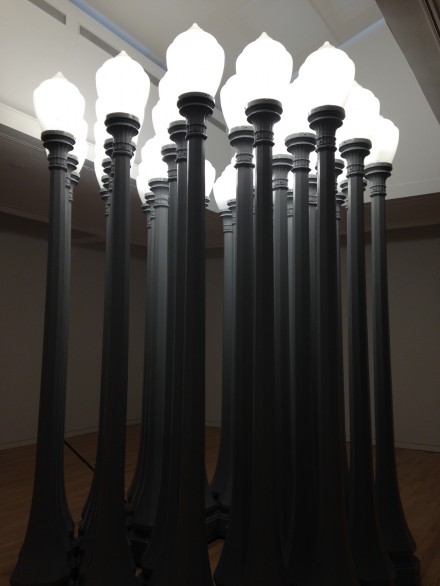 Chris Burden, Buddha’s Fingers (2014-15), all images via Osman Can Yerebakan for Art Observed

Spanning two uptown locations of Gagosian Gallery is a series of recent works by the late artist Chris Burden, who passed away last year at age of sixty-nine soon after his large scale New Museum retrospective. Burden, who started his career with avant-garde performances that played a significant role in furthering body art on a global scale, alongside his other American peers Vito Acconci and Bruce Nauman, then shifted towards idea-based practice later in his career.  Challenging in terms of execution rather than physical fortitude, these projects Burden undertook emphasized a concretized, material practice. 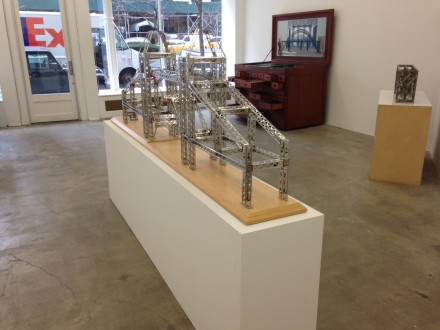 Bridges, on view at Park & 75, Gagosian Gallery’s smaller-scale project space on Park Avenue, demonstrates such inclinations of the artist’s late practice, where he embarked on ambitious projects to realize an unconsummated, 19th Century sketch for an iron bridge.  Completed in 1997, Burden’s version, which was designed to bear a 500-pound weight, is on view in this exhibition alongside photographic documentation of its lifting capacity.  Combining Meracco and Erector brand toy construction sets, this structure determined the beginning of a long-term artistic path for Burden, who created a series of these miniature bridges that blur the line between art and artifact, concept and utility. 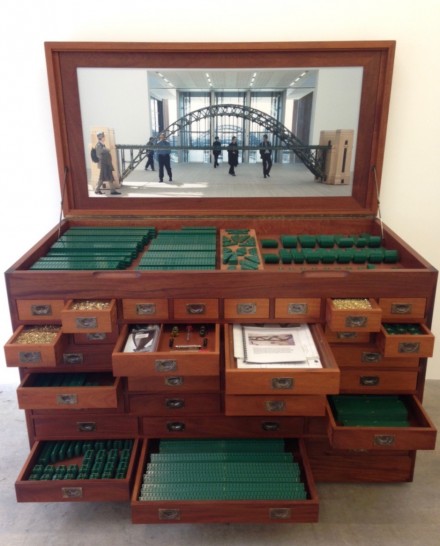 As a genuine enfant terrible and provocateur, Burden scrutinized values dictated by the media and establishments, especially in the 70’s, while the world was becoming numb to the violence of the Vietnam War, and through the depiction of violence by the mainstream media. Burden, however, shook the public with his guerrilla performances, Shoot (1971) being the most famous.  Buddha’s Fingers, on view at Gagosian Gallery, thus may seem arbitrary with its grandiose stateliness and clean-cut formation. 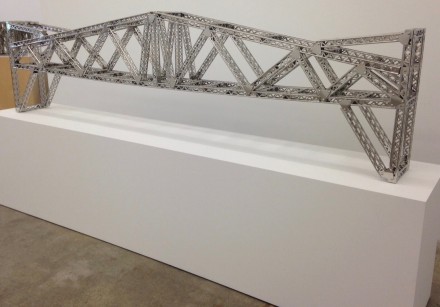 Yet similar to his bridge structures, this installation is the fruit of an ongoing endeavor for Burden, who in 2000 took up collecting Los Angeles’s discarded cast-iron street lamps from the early 20th century.  Following Urban Light, which is on view at the entrance of LACMA with its two-hundred and two-lamp formation, this structure, featuring thirty-two tightly gathered lamps refers to the namesake fruit that is a common motif in classical Asian art as a symbol of endurance.  Physical proof of Burden’s decades long candid strive towards “making,” this gratifying icon also stands as a pillar for the late artist’s creative legacy. 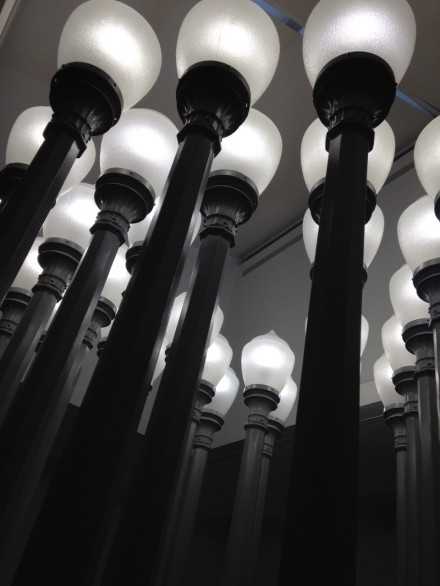 This entry was posted on Friday, February 19th, 2016 at 12:00 am and is filed under Art News, Featured Post, Show. You can follow any responses to this entry through the RSS 2.0 feed. You can leave a response, or trackback from your own site.