New York — Glenn Ligon: “What We Said The Last Time” and “We Need To Wake Up Cause That’s What Time It Is” at Luhring Augustine Through April 17th, 2016 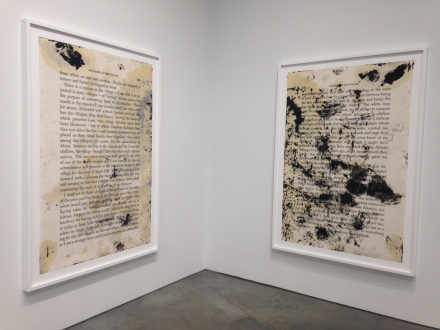 Glenn Ligon, What We Said The Last Time (Installation View), all images are by Osman Can Yerebakan for Art Observed.

Artist Glenn Ligon has embarked on an ambitious exhibition schedule this spring, showing at both New York locations for Luhring Augustine this month.  The show, which closes next week, runs through a range of Ligon’s body of work.   What We Said The Last Time is the Chelsea leg of a two part exhibition, and sees the influential multimedia artist commemorating the literary work of James Baldwin, whose writings had tremendous impact on many other authors and artists. 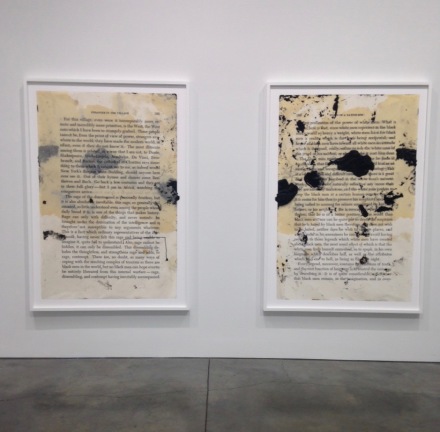 One of those whose practice is candidly compelled by the late author’s portrayal of racial politics, particularly in the United States, Ligon articulates his interests here on physically manipulated excerpts from Baldwin’s famous essay “Stranger in the Village”—a seminal text stemming from the author’s sojourn in a far-off Swiss village in 1953.

‘From any available evidence, no black man had ever set foot in this tiny Swiss village before I came in’ notes Baldwin beginning his essay on the burden of otherness in a world where skin color is a political matter. Transferring pages of his own copy onto large scale prints, Ligon diverges from his previous Baldwin-inspired body of work in which impressions of the author’s words had remained metaphorical. 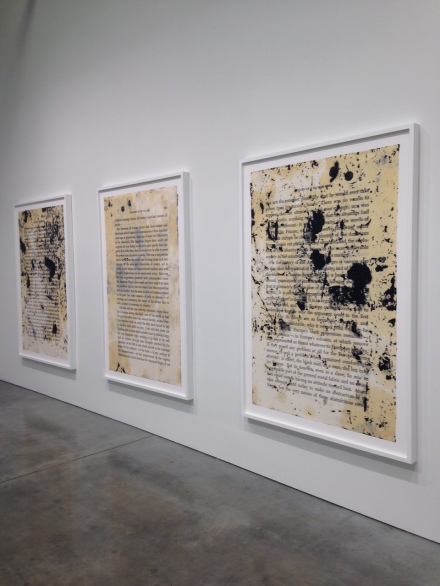 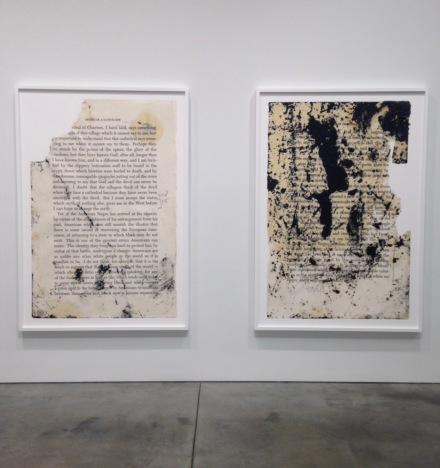 In this series, however, Ligon encapsulates his long time relationship with the essay at an intimate level, exposing stained, smudged and worn pages of his copy that he returned to over and over again in his studio.  Sporadically covering some of Baldwin’s poignant words throughout the text, marks emerge on pages akin to wrinkles on an aging face, unfolding remnants of artistic contemplation and the resistance of words, or the artist’s memory, against time. 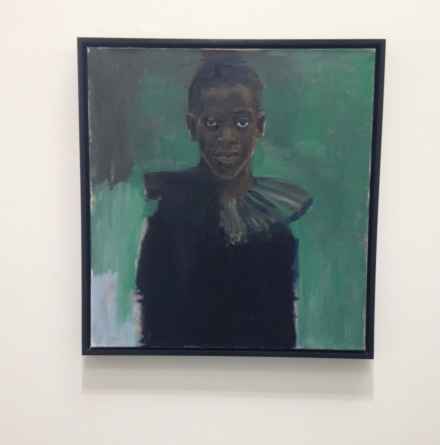 Accompanying the exhibition on view is Entanglements, a modest scale exhibition in which Ligon brings together works that emerged from artists’ observations of social and political occurrences from their studios. Bruce Nauman, Felix Gonzalez-Torres, David Hammons, Andy Warhol and Ligon himself are among these artists whose studio practice evolved in response to what was taking place in the social sphere that surrounds them. 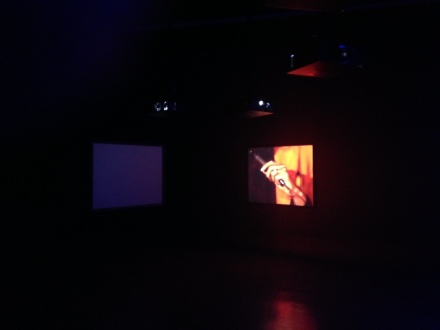 On view at Luhring Augustine’s Bushwick location is We Need To Wake Up Cause That’s What Time It Is, featuring a seven channel video installation and one text-based canvas awaiting visitors at the entrance.  In Live, Ligon dissects the 1982 film Richard Pryor: Live on the Sunset Strip, in which stand up comedian Richard Pryor delivers his remarks on embedded force within societal dynamics through his unique brand of sarcasm.  While one channel runs Pryor in full, each of the remaining six screens  focus on a single part of Pryor’s body throughout his performance, elevating various components of his highly gestural stage presence.  The installation excludes the comedian’s verbal presence, emphasizing the imposed separation between body and voice in racial politics.  This earnest work of art is potent in its affirmation of speech as a political act, and its systematic blockage as a mode of demoting black identity.

Glenn Ligon: What We Said The Last Time and We Need To Wake Up Cause That’s What Time It Is are on view at Luhring Augustine through April 17, 2016. 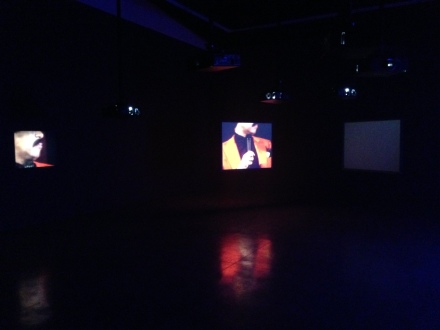 This entry was posted on Thursday, April 14th, 2016 at 12:14 am and is filed under Art News, Featured Post, Show. You can follow any responses to this entry through the RSS 2.0 feed. You can leave a response, or trackback from your own site.