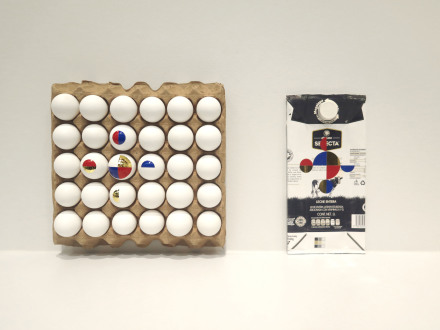 Gabriel Orozco’s new solo presentation takes place in Galeria Kurimanzutto, in San Miguel Chapultepec, Mexico DF. The show, which opened last month in conjunction with Zona Maco 2017, sees Orozco exploring a unique two-part exhibition that draws attention to Mexico’s core contemporary culture embedded in the everyday: its Oxxo tiendas, with their cheap consumer goods massively distributed across the country. These retail stores satisfy the daily needs of millions of Mexicans with sodas, snacks, cigarettes, toilet paper, shampoo, condoms, etc… Over the past 40 years, the Oxxo chain, subsidiary of the multinational multi-billion dollar company Femsa, has expanded to over 14,000 locations. 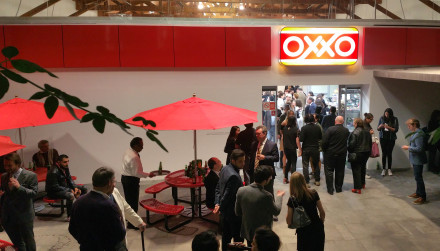 For this show, Orozco opened a temporary Oxxo at Kurimanzutto, set up like any other convenient store.  It features vibrant promotional signs, metal shelves full of lush expendables, several refrigerators, and a self-service coffee outpost, as well as a long cashier counter adorned with rows of snacks and an oversized “¡ya abrimos!” (we’re already open!) sign. However, among the 3,000 different products on display, 300 of them serve as “samples” announcing the second part of the exhibition. Scattered in situ around the Oxxo, selected iconic packaging are enhanced with Gabriel Orozco’s most recognizable “logo”: a diagram of red, blue and gold circles. 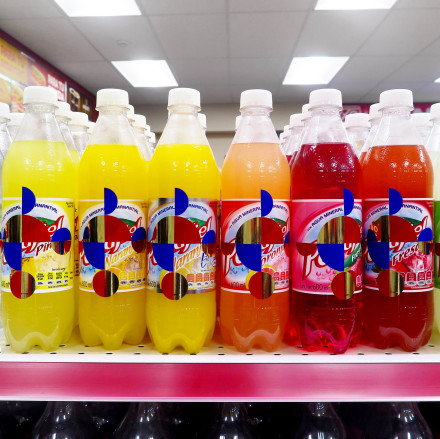 At the entrance of the gallery, a fictitious currency is distributed: a printed banknote composed of half an American dollar and half a Mexican peso, with Orozco’s red, yellow & blue half circles at its center. Anyone with a facsimile ‘Oroxxo banknote’ can acquire a regular coke or a packet of donuts. These symbolic transactions, where the produce is real but the money is fake, invite the viewer to question the value of objects, and more specifically, the value of art. The money is real within this gallery context, yet the value of the art object is very much abstracted, relying mostly on factors independent from the artwork itself; the unbalance between supply and demand, the artist’s career and recognition, and, perhaps the most notable subtext of this show, the artist’s own brand-value. 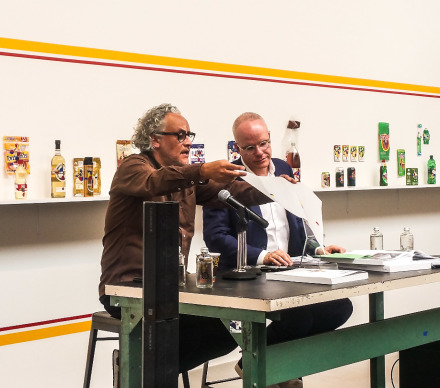 Gabriel Orozco and Hans Ulrich Obrist for the launch of Cahiers d’art, Kurimanzutto, 2017, via Art Observed 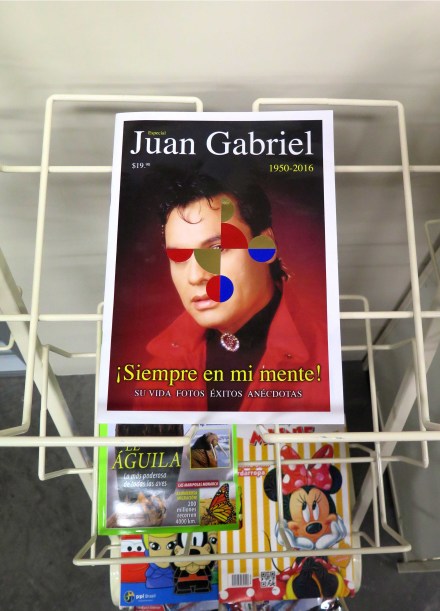 Orozco indeed imagined a system here in which the application of circular stickers on everyday products can stress both their meaning and value. The geometry and technique the artist uses are recurring in his practice, as he first included a similar adornment on a page of one of his early books edited by Hans Ulrich Obrist.  In recent years, Orozco has created casual compositions with stickers on his friends’ iPhones cases.  The use of stickers was also intensified in the Roto Shaku series (2014), which resulted in a unique overlapping of colored Japanese tape wrapped around wooden poles. Furthermore in the glass labyrinth Blind Signs (2013), black decal discs are stuck on the transparent panels following specific rules of symmetry, expanding the circular motifs into a third dimension.  In the case of today’s Oroxxo, the circular form is ironically reduced to a recognizable branding sign, simplified to its most efficient & marketing-driven iteration. 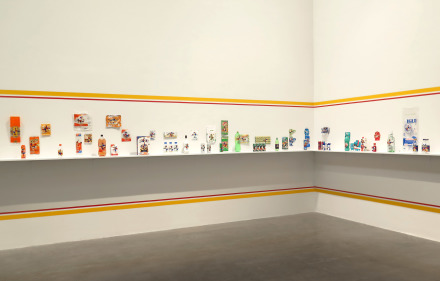 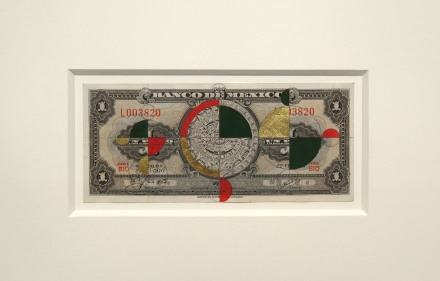 On the other hand, the printed banknotes recall the artist’s Mexican Pesos series, delicate pieces on which Orozco composes red, green and gold leaf circles fragmented in halves and quarters atop historical “One peso” bills, following the movement of the knight in a game of chess. By applying these circles to actual money, Gabriel Orozco generates a new patent currency nodding here to Mexico’s national flag while increasing the value of a peso by over 25,000 %. A similar phenomenon occurs in Oroxxo, but with the artist taking the game of economics to the next level, playing with the fluctuation of demand and supply to determine his prices. 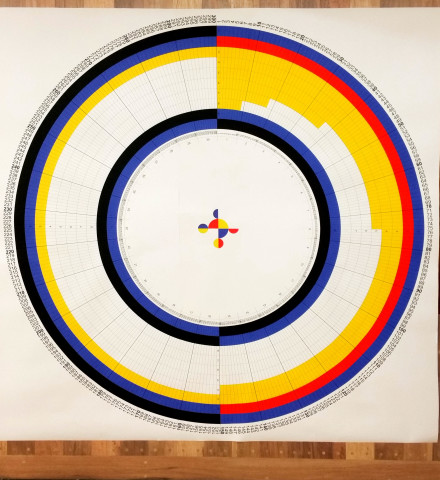 This exhibition is indeed about numbers and figures. For instance the use of a circular chart is interesting from a finance point a view as it uses time as a factor to keep track with sales, price surge and decrease. Each transformed product enhanced with the circular motif comes in a limited edition of 10. The edition 1/10 is on view in the adjacent room and consists of the artist’s 300 prototypes.  As such, they are the most valuable and are worth $30,000 each. The prices however decrease by half at each edition: edition 2/10: $15,000 ; edition 3/10: $7,500 ; edition 4/10: $3,750, etc.. and drop as low as $60 for the edition 10/10, which are in fact the samples on view in the gallery’s Oxxo shop. The multiples are only produced once they are acquired: the collector thus generates both the artwork and the size of the edition, indicating a very open, subjective, unpredictable, and novel market place, at the intersection of pristine art market and mass distribution. 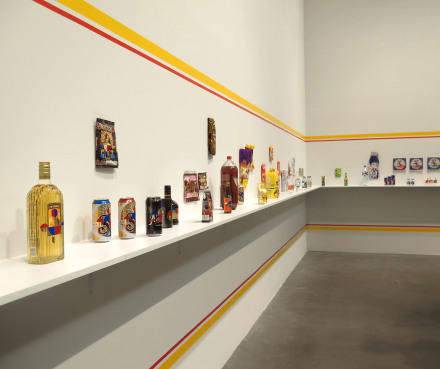 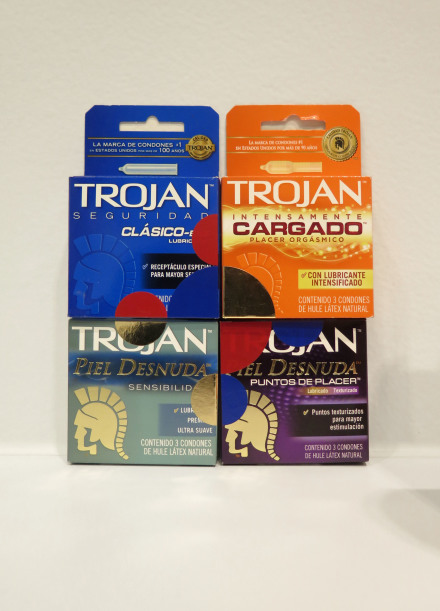 The prices only drop exponentially as the editions sell, encouraging on the one hand wealthy collectors to buy the whole vertical set, from edition 2/10 to 10/10, the sum of which adds up to $30,000, while on the other hand, offering accessibility to new comers and more modest art enthusiasts who would be excited to collect from a world recognized artist. This performative act will indeed reach its peak on the last day of the exhibition on March 16. 2017, where the samples on display in the Oxxo will be available for purchase at $60. 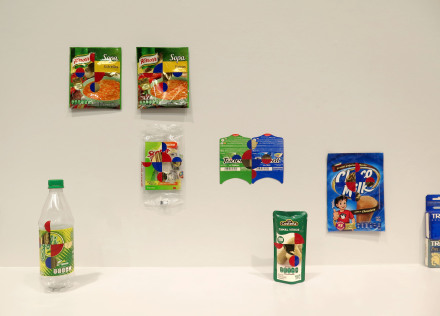 While there is an undeniable playfulness in the process, Orozco nevertheless engages with artistic fundamentals such as composition, balance, color, scale and texture. These are particularly striking in the second part of the exhibition which presents the 300 prototypes framed by red & yellow lines in the gallery’s 360° white cube. The altered products are isolated and staged in groups arranged by color combination, allowing fortuitous dialogs to unfold from the mundane. These objects, commonly consumed and disregarded, gain here, under Orozco’s manipulations, emphasis to the variety of their aesthetic qualities, and in this context, ultimately become art works. While the history of ready-made and pop art has many similar examples to offer, we are able to witness and be conscious of such transformation through a journey of initiation, in walking through the Oxxo as if it were the first time, and preparing ourselves to perceive our surroundings with the “eyes of a beginner”, with this sense of openness. 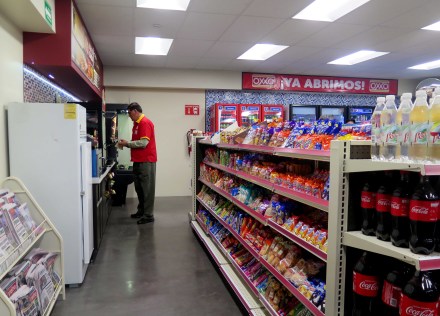 Finally, there is an interrelation between repetition and disappearance at play. In the context of the art gallery, both logos (the product’s recognizable branding and Orozco’s infamous symbol) unite and complement themselves. Approaching mass distribution by using the same visual vocabulary enables Orozco to completely blur the boundaries between art and the everyday. The exhibition is a celebration of what contemporary Mexico looks like, feels like, tastes like, far away from the folklore, and deeply embedded in the real world, full of defaults and accidents.  The ‘Oroxxo’ is an irreverent reflection of our time, which joins elite & trivial, encompassing two sides of the same coin, one that ultimately defines both our contemporary consumer society, and one of our most explicit relationships to it. 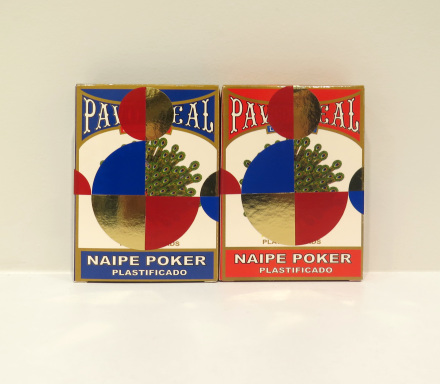 This entry was posted on Wednesday, March 15th, 2017 at 11:25 pm and is filed under AO On Site, Art News, Featured Post. You can follow any responses to this entry through the RSS 2.0 feed. You can leave a response, or trackback from your own site.