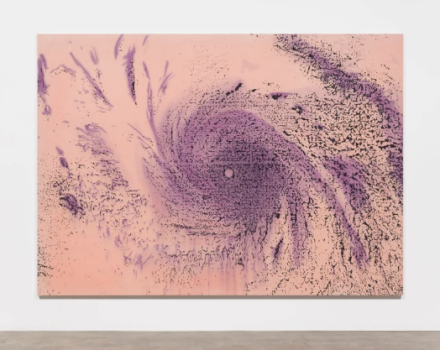 As another year in the art world draws to a close, global attention turns to the southern tip of the U.S. for another year of Art Week Miami, the sprawling multi-fair spectacle that each year flood both Miami Beach and Miami proper with waves of art lovers, artists, collectors and revelers for a range of installations and exhibitions, not to mention the infamous schedule of parties and events surrounding the week. 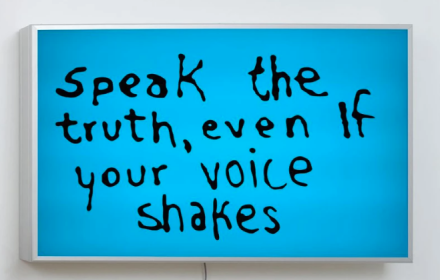 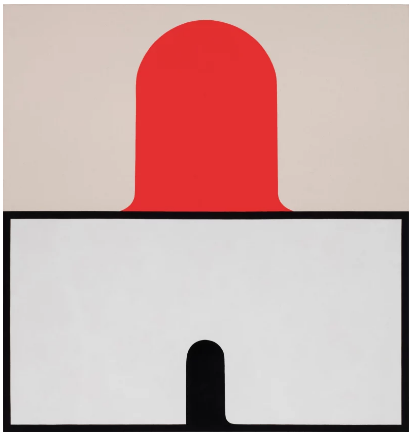 At the center of the week is Art Basel Miami Beach, the massively sprawling contemporary art fair that returns to its home at the Miami Beach Convention Center, bringing with it a world-class collection of galleries that has long made it one of the centerpieces of the year’s art calendar. The fair’s mix of blue-chip galleries and dynamic young exhibitors continues this year. Marianne Boesky will bring a compelling gallery exhibition, including works by Julia Dault, Sanford Biggers and the late Maria Lai, while at Tanya Bonakdar Gallery, look for a range of works by Ernesto Neto, Olafur Eliasson and Mark Manders. Mexico City’s kurimanzutto will bring a body of works by Jimmie Durham, Nairy Baghramian, and others, also flexing its impressive roster. 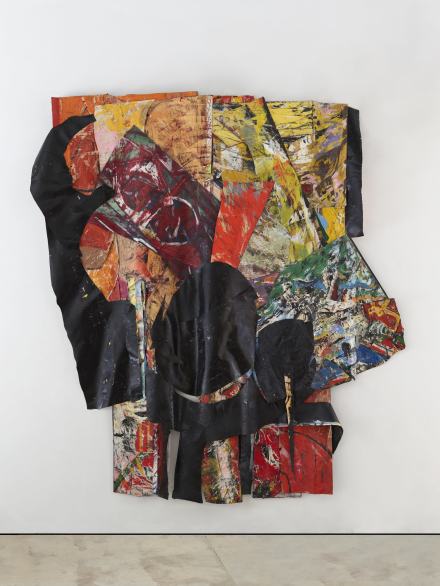 Angel Otero, At Five in the Afternoon (2017), via Lehmann Maupin 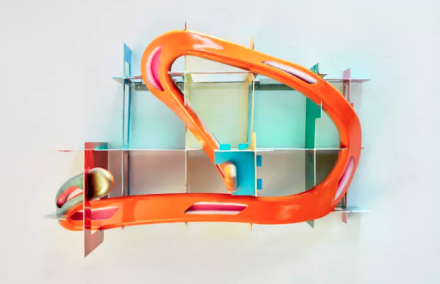 Look for artist Sam Durant to reprise his massive statement works from last year at Blum & Poe, bringing another massive lightbox work speaking to the fraught political climate of the U.S., while Nate Lowman’s images of recent hurricane patterns will make quite a splash in a city buffeted yearly by tropical storms and category fives. 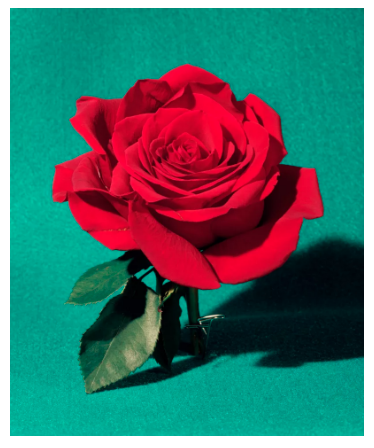 Alongside the fair’s main offerings, its curated sections will also return, bringing a range of perspectives to an already burgeoning roster.  In the Nova section, which spotlights works made in the past two to three years, Essex Street will bring a series of works by younger artists, including Torey Thornton (the artist’s massive sawblade works will be familiar to attendees of this year’s Whitney Biennial) and Chadick Rantanen, while Foxy Production will bring a series of images heavy on optical tricks and surrealism, particularly from Sarah Cwynar and Sascha Braunig. Meanwhile, its Positions section will offer a spotlight on young artists and galleries, including pieces by Xu Qu at Antenna Space, and Callicoon Fine Arts, where a range of works by A.K. Burns will be on view. 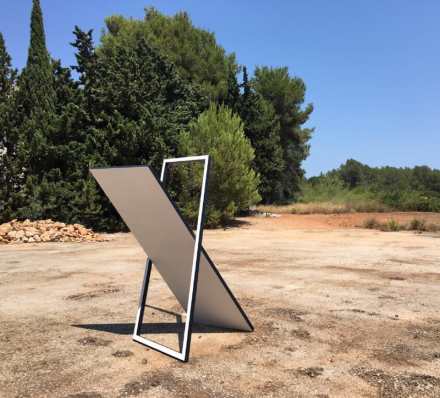 Philippe Decrauzat, Shut and Open at the Same Time (2016), via Parra Romero 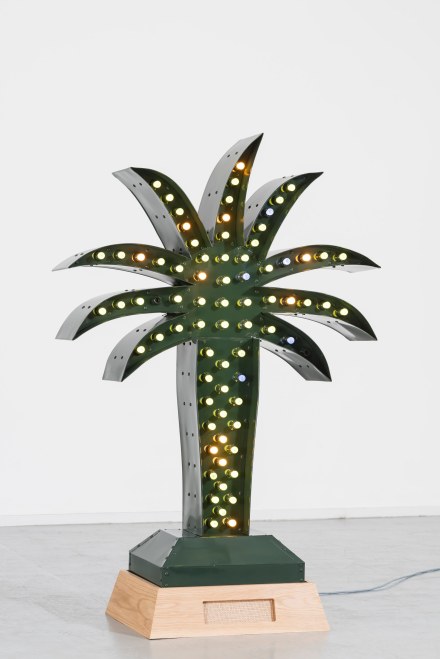 The far also returns its popular Public section, featuring a range of public installations and sculptures spread along the lawns of Collins Park, just north of the Convention Center, and bordering the Bass Museum.  Of particular note this year is work by French artist Cyprien Gaillard, which will complement pieces by Yto Barrada and Abraham Cruzvillegas. 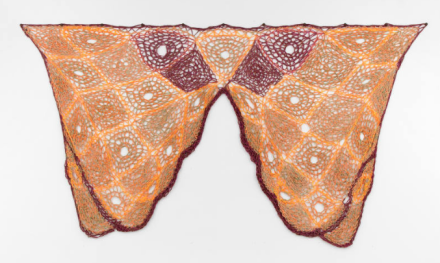 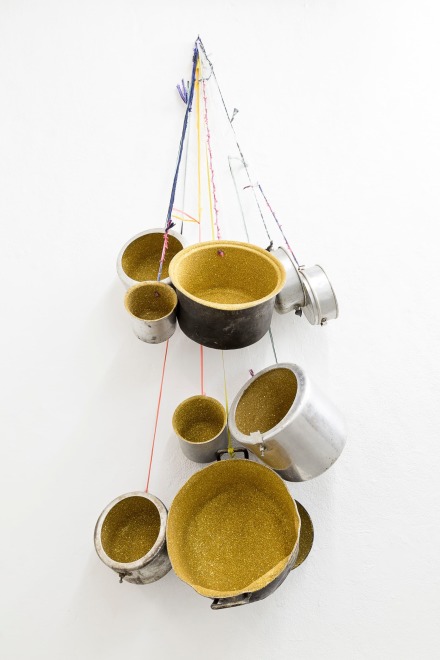 Long held as one of the essential stops for smaller galleries and more rigorous, adventurous new works, the New Art Dealers Alliance will open its doors in Miami proper this year.  With its longtime headquarters at the Deauville sidelined after the storms earlier this fall, NADA will truck its operation over the Ice Palace Studios, just a few blocks inland from the Arsht performing arts center and the Perez Museum.  Despite the new home-base, one can expect the communal atmosphere and small-scope of the fair to make visitors immediately feel at home. 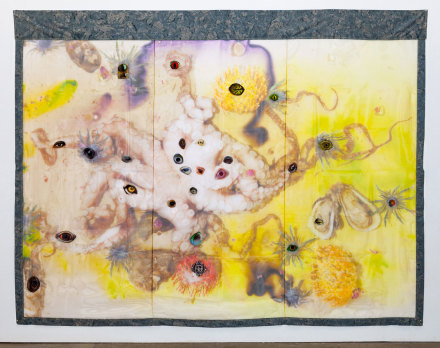 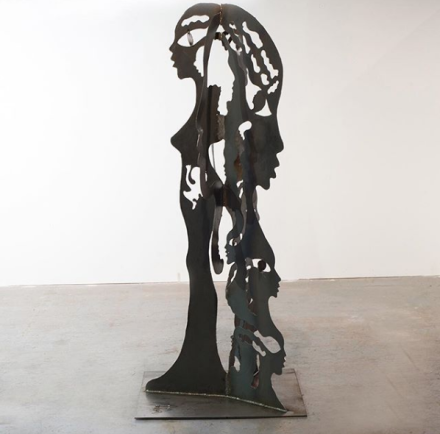 Lonnie Holley, From the Beginning (2017), via James Fuentes

Highlights this year include a body of works by Lonnie Holley on view at James Fuentes, and an imaginative group show of figurative works on view at Cooper Cole.  Also of note will be a running project by artists Josh Brand and Trevor Shimizu, with the pair photographing fair attendees over the course of the week, posing in front of the work of their choice.  The fair also features a range of talks and performances, including a chat with Miami-based artist Loni Johnson, and a new performance by Czech artist Jiri Kovanda. 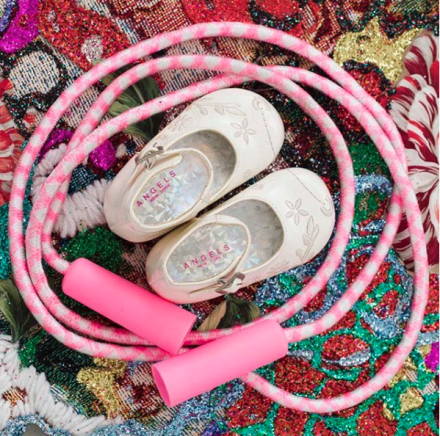 Also of note is the return of the annual UNTITLED Fair, which has expanded in recent years on the strength of its curatorship-first vision and strong group of galleries. The fair returns to its beautiful beach side location on Ocean Avenue this year, and to its invite-only curatorial structure, bringing a body of galleries that speak to its commitment to tightly-organized production and exceptionally strong work.  Asya Geisberg will have an interesting booth this year, with striking compositions by Matthew Craven alongside a series of assemblages by artist Trish Tillman.   Also of note is New York gallery Signal, which moves over from its usual haunt at NADA for a show of works by artist Meriem Benani, translating the artist’s Fardarous Funjab project as “larger than life” according to the gallery.  The Hole will also be on hand, presenting works by Eric Yahnker, and will also host a Performance/ Installation by Tara Subkoff called Synaptic Fatigue / Dear in the Headlights at the Miami Beach EDITION on Tuesday night. 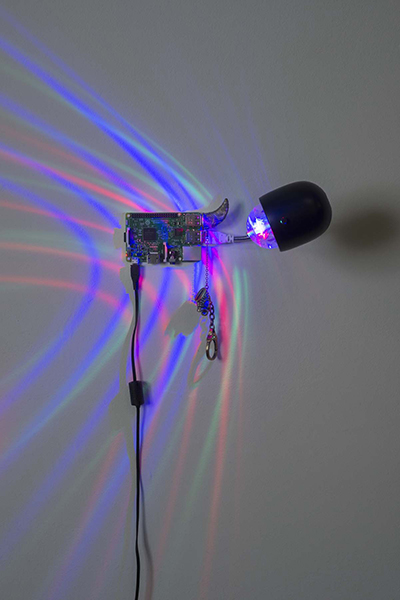 The rest of the city will also be dotted with installations and projects, with countless pop-ups and events spread along the beach and in Miami Beach itself. On the beach outside the recently completed Faena hotel, a swarm of flying drones engineered by Amsterdam-based duo Studio Drift and presented by PACE will perform a coordinated show on the evening of December 6th, continuing the duo’s impressive approach to installation and technology-driven works.  At the Nautilus Hotel, an installation by the late Rene Ricard will open at its swimming pool, featuring one of his works spread along its bottom, while inside one can view a series of works by Paul Sevigny.  The hotel also returns its annual residency from New York nightclub Up&Down. 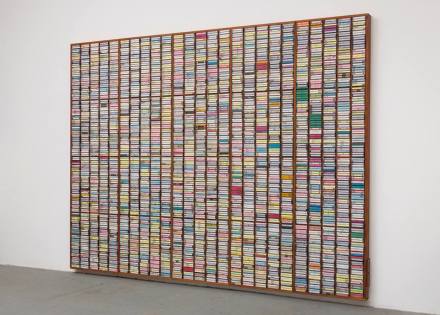 Mark A. Rodriguez at Park View, via Park View

The Tuesday before ABMB kicks off, the city of Miami’s Design District will take its own turn on flexing its art world muscle for the early days of Art Week, with a string of high-profile openings set to take place in the city.  Chief among these is the opening of the Institute of Contemporary Art Miami’s celebration of its new permanent space, which opens its doors on a show of works exploring the importance of the artist’s studio in the production of their work, drawing on a range of artists and historical threads. Just a few blocks away, Jeffrey Deitch and Larry Gagosian will also open their collaborative program for the third year running, a curated show that’s quickly becoming an annual highlight of the week.  This year, the pair’s show is titled ABSTRACT / NOT ABSTRACT, and culls work from John Armleder, Urs Fischer, Jeff Koons, and Elizabeth Neel, among many more, in an exploration of the limits and language of modern abstraction.

For those looking to move a bit off the beaten path, Locust Projects will also be open, with a show of works by Nancy Davidson just around the corner, a series of bizarre weather balloon sculptures. The Perez Musuem will also get in on the festivities this year, presenting a range of works from its collection, alongside its annual Thursday night party with DJ Maseo of famed Hip-hop crew De La Soul headlining. Celebrating its reopening after major renovations, the Bass Museum in Miami Beach will open its show of works by Mika Rottenberg to accompany its shows of Ugo Rondinone and Pascale Marthine Tayou.  At the Rubell Collection, one can view a series of works examining how technology has changed the human condition, presenting pieces by Ed Atkins, Anicka Yi and others.  A show by artist-in-residence, Allison Zuckerman, will also be on view. 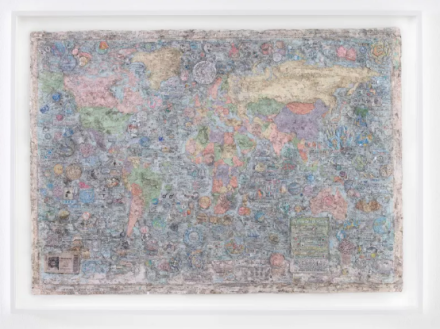 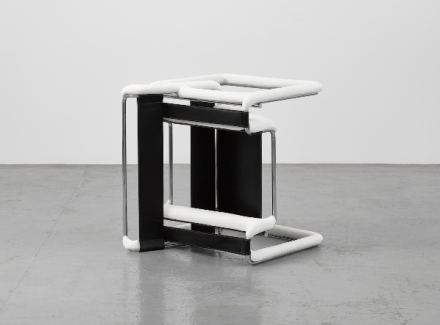 Ryan Gander, A toppled Breuer chair after a blizzard of snow (2017), via Lisson

And of course, Miami Beach Art Week would be lacking without an ambitious nightlife calendar, as countless promoters and brands descend on the beachfront hotels and properties snaking down Collins Ave.  As always, the after-party for Aby Rosen’s annual Friday dinner remains one of the hottest tickets (and toughest doors) of the week, with an unannounced location and celebrity guest list that once again ensures its place as one of the nightlife centerpieces of the Art Basel festivities. Designer Virgil Abloh will also host a party this year at Basement Miami, the underground nightclub of the Miami Beach EDITION Hotel, while Jeremy Scott’s annual party will take place Thursday night at the Nautilus Hotel.  Bjork will be in Miami this year as well, celebrating the release of her new record Utopia with a DJ set at Mana Wynwood on Tuesday, closing out the string of openings and parties that night in the neighborhood.  Promotor III Points is presenting a series of parties and shows at the venue that week, including a rare Wu-Tang Clan appearance that Saturday, December 9th.  Art Week stragglers hanging on until Monday will have the chance to catch New York party crew TIKI DISCO spin at the Standard for the hotel’s annual “Lazy Sunday BBQ.”

With countless exhibitions and projects around the city, Art Basel Miami Beach’s draw seems no less diminished this year, and should offer an opportunity for the art world to put its feet up beachside.  That is, once the the fairs close and the works are sold. 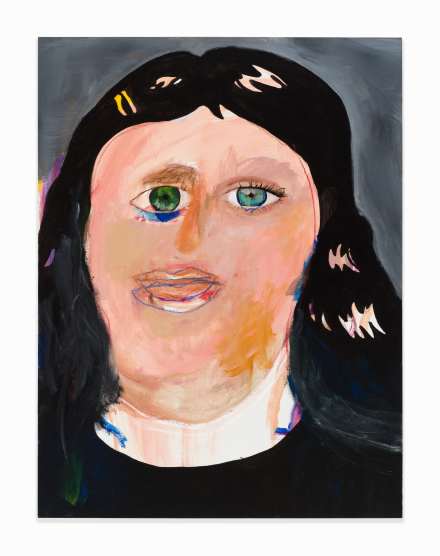 Margot Bergman, Not yet titled (2017), via Corbett vs Dempsey 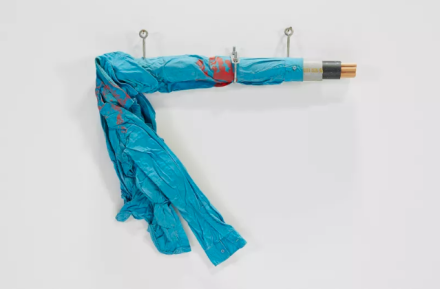 Jimmie Durham, Its My Shirt (1993), via Kurimanzutto 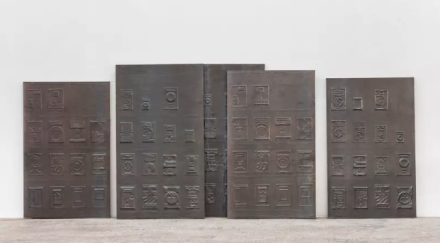 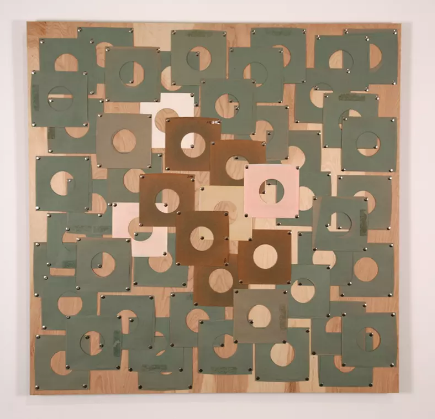 This entry was posted on Monday, December 4th, 2017 at 11:26 pm and is filed under Art News, Featured Post, Show. You can follow any responses to this entry through the RSS 2.0 feed. You can leave a response, or trackback from your own site.