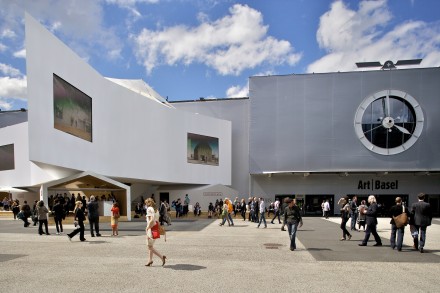 The city of Basel, situated at the border between Switzerland, France and Germany, will be transformed into a contemporary arts hub this week for the 44th annual Art Basel. Anticipating record attendence, the fair will look to top its record of over 65,000 visitors at the marathon art event this year.  With over 300 top galleries from all over the world flocking to the city to display over 4,000 artists’ work, the fair is commonly referred to as the “Olympics of the art world.”  and features a similarly brimming schedule of events and claustrophobic crowds of eager spectators. Each day boasts its own full agenda, including film screenings, artist talks, and performances, and joined by the vast number of peripheral art exhibitions and events hosted by cultural institutions of Basel throughout the entire region, held in obscure and romantic venues amidst the Swiss lakes and mountains. 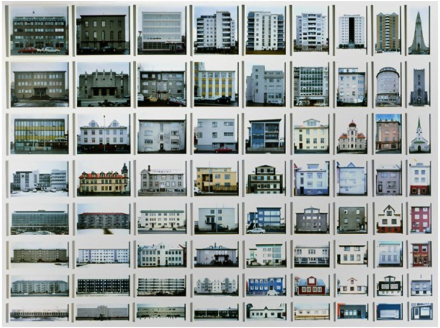 The Art Basel is separated into eight different sectors this year, allowing visitors to explore the broad selection of art on view: Galleries, Feature, Statements, Edition, Unlimited, Parcours, Film and Magazines. Arguably the most important sector, Galleries hosts 238 of the world’s most prominent Modern and Contemporary art galleries including works by Henry Moore, Jeff Koons, Ai Weiwei, Gary Hume and Lucien Freud among the lengthy list of names. 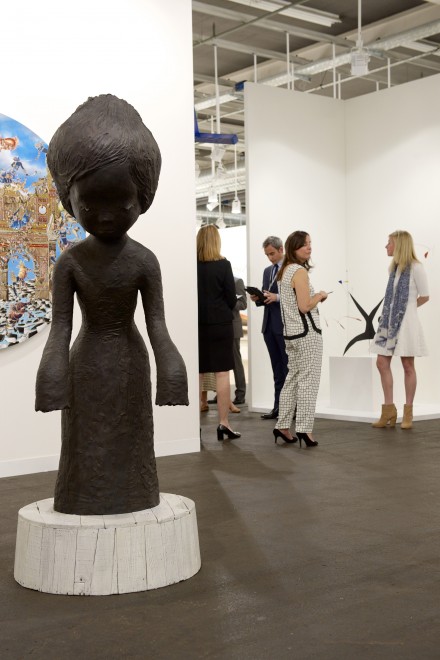 The Statements sector this year is devoted to innovative solo projects by a new generation of artists, bringing new voices to the international art world. Each year, two exceptional artists from the sector are awarded the Baloise Art Prize, a distinguished award that enters the winners’ works into the Baloise Group collection, donated to the Museum Moderner kunst Siftung Ludwig in Vienna and the Hamburger Kunsthall. Last year’s winners were installation artist Simon Denny and sculptor Karsten Foedinger. 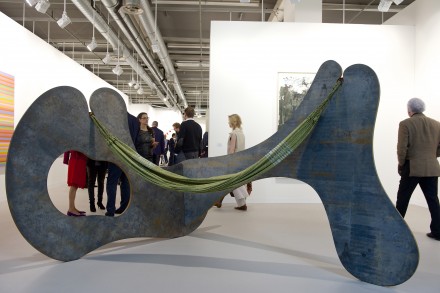 The Features sector exhibits curatorial projects of 24 galleries from 16 countries, running the gamut from solo presentations to thematic projects addressing questions of culture, history and artistic ethos. The Edition sector holds the works, prints and multiples produced through collaborations between leading publishers and renowned artists, and the Magazine sector welcomes international art publications to contribute their magazines to one collective booth. The Magazines and Statements sectors, as well as the talk’s auditorium, will be relocated this year to the new extension of Hall 1, which was designed by Basel architects Herzog & de Meuron. 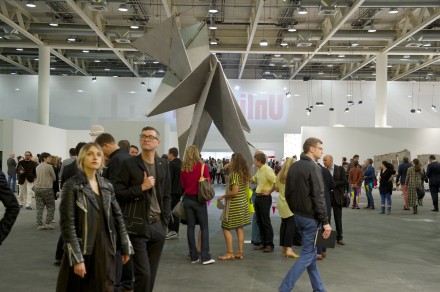 Unlimited, perhaps the fair’s most anticipated event each year, is Art Basel’s exhibition platform for works that surpass the traditional limitations of art shows. Among the pioneering pieces are out-sized sculptures and paintings, large-scale installations, performance art pieces and video works. This year the sector will exhibit 79 artworks, including pieces by Antony Gormley, Oscar Murillo and Susan Hiller. Highlights of the sector will include the largest painting ever exhibited at the Art Basel: Two into One becomes Three (2011) by Matt Mullican, which measures 22 by seven meters. Gavin Brown’s Enterprise and Hauser & Wirth will also present the immediately recognizable work by Martin Creed, which will send runners sprinting as fast as they can through the exhibition hall. The sector is being curated, for the second consecutive year, by Gianni Jetzer, a New York-based curator and critic who has curated myriad exhibitions during his times as curator at Migros Museum in Zurich, and holds the positions of Director of Kunsthalle St. Gallen, and Director of Swiss Institute in New York. 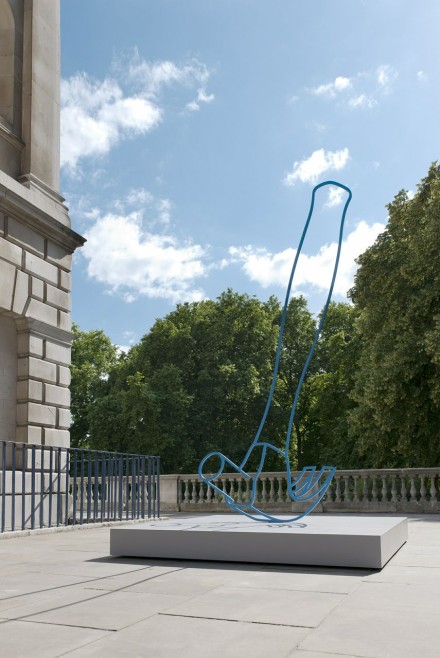 Parcours, Art Basel’s section that directly engages with the city of Basel through site-specific installations and performances, also returns this year with a series of works hosted in Basel’s Klingental neighborhood, an area steeped in historic buildings, cultural establishments and bordered by the red light district.  Florence Derieux, the Director of FRAC Champagne-Ardenn, is curating the program for the first time, and has selected a restaging of Marina Abramovic’s The Airport (1972) presented by Lisson Gallery. The New Art Centre and Gagosian Gallery will also present Hammer (blue) (2011) by Michael Craig-Martin. The sector will open on Wednesday June 11th with a notable performance by the one-year-old L.A. Dance Project, performing a Merce Cunningham piece from 1964 called Winterbranch against a set designed by Robert Rauschenberg. 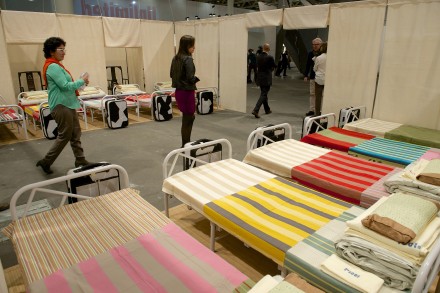 The Art Basel film program, spanning five-days, will feature over 30 films by and about artists, curated by Berlin film scholar Marc Glöde and Zurich collector This Brunner. Brunner has had more than 40 years of experience in the international film industry, and has been the Art Basel Film sector’s curator since 1992, as well as the Art Basel in Miami Beach Film curator since 2002. Glöde has curated the Art Basel Film program in Basel since 2008. He is a film historian and critic who has authored a plethora of publications as well as lectured at the free University of Berlin, the Dresden Art Academy, Columbia University, and currently at the ETH Zuric. Brunner chose Cutie and the Boxer by Zachary Heinzerling as the program’s feature film. The emotive film, which won the Directing Award at the Sundance Film Festival 2013, documents the lives of Japanese artist couple Ushio and Noriko Shinohara. 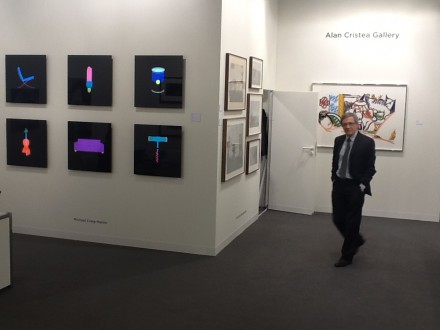 In addition to the aforementioned collections and presentations, there are countless conversations, salons and satellite exhibitions. The surrounding museums will be hosting world class exhibitions to coincide with the Art Basel. Foundation Beyeler, a 20-minute tram ride from the city, offers a retrospective of the work of Max Ernst alongside pieces by Rothko and Giacometti as well as a picturesque retreat into the Swiss countryside. What’s more, the often-overlooked Kunstmuseum Basel is hosting an exhibition of Ed Ruscha photography and Picasso paintings, among other works. The Vitra Design Museum is showing Louis Kahn – The Power of Architecture’, which marks the first retrospective on American architecture of the last two decades. 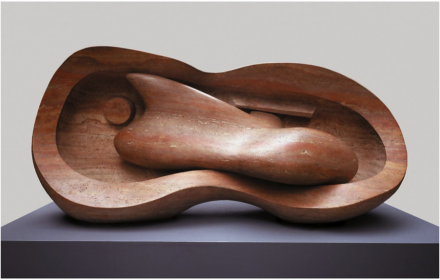 In total, the works on sale add up to over $2 billion in value, with raised sales expectations since to the $1.1 billion of sales during May’s contemporary auctions in New York. Among the most costly items, the Montreal-bases dealer Landau Fine Art presents the 1960 Rene Margritte surrealist canvas Un peu de l’ame des bandits priced at $12.5 million. Marlborough Fine Art, a London-based dealer, will exhibit a 7 feet wide Henry Moore red marble sculpture entitled Reclining Interior Oval with a price tag of approximately $10 million. Nevertheless, while the largest dealers are enjoying a monopoly on the art market, small dealers are suffering under a period of retrenchment, and will look to stand out in the yearly Basel crowds. 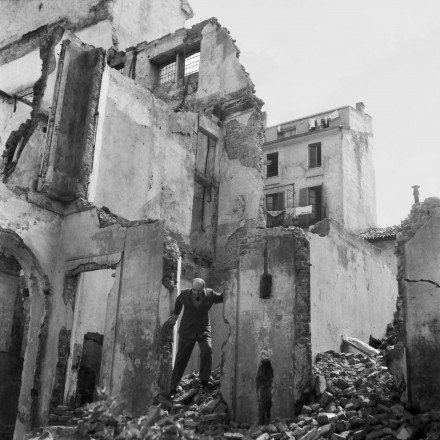 Alfredo Jaar, Lucio Fontana Visits His Studio on his return from Argentina (1948), via Art Basel 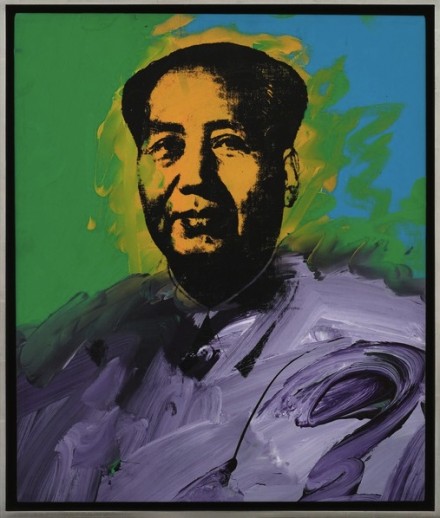 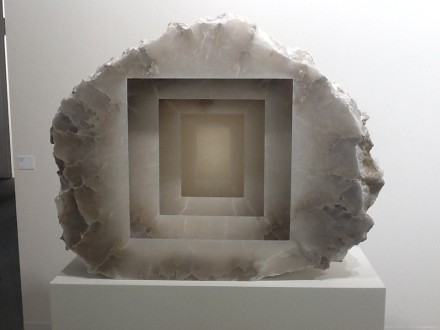 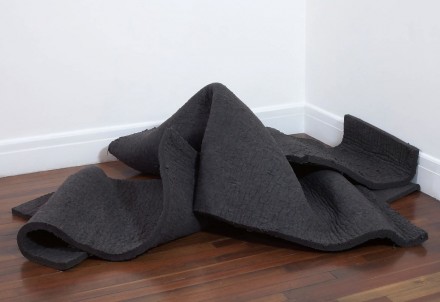 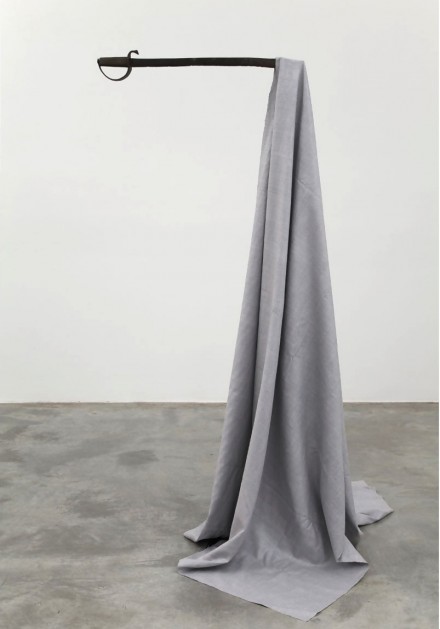 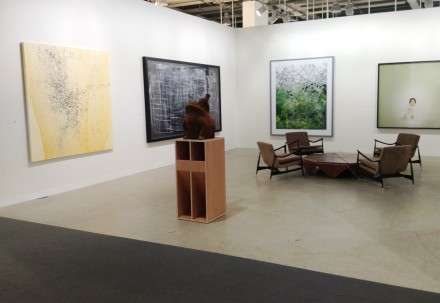 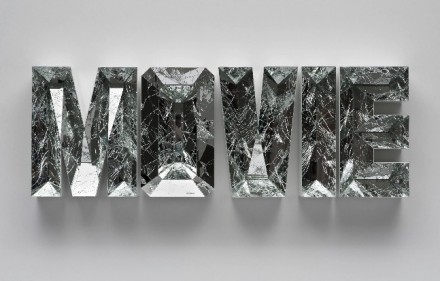 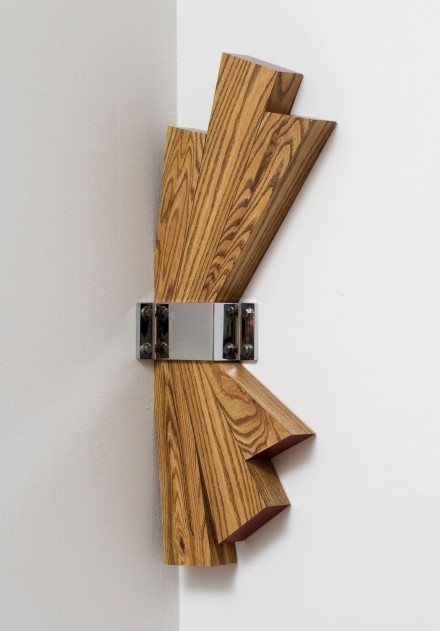 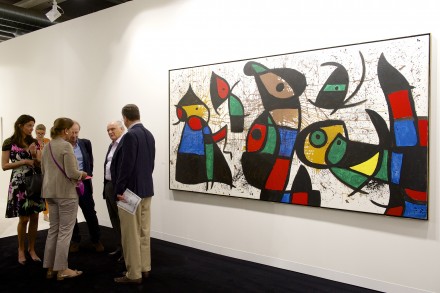 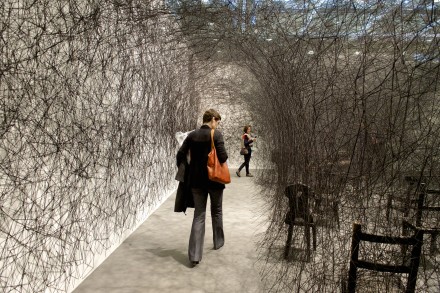 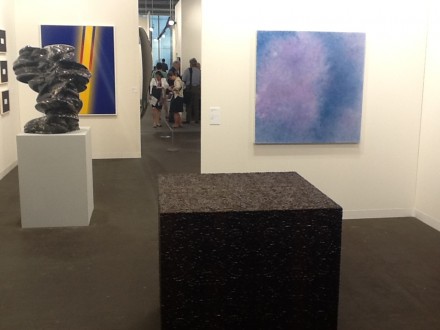 This entry was posted on Tuesday, June 11th, 2013 at 11:16 pm and is filed under Art News. You can follow any responses to this entry through the RSS 2.0 feed. You can leave a response, or trackback from your own site.