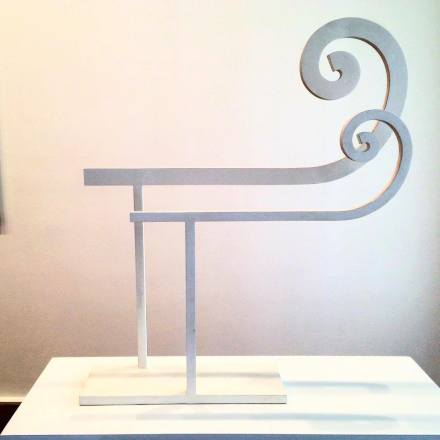 A central figure in the history of twentieth-century art, Fausto Melotti’s body of work is revered throughout Europe, with critical successes, major exhibitions, and awards all conferred on his ambitious and stylistically diverse oeuvre.  Yet the artist’s catalog has long eluded American viewers, a point that Hauser and Wirth is seeking to change as it takes over representation of his work worldwide.  First presented at the gallery’s ADAA Art Show booth, Melotti’s work is on view at the gallery’s 69th Street exhibition space, exploring a practice that spanned sculpture, painting, ceramic, low reliefs, and works on paper, evoking the artist’s craftsmanship and inclinations towards “weightlessness,” and exploring his desire for geometric balances beyond mere figuration.

The Italian sculptor, installation artist, and poet, admired for his unique contribution to the development of mid-century European, and especially Italian, Modernism, defies categorization in a single medium.  Long embracing experimentations with plaster, ceramics, and metal, Melotti’s delicate handling of resources, most present in his sculptures, reflects the elegance of his thought.  An avid writer, Melotti often explored concepts of sculpture through text as “a matter of drawing in space with wire, mesh and thin sheets of metal,” where “space became a sculptural material just as basic as solid matter.”  He writes further, in 1935: “Greek architecture, Piero della Francesca’s painting, Bach’s music, rationalist architecture — these are all ‘exact’ arts.” His interests mostly aspired to the same musical principles: rhythm, harmony, and ‘counterpoint’. 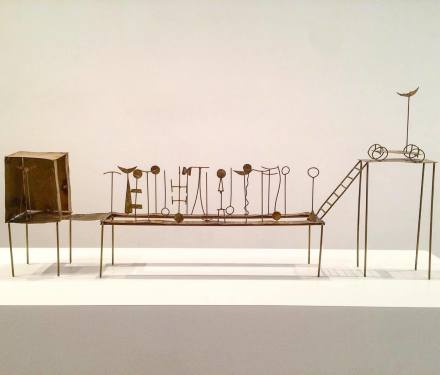 The artist’s daughter Marta Melotti described the pianist-turned-artist’s ritualistic involvement of music in his work, which would not begin without first flooding his workspace with music that would play throughout. “He even composed!” she exclaimed at the press preview.  Exercising the finesse of a bricoleur, these inclinations lent his work a wealth of stylistic variations that, in addition to ceramic and metal staples, introduced painted fabric, flower petals, wire mesh, mirrored surfaces, and even lengthy strips of cassette tape. Each artwork resonates with an innate rhythm: lines of brass and gold, geometrical compositions of poured plaster and iron, and wisps of metal motifs embrace abstract art, poetry, and music in turn.  These orchestrations of form incorporate imaginative thought and more sturdy technical principles into a single vision, one where musical structures and geometries harmonize with reflections on the cosmos, Greek myth, or the “metaphorical lightness” of visual poetry.

During a speech made at the Rembrandt Prize, Milan, in 1973, Melotti reflected on this interest in “musical abstraction” of the figurative arts – “Slowly music has ensnared me, disciplining me with its laws, distractions and digressions in a balanced discourse,” he explained. Such musical undercurrents are evident in the harmonies and liaisons of his sculptures, which are titled after musical terms, such as Contrappunto XIII (Counterpoint XIII), Dissonanze armoniose (Harmonic Dissonances), and Tema e variazioni I (Theme and Variation I). This intangible component of visualized sound is key to Melotti’s craft, represented further in his gently suspended metal works, each grounded in metaphysical roots of order, rhythm, and proportions. 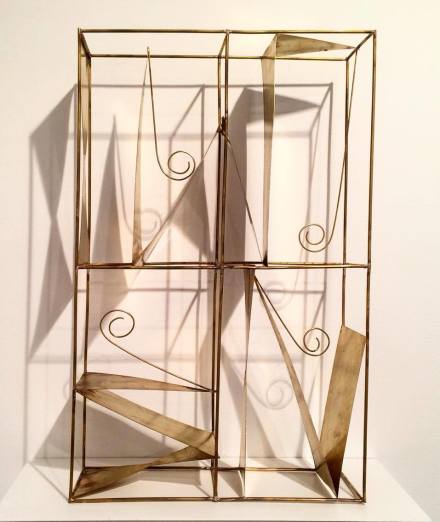 In pre-war Milan, Melotti worked among an artistic milieu, active as a contemporary with Gruppo 7, a circle of Rationalist architects including Gino Pollini, and a group of abstract artists associated with Galleria del Milione. During these years his indelible abstractions marked his interest in music and architectonic forms. Melotti sprang from the industrial innovations of Italy with a sense of lightness that separated his art from the proto-fascist visions inherent to the somber classicism of the “Novecento” movement. His abstraction was vital to this process, likening it to geometry and independent from language. 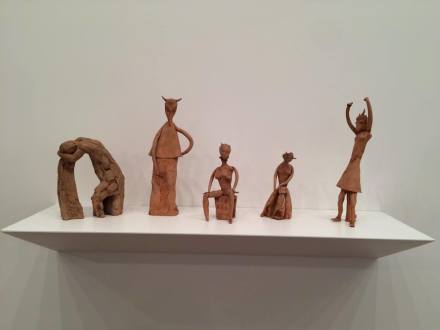 Following the atrocities of World War II, Melotti’s work returned to the human figure as a means to fill a void in humanity. He felt compelled to “represent figures of desperation” through intimately scaled terracotta devils and ceramic sculptures.  The artist sought to dramatically expel the “collective existential demons” through the cathartic elements of Greek dramaturgy and inimitable symbolism, expressed in his proscenium-like miniature theaters, which he called teatrini.

One ceramic theater known as Le mani (The Hands) (1949) has a scene in two acts: a pair of hands are suspended over a red mound and a brass outline of a face on two rods that recalls the sculptural facades of Joan Miró. The images are sparse but transcendent, as if designed to coexist in both bare material realms and within the pictorial spaces of Melloti’s art.  Furtive, yet enigmatically romantic, Le mani engages the viewer in a poetic tension.   The narrative is arcane, perhaps absent entirely, but the mood is compelling beyond a rational scale – equally fictive and spiritual. 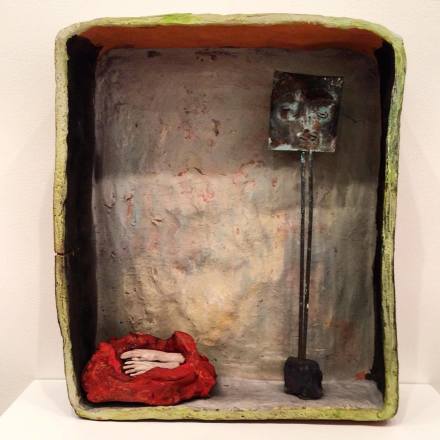 These teatrini, along with each of Melotti’s works, have been described as “memories of the soul,” rendering a universe in which allegory takes a seminal place in expression, where figures from myth and nature preside in ephermeral moments of becoming.  In a serial minimalism that anticipates the works of Donald Judd and Sol LeWitt, Melotti’s ethereal craft belies a complexity of subliminal weight.  His work has similarly been linked to the cage-like Surrealist constructions of Alberto Giacometti and the early scultura astratta series of Lucio Fontana, as each piece indicates a tensional, spatial mass within them. Beyond this, his work fuses various strains of 20th-century Italian art: the Futurist excitement for modernity, the metaphysical revelations of the Surrealists, and the material novelty of Arte Povera. 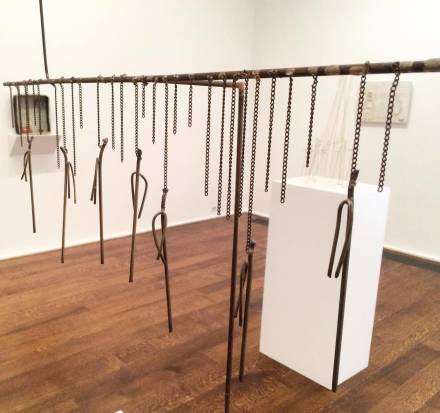 Melotti’s structures are remarkable for their fastened gravity in suspension. As curator Douglas Fogle opens in the show’s catalogue, Melotti’s is “a story of weightlessness… a very human, metaphorical weightlessness generated by the almost immeasurable poetic vibrations emanating from the most sensitive manifestations of literary and sculptural form.” Beyond their lissome frames, his sculptures possess a spirit of buoyancy that friend and contemporary Italo Calvino so revered. As the author describes in his review of a Melotti exhibition in 1981, his lithe works in gold dissolve the “full-void”— a burden of weight “so heavy that it crushes the world.” This sense well summarizes the artists work, confronting a universal burden with creations that are “light and quick and subtle,” triumphing the void of life and the weight of existence with a effortless suspension of matter. 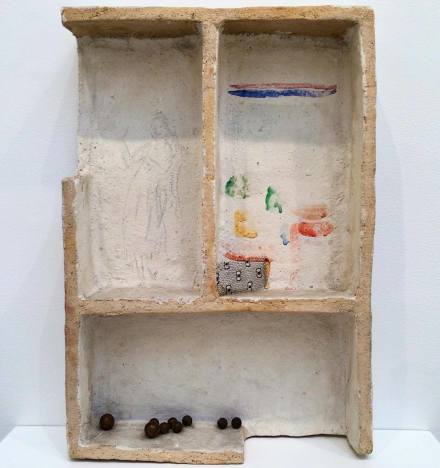 This entry was posted on Saturday, May 7th, 2016 at 12:00 am and is filed under Art News, Featured Post, Show. You can follow any responses to this entry through the RSS 2.0 feed. You can leave a response, or trackback from your own site.