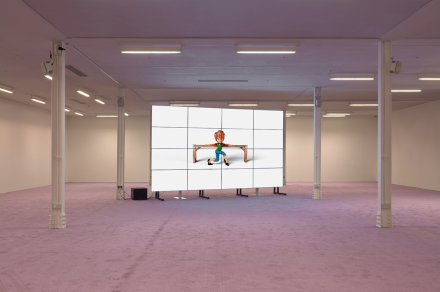 On view through June 17th, Jordan Wolfson’s first exhibition at Sadie Coles HQ spans both of the dealer’s London gallery spaces, with his new video work Riverboat song featured at the Kingly Street space, and a group of new sculptural and virtual reality works presented at the nearby Davies Street gallery.  Creating nightmarish scenes which often contain symbols that suggest a perversion or deconstruction of the American Dream, the artist’s work blends fantasy and reality into a chilling combination. 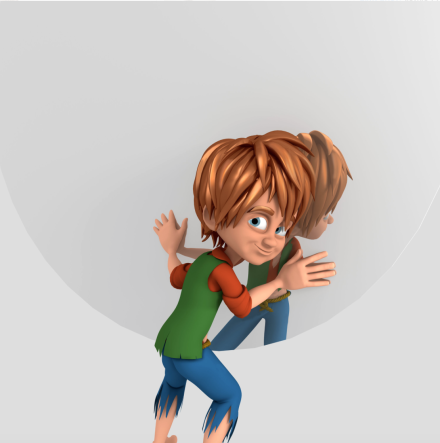 Over the past decade, Wolfson’s work has proven to be both controversial and timely— extremely attuned to the social and political climate. While his work transcends many mediums, including sculpture, video and performance, it is his recent explorations into the world of virtual reality that has garnered major attention, particularly after its inclusion in the Whitney Biennial this spring.

Throughout his practice he has continued to develop a series of thematic tropes, often creating constructed scenarios that reflect a convoluted sense of reality. Playing upon the viewer’s emotions, his works are highly visceral in their darkly fantastic aesthetic.  In the titular piece, Riverboat song, for instance, Wolfson combines animation, voiceovers, found internet clips and elements of pop culture to create an alternate whimsical reality in which a cartoonish Huck Finn protagonist acts as the artist’s virtual alter-ego.  At times the boy speaks a monologue delivered by the artist himself, and later dances to pop songs, thereby opening a discussion on ideas of identity for this child-figure.  Other characters that feature are a witch, CGI rats, a crocodile and a series of other grotesque animal figures. 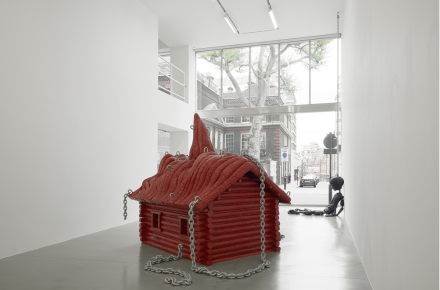 A large part of the imagery is suggestive of everyday internet imagery, including memes and avatars, devices Wolfson warps through his own aesthetic lens, highlighting the dichotomies of interiority and exteriority present in this sinister yet playful environment.  The interplay of sourced youtube clips alongside the almost hyperreal manifestations of Wolfson’s animations creates a work that is both fictive and extremely real, a work in which the artist’s role should always be questioned.  In one particularly graphic clip two men are fighting.  Shown towards the end of the film, the shot is quickly replaced by more animated and robotic-style clips. It is this segment of an attack, a real video, of a real attack that Wolfson found online that inspired the virtual reality work Real Violence. 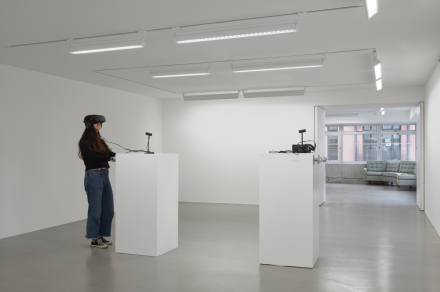 On view at the Davies Street gallery as well as at the Whitney Biennial in New York, Real Violence is a disorienting and unnerving experience in which the viewer is witness to an unexplained violent attack. While the piece is an all-encompassing virtual reality experience, where the viewer is directed to wear the virtual reality headset and headphones and to hold a rail on the plinth in front of them in case they suddenly jolt, the viewer remains very much powerless, someone who stands and watches a horrific event but has no ability to intervene or turn away (without fully taking off the headset and ending the experience).

A confusing and even alienating work, one is aware of the other viewers in the gallery space, which adds another level of watching and being watched, potentially even to the extent of feeling implicated in witnessing a violent crime. The image starts off in a disorienting orientation as well, gazing upwards to the sky while the voice of the artist reciting Hebrew prayers becomes louder. The gaze is then brought down to the ground where a man, again recognizable as the artist, takes a baseball bat and begins to beat a man on the sidewalk.  Immediately distinguishable as an urban environment on a beautiful day, cars drive by and there are few clouds in the sky, all while a man is attacked senselessly. The only escape from the blood and the sounds of smashing flesh is to close one’s eyes or to bow out of the work. 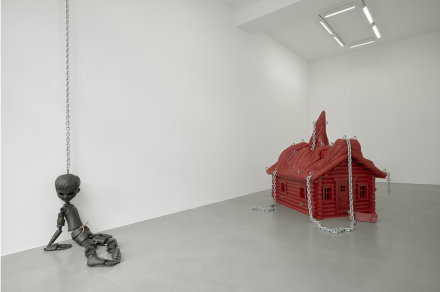 While the artist himself is an active participant in the work, the viewer’s role begins to be questioned.  Much of the unease one might feel in watching is whether to finish the video or to leave early, to even question which is the better option to refuse to bear witness to extreme violence or to refuse to entertain it.  In the sculptural works in the Davies Street space, Wolfson also explores violence but in its more mild forms, arguably more layered and thoughtful.  Black sculpture is a puppet-like boy who figures a similar cartoonish character as in Wolfson’s previous works, including Riverboat song.  With his legs splayed across the floor and his arms bound by metal chains, the theme of violence treads deep throughout the exhibition. The character falls within a similar aesthetic line as Wolfson’s earlier sculptural works, including Female figure and Colored sculpture, however, this work is static whereas the earlier ones were often dragged across the gallery floor. 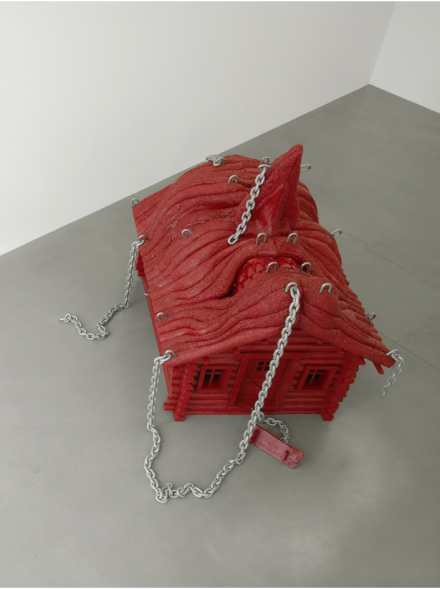 As Wolfson’s practice continues to develop, it is clear that he has a dark lexicon, drawing on symbols of distorted American fairytales and “real violence.” Reiterated and reworked many times, Wolfson’s cast of characters shed new light on contemporary issues. In House with face, Wolfson revisits the witch whose face is recreated in what appears to be a log cabin tied in chains. While he claims not to be a political artist, Wolfson’s work nevertheless mediates the violence in our world today, often blurring the lines between real and imaginary.  Few concepts could be more engaged, or engaging, in 2017.

Jordan Wolfson’s work is on view at Sadie Coles HQ through June 17th, 2017.

This entry was posted on Saturday, June 17th, 2017 at 1:48 pm and is filed under Art News, Featured Post, Show. You can follow any responses to this entry through the RSS 2.0 feed. You can leave a response, or trackback from your own site.