Taking over from Phillips steady sale last night in London, Sotheby’s launched its own take on the Contemporary Art Market, albeit one with a little more unpredictability. The sale, one of the first since Sotheby’s formally became a privately traded company, saw 5 of works go unsold, and one massive record, as Banksy demolished his previous auction high, ultimately landing the auction house at a final tally of £54,386,250. 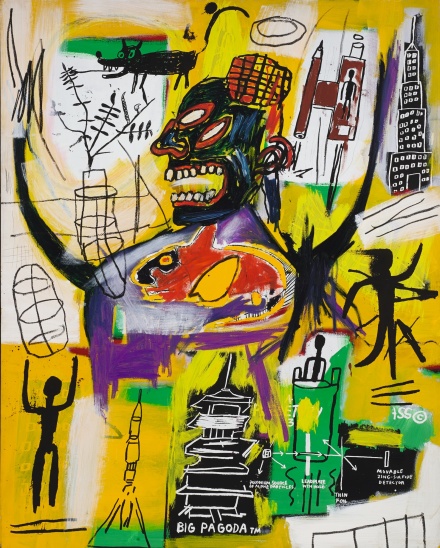 The sale kicked off in fine style, with a Nicole Eisenman work selling on multiples of its estimate to bring a final price of £639,000, followed up by a Piero Manzoni Achrome that sold just over its high threshold, bringing a final price £1,191,000. A Lucio Fontana a few lots later was also a strong performer, setting a new record for the artist’s sculpture at £2,535,000. Only a few lots later, Jean-Michel Basquiat’s Pyro hit the block, selling rather quickly at the steady price of £9,879,500. Marking one of the sale’s premier lots, it seemed to set the tone for the evening, one in which works moved quite decisively or not at all.

One of the few exceptions to this rule, however, was Banksy’s playful and, given the current disputes over Brexit in the British Parliament just down the road, particularly timely send-up of the national government, ‘Devolved Parliament.’ The work, which had carried early whispers at a reset auction record for the artist, exceeded all expectations, as several bidders chased the work beyond its £2,000,000 high estimate to drive it upwards quite quickly. The work ultimately hammered for an eye-popping £9,879,500 for the artist, a figure that places the artist among the most valuable living British artists, and sets a new world auction record for his work.

Few surprises were left following that sale, and the auction seemed to peter out somewhat after the Banksy sold, leaving a number of works drifting off unsold or moving quickly out of the room.

This entry was posted on Thursday, October 3rd, 2019 at 6:01 pm and is filed under Art News, Auction Results, Featured Post. You can follow any responses to this entry through the RSS 2.0 feed. You can leave a response, or trackback from your own site.