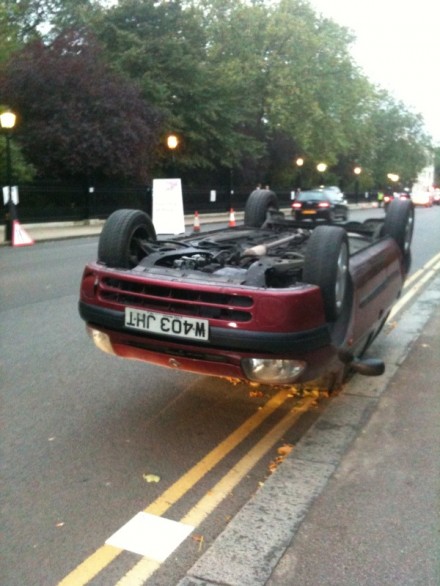 Art Observed is on site in London for Frieze 2010, which opened yesterday to a crowded VIP preview and featured 173 galleries (up from 164 last year) with reportedly over 2,000 works of art from 1,500 artists and likely between 50-75,000 people expected (there were 60,000 visitors at last year’s fair).  Since its inception in 2003, the Frieze Art Fair, founded by Matthew Slotover and Amanda Sharp, has become the center point for the most important week for contemporary art in London.  The fair is distinctive in that it is devoted entirely to living artists.

Sales at the fair:

The sales were robust for the VIP opening, but not at the frenzy of years before the recession.  Perhaps the most talked about sale was at White Cube’s booth, where a large Damien Hirst installation The True Artist Helps the World by Revealing Mystic Truths (2006) sold for £3.5 million or $5.6 million.  The work, which takes its title from a quote by artist Bruce Nauman, is a shelf work filled with fish and may have been the the most expensive work ever sold at the fair.  Very nearby at Gagosian, another Damien Hirst sculpture, a Viagra-tablet-filled pill cabinet was reportedly on sale for $6 million.

The Guardian reported that the Victoria Miro gallery sold the most expensive piece at their booth a Yayoi Kusama for $400,000.

Judd Tully at Art Info reported that Michael Werner Gallery sold Sigmar Polke’s work on canvas, Who Has Not, Who Will Again (1984) for a price in the $2 million range.

|
A sculptural work at the fair, photo by ArtObserved

Other notable aspects of the fair:

British-Japanese artist and winner of the 2010 Cartier prize is Simon Fujiwara (above).  Fujiwara is the creator of Frozen, which was displayed throughout the fair in various locations above and underfoot.   The work is “based on the fictive premise that an ancient lost city has been discovered beneath the site of the fair” and depicts archaeological digs and artifacts as an art world parody.

|
A another detail of Frozen, embedded in the floor of the fair, photo via Lattitudes

One of Gavin Turk’s bikes available for use at the fair, photo via Jim Clayton

Outside the fair, in the sculpture park, artist Gavin Turk organized 15 to 20 custom bicycles, where, for a deposit on a credit card, visitors can borrow a bike to ride around the Inner Circle of the sculpture park.  This year’s featured artists in the sculpture park include Hans Peter Feldman, Ceal Floyer, Marie Lund, Franz West, Jeppe Hein, Wolfgang Ganter and Kaj Aune.

A tattoo by David Shrigely being given at the fair, photo via ID Magazine

Inside the fair at Stephen Friedman Gallery, artist David Shrigley, known for his wry cartoons, and who is currently showing in New York at Anton Kern gallery, set up a tattoo parlor, with free, if still impermanent tattoos.

The artist duo Dexter Sinister out of New York’s Lower East Side collaborated with Shannon Ebner to create Reading Room which involves  a live talking room “from which reader’s voices will be broadcast both around the fair and around the world.”

Artist Anikka Strom conceived Ten Embarrassed Men (2010) for Frieze Projects in which a crowd of men (actors) move throughout the fair in a performance piece designed to bring light to the lack of women representation at the fair.  On this note, Lehman Maupin reportedly has over 70% of its works at its fair booth represented by women artists.

Art Observed will be continuing its coverage of Frieze week on site in London throughout this week. 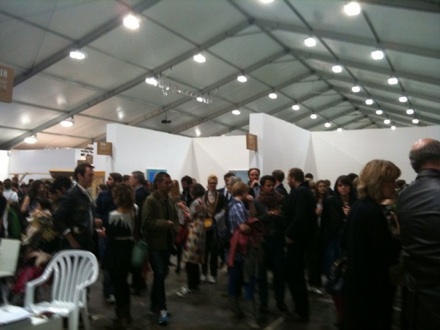 The crowds at the event, photo by Art Observed 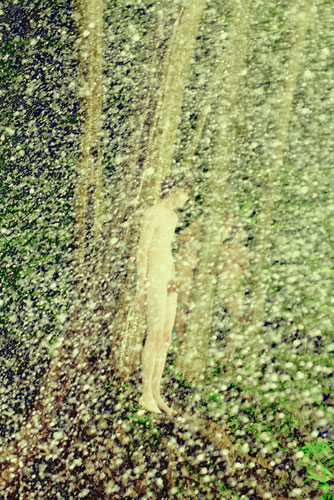 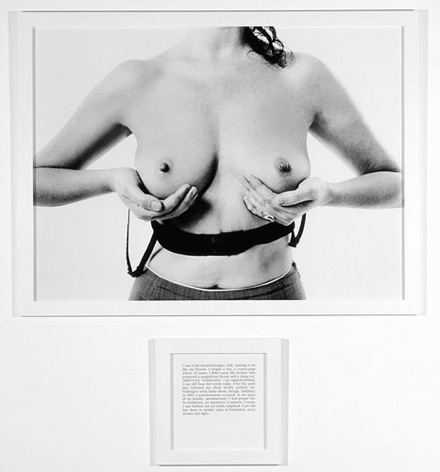 The artist Grayson Perry at the fair, photo via Juxtapoz

A view inside a sculptural work at Frieze, photo via Paraseleanor

A large Andreas Gursky for sale at White Cube, photo via ThisIsTomorrow

A work by the Havana-based collective Los Carpinteros (The Carpenters), photo via Tilly Tattle

A taxidermy work by David Shrigely at the fair, by Love Magazine

A light sculpture work at the fair, via Louise O’Reilly

A pickle on a podium, photo via Sunday Times Style

A view of the crowd at the fair, photo via Alice V. Jones

A Chris Ofili work at the fair, photo via This is Tomorrow

A Gabriel Orozco work at the fair, photo via This is Tomorrow

The crowds at Frieze, photo via LivinCool

A sculpture at the fair, photo via Motilo Fashion

Another sculpture at the fair, photo via Margot Bowman

This entry was posted on Thursday, October 14th, 2010 at 7:37 am and is filed under AO On Site. You can follow any responses to this entry through the RSS 2.0 feed. You can leave a response, or trackback from your own site.