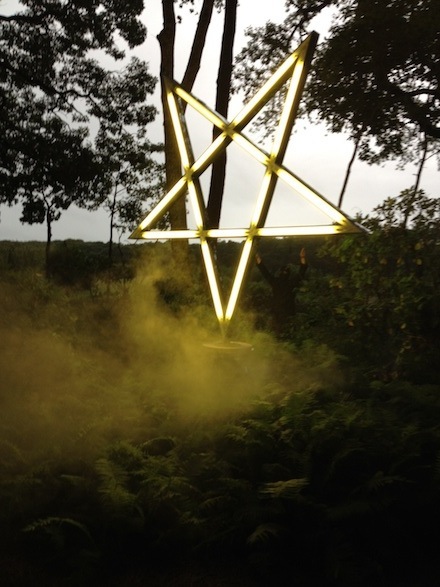 On Saturday, July 28th, the Watermill Center hosted The Big Bang, its 19th Annual Summer Benefit. Held on the performance art center’s expansive Southampton grounds, the event commenced with cocktails for over 1,200 guests, all of whom were invited to explore over twenty site-specific performances and installations scattered throughout the center’s indoor and outdoor spaces, as well as to bid in a silent auction featuring works by Marina Abramovic, Sandro Chia, Shirin Neshat, Dennis Oppenheim, Terry Richardson, Will Ryman, Spencer Tunick, and Aaron Young, among others. A tented dinner for over 650 guests followed, including a live auction led by Simon de Pury, where works by artists such Michelangelo Pistoletto, Anselm Reyle, and Willem de Kooning were offered. Inclement weather threatened the evening, with unwelcome downpours impeding the guests’ ability to view the outdoor works. Nonetheless, the event raised more than $1.5 million for the center, which has actively promoted the creation and dissemination of performance art since its founding by leading “theater artist” Robert Wilson in 1992. 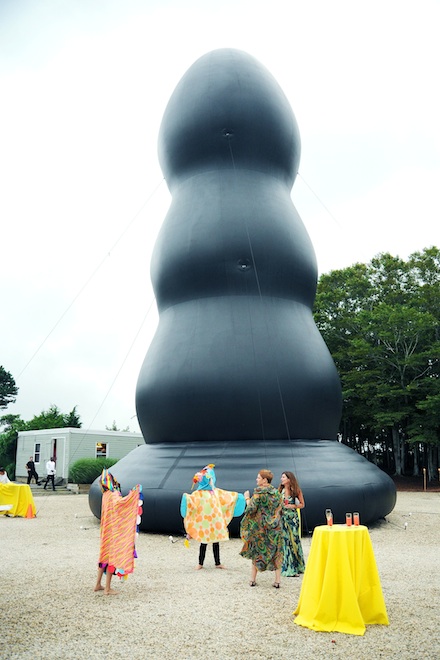 Upon arrival at the center, guests were immediately drawn into the evening’s theatrics. Indeed, the long, stepped path leading to the main building’s entrance was flanked by tall grasses and tiki-like torches, which took on an eerie glow in the fog. This sense of drama was only heightened by the speakers that punctuated the path, playing the kind of orchestral music one associates with the opening credits of a traditional big-budget adventure film. Ascending the path, guests were welcomed to the entrance of the main building by Misaki Kawai’s playful Big Bubbles – a sculptural installation featuring a cartoon-like figure with a giant bust. The subject of a solo exhibition at Malmö Konsthall in 2011, Kawai presented a humorous encounter between artwork and guest that ultimately set the tone for the rest of the works and performances on view during the evening. 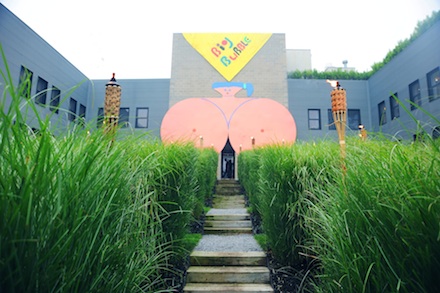 On the event’s main stage, set up behind the building, Paul McCarthy’s giant Butt Plug – a 60 foot inflatable rendering of the titular sex toy – swayed menacingly in the evening’s moody weather, a condition which effectively heightened the work’s power, turning the the sculpture into a performance of sorts. Guests crowded the silent auction tent, tippling and chatting, or braved the storm to explore the performances and installations in the surrounding woods, wandering a gravelly path flanked again by torches. Desi Santiago’s large-scale neon inflatable sculptures also helped to light the path, producing a Bruce Nauman-like sense of ominous humor. Santiago was recently lauded for his work in “Louis Vuitton Marc Jacobs”, at the Musée des Arts Decoratifs, Paris, where his subversive mannequin heads drew attention. 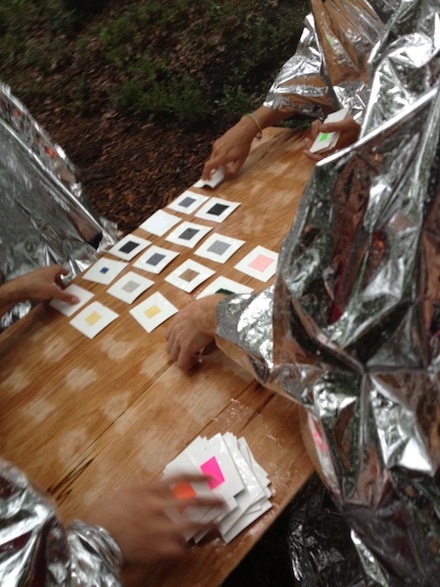 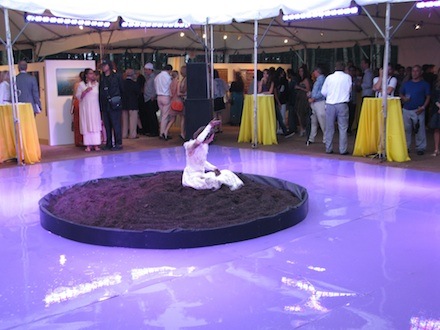 Other performances  – both ongoing and more brief – took place throughout the evening. In the center of the silent auction, Janice Lancaster Larsen performed her haunting Circuitous Graze. In a full-length white dress, the artist writhed elegantly and ecstatically on a circular plot of dirt, uncovered in the middle of the tent.  Here, too, the rain elevated the artwork to a dramatic, mesmerizing height. 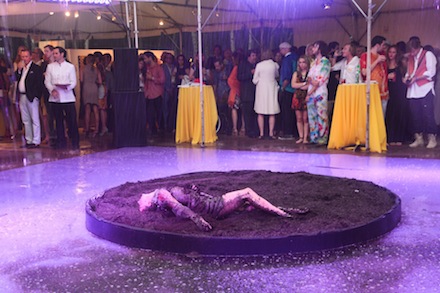 More boldly, Kembra Pfahler and the Voluptuous Horror of Karen Black, whose recent show at The Hole, New York, transformed the gallery into Monet’s natural muse, Giverny, took the stage to perform the highly sexualized, cult glam-punk act for which she has become known. The musical portion of the piece was topped by painted, naked women carrying a large male organ through the rain, a pop ritual that channeled the primal performances of Viennese Actionists such as Hermann Nitsch. 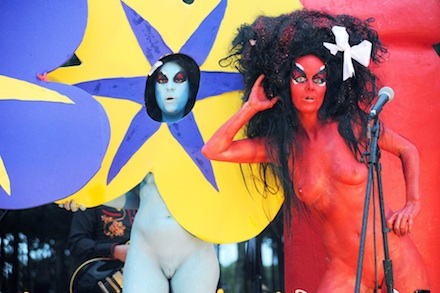 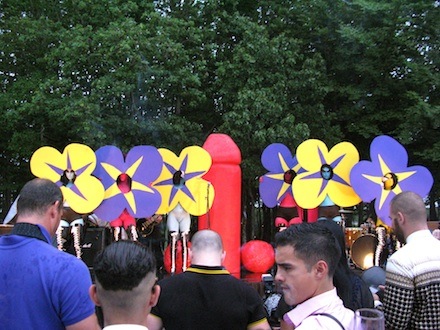 The exuberance of these festivities was tempered by the concurrent exhibition memorializing the late Mike Kelley, which guests were also invited to view in the main building. A prolific Los Angeles artist whose career arose in the 1980s, Kelley took his own life in February, much to dismay of his peers. Curated by Harald Falckenberg, the exhibition is a worthy one that deserves serious attention. It will be on view through September 16. 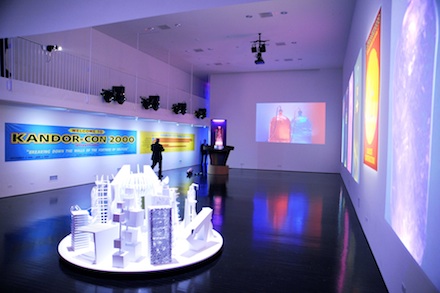 Installation view of “Mike Kelley” at The Watermill Center

“The Big Bang Theme was inspired by a painting of the late Paul Thek titled The Big Bang Painting. The Watermill Center administers the estate of Paul Thek. The Watermill Center administers the estate of Paul Thek. The late Mike Kelley was influenced by Paul Thek and wrote an important essay on his work and life, so that really is the launching off point. Paul McCarthy was a collaborator of Kelley’s and a mentor. Of course a 60 foot butt plug references another kind of big bang. The performative work of Kembra and her group ties into Kelley’s performance work in my mind and, of course, her aesthetic fits with the theme and counterpoints the large butt plug…In some ways everyone tied into Kelley but that is enviable given his diverse practice. All of the works had a big or a bang or a big bang so it worked on that surface level as well. The works also tied into one another. Misaki’s Big Bubbles with large breasts connected to Kembra, Desi’s inflatables tied to Paul McCarthy’s work. Dmitry Komis and I constructed a myriad of connections –  mundane, biographical, connections to mediums and histories.”

—written by A. Berman

This entry was posted on Thursday, August 2nd, 2012 at 1:59 am and is filed under Art News. You can follow any responses to this entry through the RSS 2.0 feed. You can leave a response, or trackback from your own site.