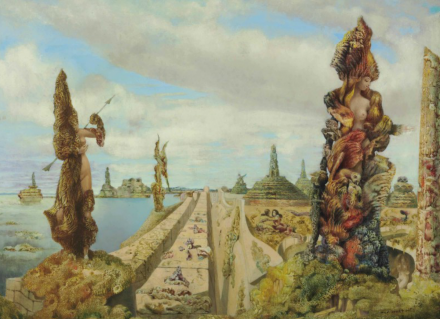 A marathon night has concluded at Christie’s this evening, following the auction house’s back to back sales of premier works. The sale provided an solid start to 2016’s winter and spring seasons of sales, and sends an indication of the market’s stability moving forward, even if the astronomical prices of the recent past were notably absent.  All told, the Impressionist and Modern Sale saw a respectable outing, with 12 of the 50 lots on sale going unsold, and reaching a total of £66,430,000, while the Surrealist auction immediately after achieved £29,487,100, with 10 unsold lots.

Following a passed on Camille Pissarro, the sale moved towards the meat of its offering, as a Paul Cézanne work stuck at the low estimate for £5,122,500, and a Chagall piece from 1928 also performed well, slowly creeping up on multiple bidders and gentle coaxing from Jussi Pylkkanen to just beat its £6.8 million high for £7,026,500.  One lot later, a Pablo Picasso just squeaked up to the low estimate, selling for £4 million.  Le Courbusier continued his strong recent performances at auction, bringing a final of £1,426,500.  A striking Egon Schiele followed in the next lot, reaching a final of £7,250,500, within estimate.  A Picasso canvas passed in the next lot before a slight pause to attend to a faulty microphone.

As the sales resumed, a series of passes pushed the sale quickly towards its conclusion, pausing for a solid £1,762,500 price for another Chagall, and a £1.2 million price tag for another Picasso in the next lot.  The excitement of the sale seemed to have waned by this point, however, as a Jawlensky portrait stuck at low estimate for £952,500, and another Chagall saw meager interest to just hit its £800k estimate.  A Pierre-Auguste Renoir work was also a late grower, beating estimate for a final of £3,890,500 after Pylkkanen played on slow bids and frequent pauses to push the work beyond its estimated range.  Another Cézanne from 1866-1867 also performed well, quadrupling estimates for a final of £1.2 million. 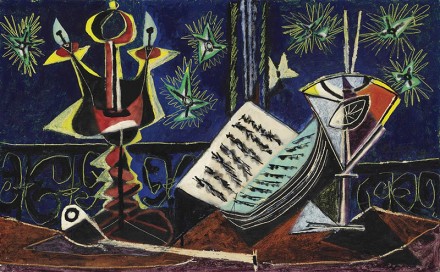 A string of passes closed out the evening’s sale, bringing a slight pause before the Surrealist sale got underway.  Somewhat subdued in its offering and in buyer interest, the sale moved briskly, with works moving or passing after only a few bids.  Of particular note was the Max Ernst cover lot, The Stolen Mirror, which sold below estimate at £7,642,500, a noted decline from the work’s record breaking price of several years prior.  Another highlight, Picasso’s Arlequin, sold below estimate several lots later for £1,426,500, as did Rene Magritte’s Mesdemoiselles de L’Isle Adam which settled at £1,986,500.  A late Salvador Dali was also a strong bid, bringing a final of £1,178,500.  The last major work of the evening, Miró’s Femme et Oiseaux Dans la Nuit, also managed to reach estimate, finishing within estimate at £5,794,500.

The sale coasted to a close following this lot, as a number of lower priced lots came and went to mixed success.  The sales will continue tomorrow evening at Sotheby’s.

This entry was posted on Tuesday, February 2nd, 2016 at 5:54 pm and is filed under Art News, Auction Results, Featured Post, Show. You can follow any responses to this entry through the RSS 2.0 feed. You can leave a response, or trackback from your own site.