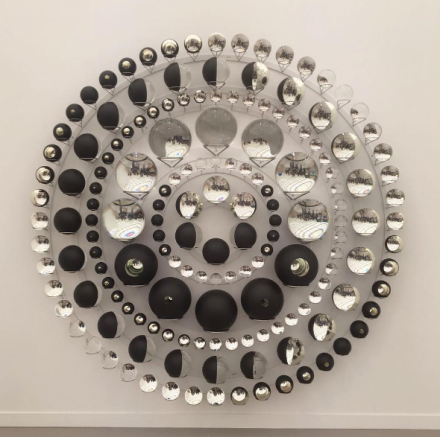 As the weather continues to heat up in New York City, galleries from around the globe have descended once again onto Randall’s Island in the northern reaches of the city, bringing scores of new works for the sixth edition of Frieze’s New York fair.  Marking the first week of an extremely busy month that sees dealers, collectors and the rest of the art world split between New York and Venice, the fair opened today as a first breath in a bustling series of events that nevertheless saw strong attendance and strong interest for the works on hand, with many dealers using the fair as an opportunity to capitalize on their artist’s presence at major exhibitions in the U.S., Italy, and elsewhere. 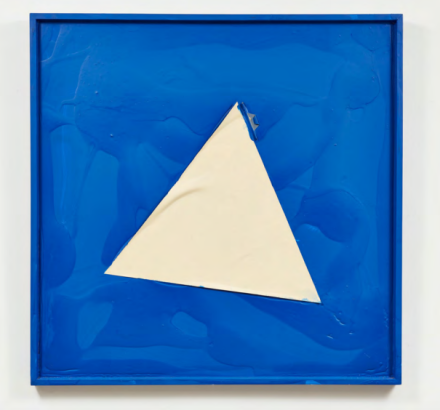 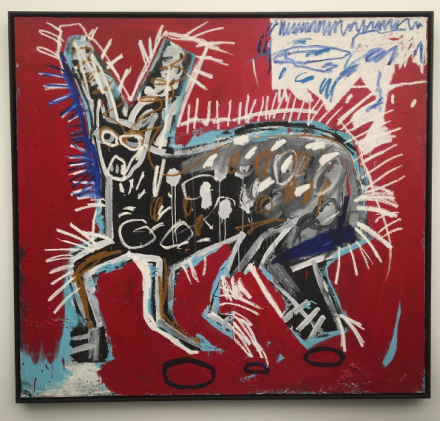 The fair has continued to grow over the course of its production on Randall’s Island this past half-decade, and this year is bringing a deep showing of 200 galleries, marking one of its largest editions since its founding.  Yet the fair also saw a distinct drop-off in collectors from Europe this year, as Venice and its demanding preparations likely saw some elect to stay home before next week’s bustling calendar.  Even so, strong sales were reported across the board, with many galleries seeing healthy attention in the early hours of the fair. 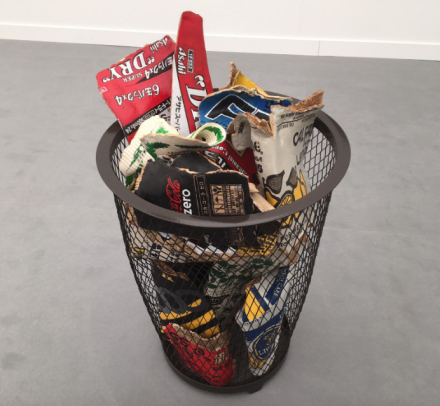 Kimi Yo Mishima at Gallery Yamani, via Art Observed 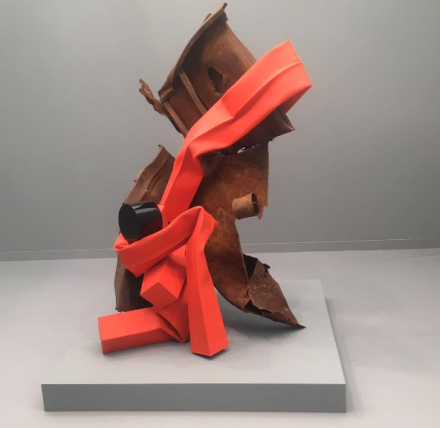 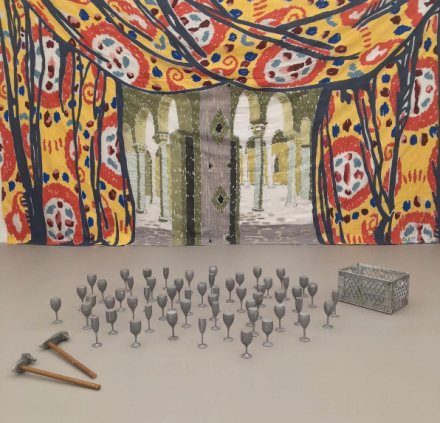 Ei Arakawa and Barry Johnston at Overduin and Co, via Art Observed

At Hauser & Wirth, Lorna Simpson had compiled a body of new works for her first outing with her new gallery, bold works drawing on deep hues and striking formal contrasts pulled from her divergent materials and photographic subject matter that highlight the artist’s definitive sense of composition in space, and the histories she draws on.  Elsewhere, Victoria Miro was showing a wide range of works by Elmgreen and Dragset, Yayoi Kusama and Doug Aitken, among others, while Tanya Bonakdar was showing a range of reflective glass works by Olafur Eliasson and Sarah Sze that managed to unify the artist’s divergent practices through simple material connections. P.P.O.W., showed a diverse selection of works by Charlie Ahearn, Anton van Dalen, David Wojnarowicz and Martin Wong.  Simone Subal also took home the distinction of best stand for galleries under 12 years of age, exploring works by Austrian-American artist Kiki Kogelnik. 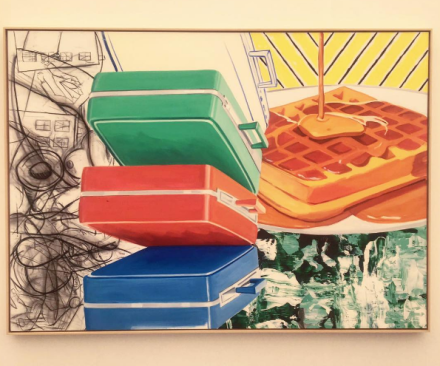 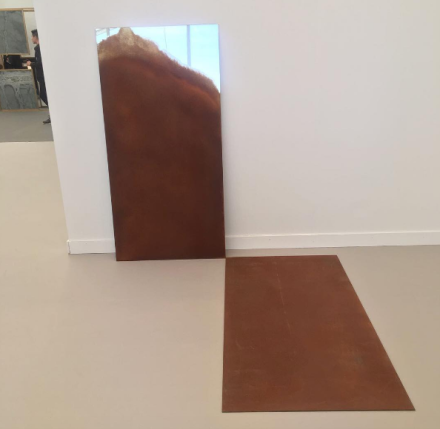 Alicja Kwade at 303, via Art Observed 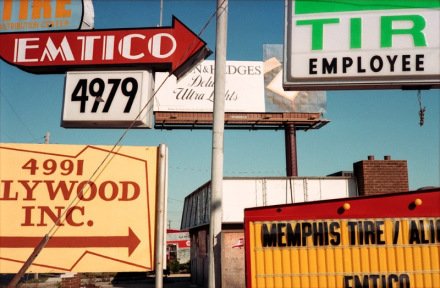 Dealer Leo Castelli was also on hand, presenting a series of historically significant works, including one of Robert Morris’s early felt pieces, Untitled (1970), as well as a microphone feedback work by artist Keith Sonnier, created with a set of closely placed microphones that created a sense of sonic tension in the space.  Also exploring more historical notes in the fair’s offering was Lévy Gorvy, exploring a body of works by Carol Rama, who finally gets her due at a New Museum exhibition across town this month.  The gallery also had work by David Hammons on view. 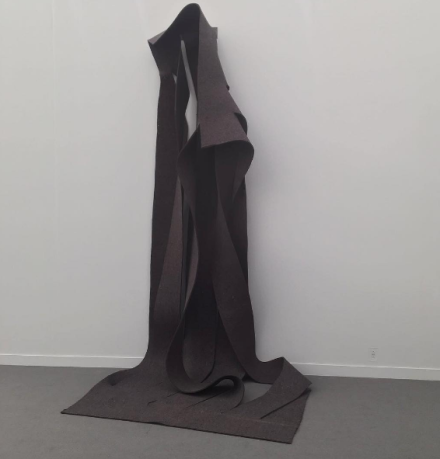 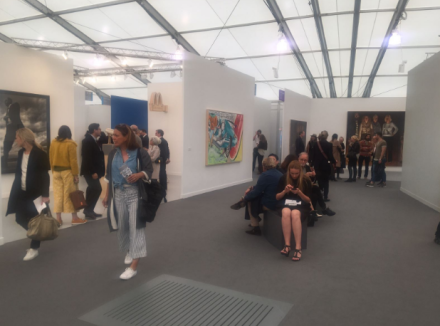 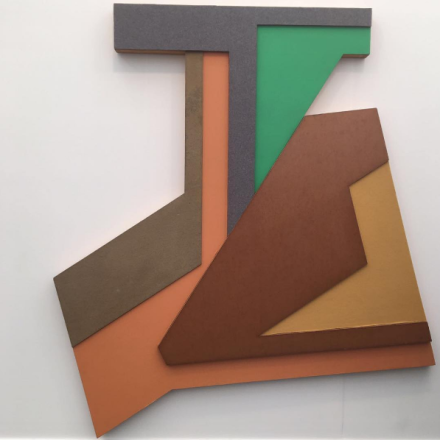 Elaine Cameron-Weir, who also installed a series of sculptures at the New Museum this week, was on hand, presenting a new installation culled from home-brew instructions for an air-raid shelter.  Playing on the paranoia of Donald Trump’s America, and concepts of militarized architecture, Cameron-Weir’s work offered one of the more unnerving works at the fair, particularly when considering the distended sense of the human form explored through the sculptures housed inside. 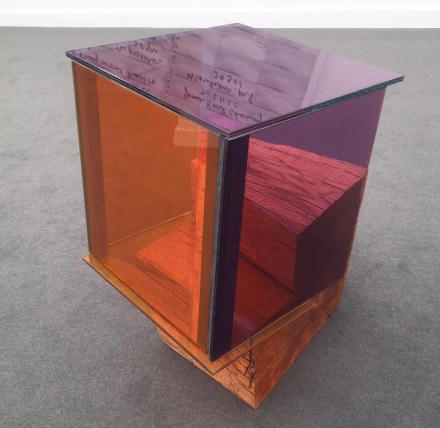 The fair had its fair share of political work throughout, with many artists taking their shots at the current presidential administration, a note that seemed particularly fitting as news of the health care vote passing caught many in the midst of the early hours of the fair.  Andres Serrano had a unique take on view Galerie Nathalie Obadia, juxtaposing images of Trump and rapper Snoop Dog in close opposition.

The fair is open through May 7th. 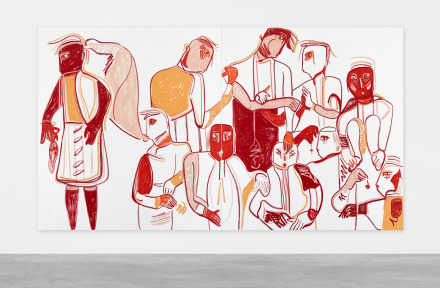 Melike Kara, the bastard of Istanbul (2017), via Peres Projects 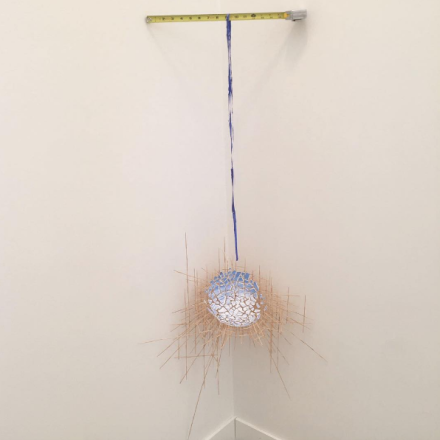 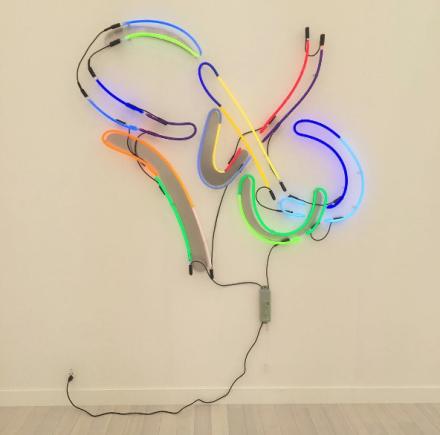 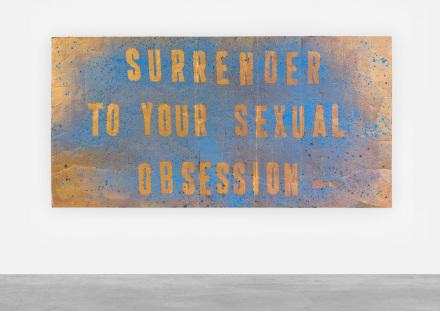 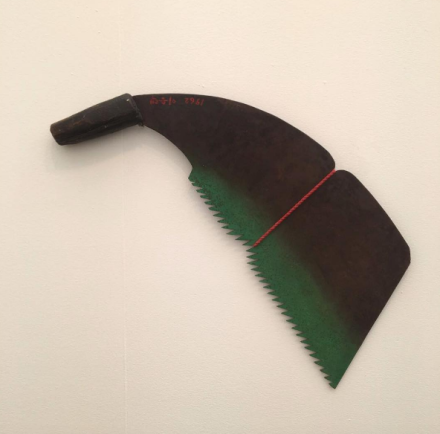 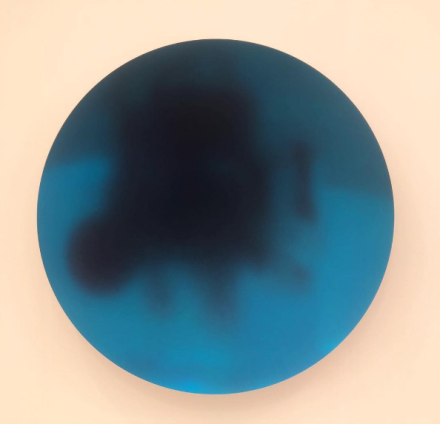 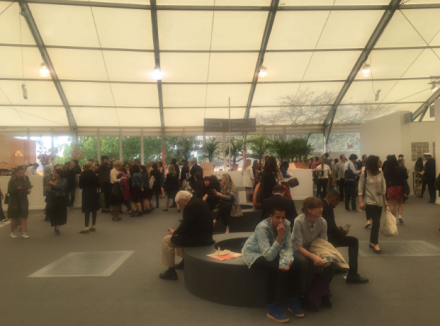 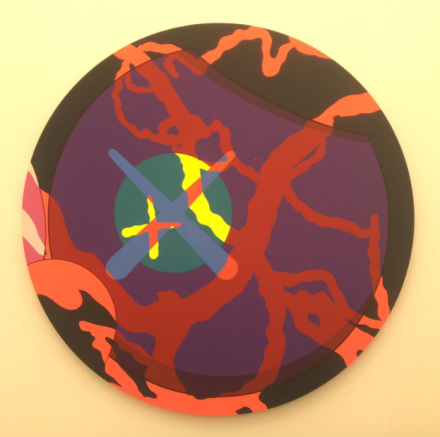 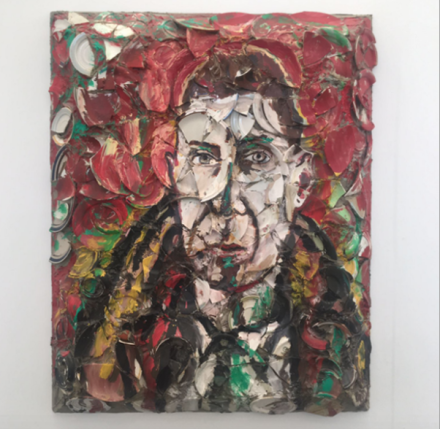 Julian Schnabel at Blum and Poe, via Art Observed 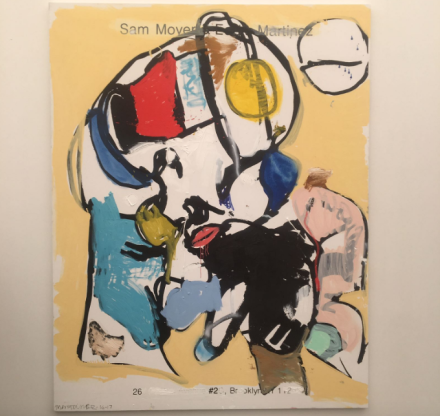 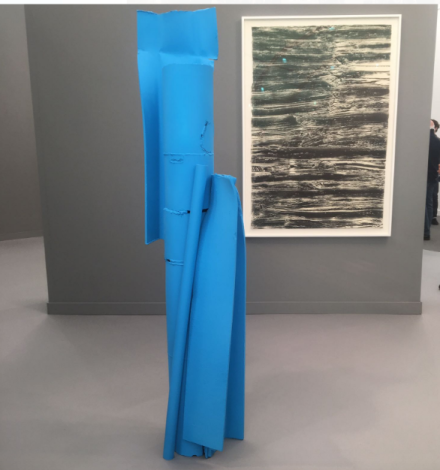 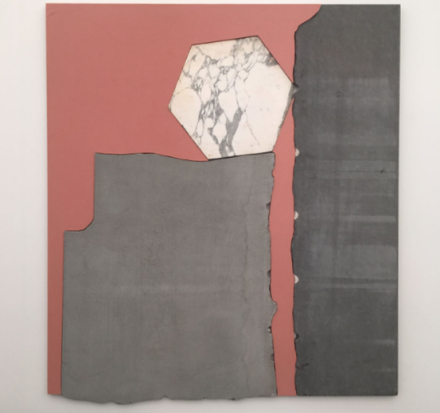 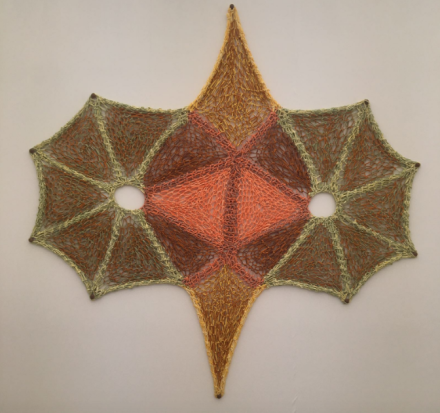 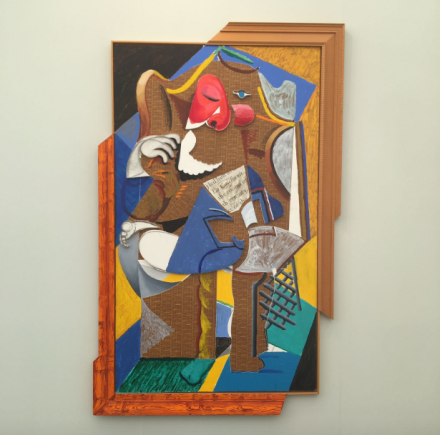 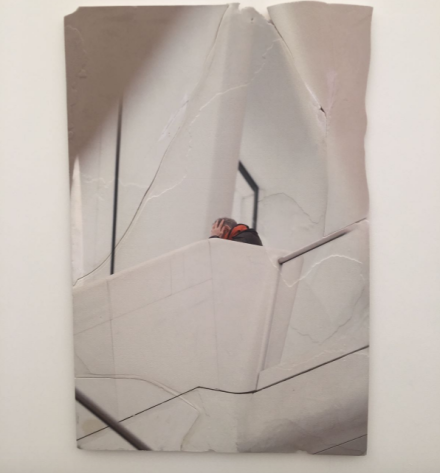 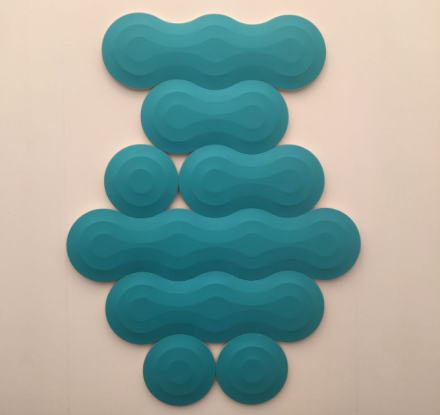 This entry was posted on Friday, May 5th, 2017 at 2:30 am and is filed under Art News, Featured Post, Show. You can follow any responses to this entry through the RSS 2.0 feed. You can leave a response, or trackback from your own site.