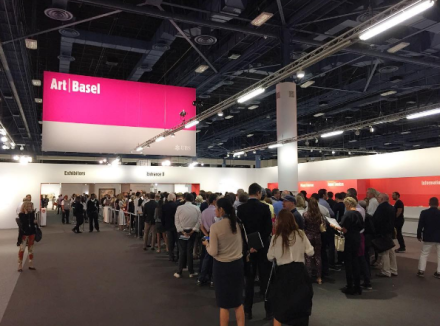 After a first evening of parties in both Miami proper and Miami Beach, the main event of Miami Art Week, Art Basel Miami Beach, has opened its doors at the Miami Beach Convention Center, bringing with it another round of special projects, talks, and other installations alongside the more traditional booths.  The 15th edition of the fair, which draws 269 galleries from a total of 29 countries from around the globe, was clearly feeling some tightness from a slower market, with shorter lines for the VIP Preview today, and less of a rush towards premiere works, but strong sales seemed to continue throughout the day, revealing a buyer pool that seems more invested than feverish. 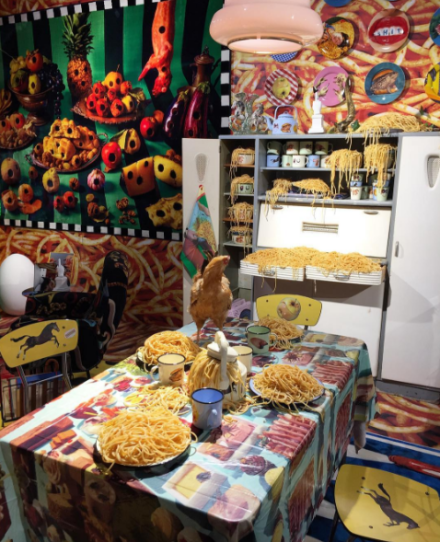 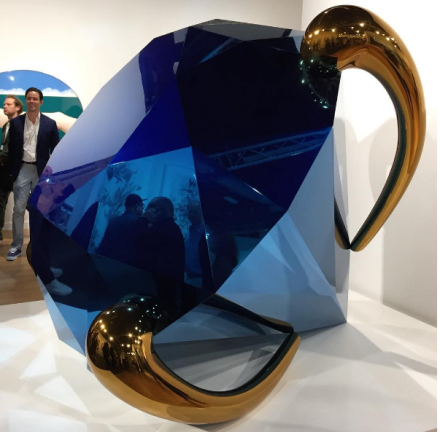 Elmgreen and Dragset at König, via Art Observed

That didn’t stop the fair, and its galleries, from going for big visual fireworks throughout.  For sheer visual impact, few could contend with the Fondation Beyeler’s annual project booth, this year given over to Maurizio Cattelan and Pierpaolo Ferrari.  Packing the booth with printed furniture, bedding, and copious amounts of spaghetti, the show commanded a steady stream of onlookers all day, wondering if the pasta pouring out of sinks, cabinets and walls was ever replaced.  That didn’t stop other galleries from trying, however, with Gagosian Gallery perhaps coming the closest in the most economical fashion; a massive Jeff Koons sculpture of a blue jewel gleamed in front of the booth, pulling in countless admirers.  At Eva Presenhuber, a similarly impressive effect was gained from a stripped back booth, where only a handful of Ugo Rondinone tree sculptures and cloud paintings made for a sparse, yet compelling visual space.  On a more political turn, artist Sam Durant was showing a massive billboard at Blum and Poe, branded with the text “End White Supremacy,” a bold statement in the face of a fraught post-election American political landscape.  The gallery also sold Broken Heart Bench, a 2006 work by Yoshitomo Nara, for $1.2 million. 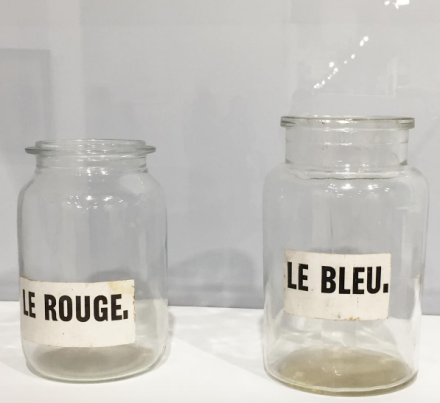 Other notable sales from the fair’s early hours included a Pope L piece from Mitchell-Innes and Nash, selling for $100,000, as well a Bridget Riley at Max Hetzler that sold for $1 million.  Sprüth Magers saw ample sales, with a series of Sterling Ruby works selling between $90,000 and $180,000, and one of Jonas Wood’s paintings of ceramic pots sold for $250,000 at David Kordansky. 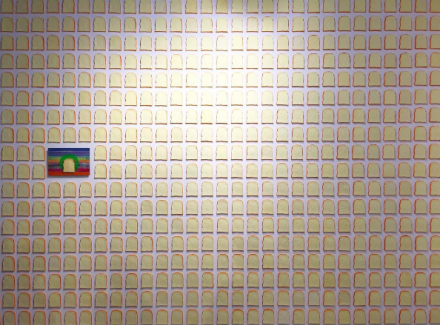 At Kavi Gupta’s booth, artist Irena Haiduk had created a candy store installation for the gallery’s Kabinett entry.  Inviting the Kraš Candy company to sell its wares at the fair, Haiduk’s work uses the company’s long history to mirror the turbulent past of Eastern Europe, noting the varied regimes that this company has made candies for, while selecting candies specifically to reflect the various regimes of capitalism, communism, and imperialism the past century has seen in the region.  Another Kabinett entry could be seen at Galerie Chantal Crousel, where a series of woodcuts by Allora and Calzadilla were on view, continuing their unique exploration of the medium and its capability to represent various modes of historical and aesthetic modes in tandem.  Elsewhere, a Kabinett section at Galerie 1900-2000’s booth showcased a series of small-scale works by Marcel Broodthaers, complementing the works by Tetsumi Kudo on view elsewhere in the booth through a subtle, yet well-traced historical lineage. 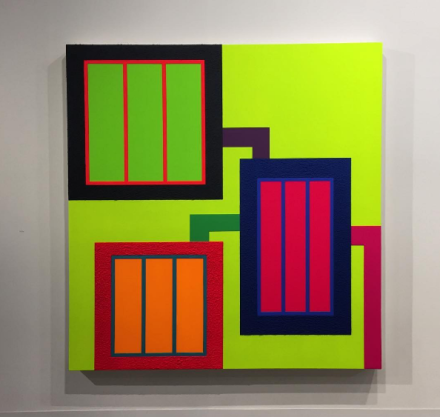 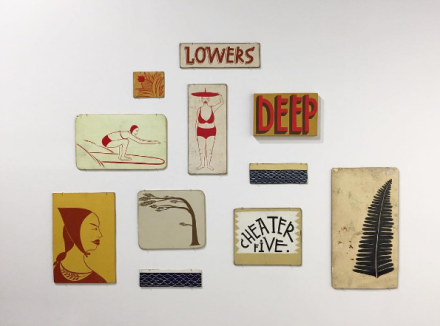 The Nova section continued its range of exploratory and innovative projects in one corner of the fair.   11R was showing a series of materially diverse works by Mika Tajima, incorporating steel, plexiglass and wood into enigmatic constructions, while Kaspar Müller’s hanging, hand-blown glass orbs at Société continued the Berlin gallery’s approach towards forward-thinking and formally compelling objects.   Also of note was a striking new work by Korakrit Arunanondchai on view at Clearing, a swirling mass of tree-trunks and resin that depicted a natural world in agony, twisted around a suspended rendition of the United Nations.  The work, drawing on the artist’s work at the Berlin Biennale this summer, is a striking new approach, pushing his fantastic, and often spiritually potent practice to a new level of formal innovation. 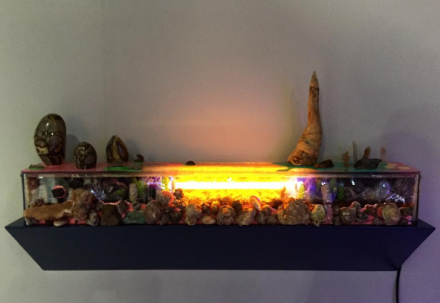 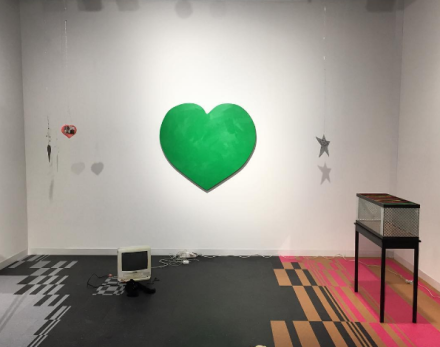 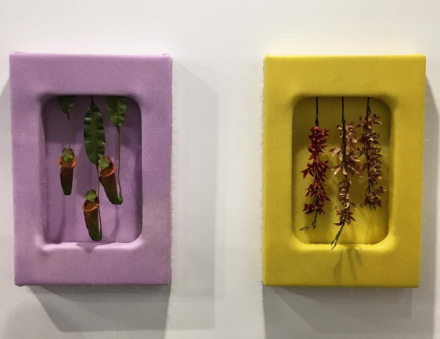 In another corner, the fair’s Positions section, which invites artists to present a single project or concept within the gallery booth, was also an strong draw, as High Art, a first-timer at the fair, was showing a series of “Trans-Habitats” by Max Hooper Schneider, small neon-soaked terrariums filled with plants, cassette tapes, and other comminglings of human detritus with flora and fauna.  Beijing’s White Space, by contrast, was showing a peculiar installation by artist Gao Ludi, punctuating a wall of fabricated slices of bread with a single painting, creating a hypnotic effect from banal subject matter.  Elsewhere, at the “Survey” section, Ratio 3 Gallery was hosting a subdued, yet powerful series of works by artist Margaret Kilgallen, who passed away in 2001.  Offering a moment to remember the artist and recall her impact on San Francisco’s art community, the booth was a quiet success over the course of the preview, drawing countless well-wishers and fans of the artist. 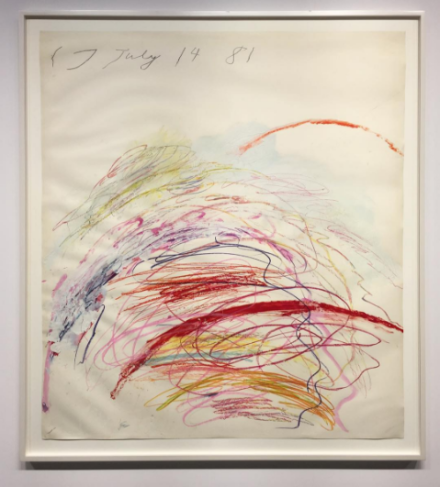 The Talks section will get underway on Thurs, with conversation between Julio Le Parc (currently showing at the Pérez Museum), and curator Estrellita Brodsky, as the artist reflects on his work and its evolution.  Other highlights include a conversation between Glenn Ligon and poet Claudioa Rankine, a writer who has been greatly influential on the artist’s work, led by Hans Ulrich Obrist, on December 2nd, and a discussion on the role of technology in the art world betweem Simon Denny, Whitney Museum adjunct curator Christiane Paul, Laurent Gavreau of the Google Cultural Institute, and more. 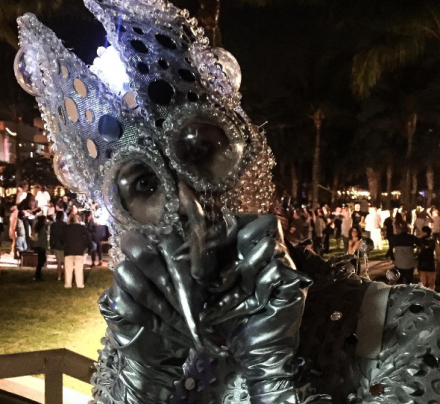 A performer at Lady Bunny’s Intergalactic Disco,  via Art Observed

That evening, up Collins Avenue, the fair also opened its annual “Public section, with a range of monumental sculptures spread across the lawns of the Bass Art Museum, allowing passerby to get a taste of the week’s influx of art to the city with a quick detour through the park.  Highlights included a fully functioning disco by Lady Bunny, meant to relieve the stress of the year’s turbulent political landscape, and a functioning grill inside a stretch limo by Rob Pruitt, allowing visitors to enter the limo and “chill” while enjoying BBQ by a trained grill-master. 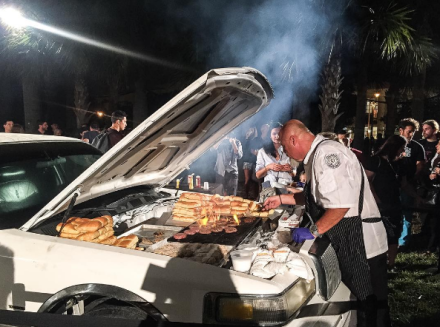 As the evening wound into the second night of parties on Collins Ave, H+M launched their special collaboration with Alex Katz at the Miami Beach EDITION, while later in the night, MoMA PS1 launched its week of parties with a special night of DJ sets by the Discwoman DJ collective, leaving attendees dancing late into the night. 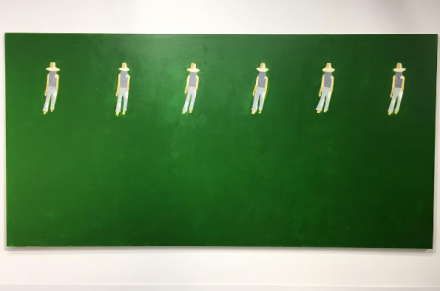 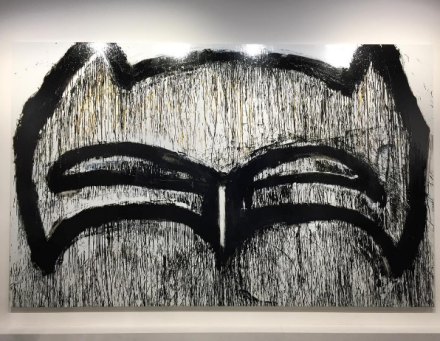 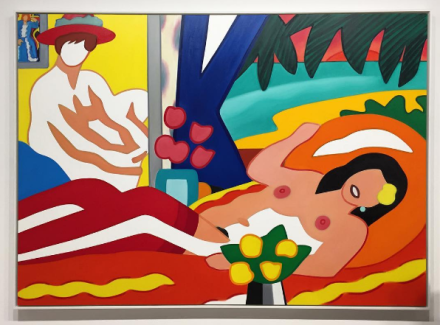 Tom Wesselmann at Mitchell-Innes and Nash, via Art Observed

This entry was posted on Thursday, December 1st, 2016 at 4:23 pm and is filed under AO On Site, Art News, Featured Post, Show. You can follow any responses to this entry through the RSS 2.0 feed. You can leave a response, or trackback from your own site.